Jim Hood is in a tough spot.

On one hand, the four-term attorney general is running for governor this year in a conservative Deep South state as a Democrat. He’s a member of a national party which has fought against conservatives in recent years to uphold a woman’s right to choose whether to have abortion. At the same time, he needs moderate conservative votes in November to stand any chance of winning.

On the other hand, he’s personally pro-life and is currently defending Mississippi’s “heartbeat bill,” one of the nation’s strictest abortion bans, in federal court through his role as the state’s attorney general. Oral arguments in that case were heard by U.S. District Judge Carlton Reeves on Tuesday. 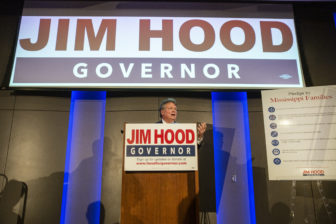 As his attorneys mount and implement a defense of the state law in court, anything Hood says publicly about the issue while the federal case is pending could jeopardize the state’s case.

As Southern states, including Mississippi, face widespread national scrutiny after passing abortion laws meant to stretch the U.S. Supreme Court’s interpretation of the law, and as his gubernatorial opponents cash in on the moment, Hood made his most forceful public statements on abortion this campaign cycle.

“The Bible states that God knows us in the womb (Jeremiah 1:4-5), and that’s why I’m firmly pro-life,” Hood said in a statement to Mississippi Today on Tuesday afternoon. “I have defended in court every single law passed protecting the unborn, including the 15-week ban and the most recent ‘heartbeat bill.’ As governor, I will defend the unborn and the laws of Mississippi.”

All three Republicans running for governor have put abortion front and center of their campaigns this week.

Lt. Gov. Tate Reeves, the GOP frontrunner who for several years has geared up for a general election fight against Hood, announced a pro-life coalition on Tuesday made up of more than 150 pastors and pro-life activists across Mississippi.

At the event on Tuesday, Reeves slammed Hood for muddling his stance on abortion.

“I believe a candidate for public office and someone who serves in public office that claims to be pro-life should be able to drive from Houston, Mississippi, to the federal courthouse in Jackson to defend unborn children,” Reeves said on Tuesday.

“The people of Mississippi want elected officials who stand up for what they believe in. Mississippi is overwhelmingly pro-life, and we need a governor that will be overwhelmingly pro-life and not just say, ‘I’m kind of that way, but I’m not going to let my feelings get in the way of doing my job.’ We need a governor who’s passionate about saving the lives of unborn children.”

After Reeves’ event on Tuesday, Hood defended that charge in his statement to Mississippi Today.

“It is disgusting to watch politicians beating their chests and trying to use this divisive issue to trick good, church-going folks into believing they or a party can do something about this issue,” Hood said. “The U.S. Supreme Court is ultimately going to decide this issue, not a state legislator.”

Both of the other candidates for the GOP nomination — Bill Waller Jr. and Robert Foster — have zoned in on the issue on the campaign trail this week.

“We have a moral obligation to protect human life,” Waller wrote on Twitter this week. “The Constitution gives us a right to life. More importantly, life is a gift from God that we should not forsake. As governor, I will always stand strong and fight to protect the right to life of the unborn.”

“If liberal governors and mayors can ignore federal law on illegal immigration, then it’s past time for conservatives to push back and enforce our states’ abortion laws, no matter what the liberal activist judges say,” Foster told Mississippi Today on Tuesday.

During his term as governor, Edwards signed a 15-week abortion ban, similar to a law Mississippi passed in 2018. This week, Edwards expressed his willingness to sign the more restrictive “heartbeat bill,” which would ban abortions about six weeks into a pregnancy.

While there is likely a path for a pro-life Democrat in Mississippi, progressives in Mississippi have already expressed disdain in 2019 for Democratic statewide candidates who support conservatives’ attempts to outlaw abortion.

In January, state Rep. Jay Hughes, a Democratic candidate for lieutenant governor, voted for the heartbeat bill and faced swift backlash from progressives in the state.

Black women are the heart of the Democratic Party. What will it take for them to be its face?

“Jim Hood is trying to play what he thinks is a politically savvy game of being on both sides and being non-committal so he can garner more votes,” said Laurie Bertram Roberts, executive director of the Mississippi Reproductive Freedom Fund. “What he fails to realize is this is not the time for that, and that Mississippians already did this deciding in 2011. Mississippians said no. So maybe he should lean into that a little bit and maybe grow a backbone.”

In 2011, Mississippi voters overwhelmingly voted against a so-called personhood initiative that would have amended the state constitution to say that life begins at conception.

Conservatives in eight states, including Mississippi, have already signed into law the “heartbeat” legislation, and several other governors in other states have promised to support similar efforts. The goal of conservatives is to get abortion back before the U.S. Supreme Court, which they feel is more conservative after two appointments by President Donald Trump.

Jim Hood, a self-styled pro-life Democrat, draws rebuke from the right and the left on abortion