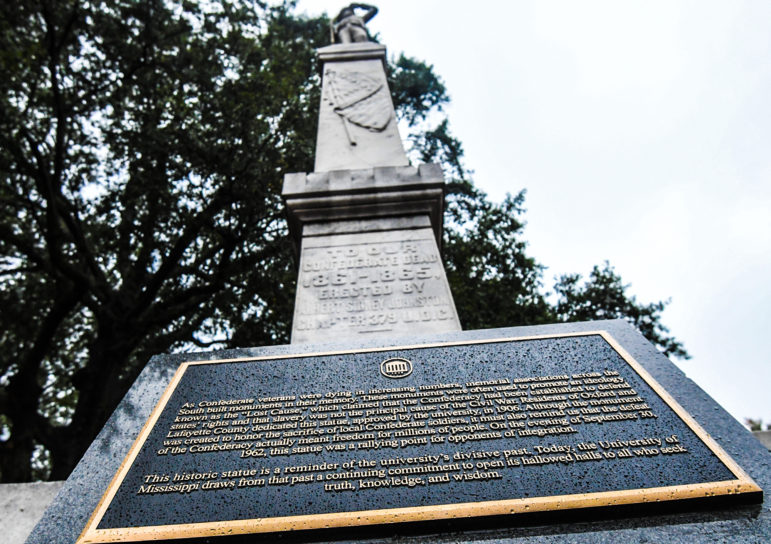 The Confederate monument at the Circle at the University of Mississippi, in Oxford.

Two political boards in Jackson will determine the fate of the University of Mississippi’s Confederate monument after university students, faculty, staff and administrators unanimously agreed to move the monument from the heart of campus.

Larry Sparks, interim chancellor of the university, announced Thursday he agreed with a student-led, faculty-sponsored effort to move the 30-foot Confederate monument from a prominent location on campus to a Confederate cemetery about a mile away.

“The shared governance process has demonstrated that our campus constituents are in alignment, and we agree that the monument should be relocated to a more suitable location,” Sparks said in a Thursday statement.

But before the monument can be moved, the boards of trustees at both the Institutions of Higher Learning and Department of Archives and History must sign off.

The university must submit an agenda item to the IHL board of trustees, the governing body of the state’s eight public four-year universities, for consideration. University officials did not say on Thursday when they would make that submission.

The next scheduled board meeting is April 19, but it is unclear if the board will take the item up during that meeting. The IHL board could, by statute, reject the monument’s proposed move.

“The Board of Trustees must approve moving historical monuments and memorials on university property, in accordance with Mississippi Code Sections 37-101-15 and 55-15-81,” said Caron Blanton, IHL director of communications, in a statement.

All 12 members of the IHL board of trustees were appointed by Gov. Phil Bryant, the first governor in the state’s modern history to appoint every college board member. Bryant, a member of the Sons of Confederate Veterans as recently as 2017, has brushed off questions about his stance on the monument’s proposed move. His office did not return requests for comment on Thursday.

University of Mississippi students who planned the monument’s move praised Sparks’ move on Thursday and expressed optimism that the IHL board would affirm the unanimous decision on campus.

“The IHL ought to respect the right of University of Mississippi students, faculty, and staff to make decisions relevant to our campus community,” said John Chappell, a senior at the university who helped plan and implement the move effort. “If the IHL declines to act in accordance with the consensus on campus, it will amount to a serious violation of university sovereignty.”

‘What we stand for as an Ole Miss family’: Meet the students leading a multiracial, bipartisan movement to relocate the school’s Confederate monument

Because the university’s Confederate monument is located in the Circle, an area on campus the state designated a “Mississippi Landmark” in 2011 because it was the setting of the 1962 riot when James Meredith integrated the university, a majority of the nine-member board of trustees at the Mississippi Department of Archives and History must vote to approve a permit to the university before it can move the monument.

The members of the MDAH board of trustees are self-appointed — a reality ensured by former Gov. William Winter — but individual board nominees first face confirmation hearings in the state Senate.

Among the members of the MDAH board of trustees is Mark Keenum, president of Mississippi State University.

University of Mississippi officials said they filed the proper paperwork with the archives department but pointed out that the process for relocation “will require some time.” MDAH officials did not say Thursday exactly when the permit process might be completed.

“MDAH has received a notice of intent from the University of Mississippi regarding the removal of the Confederate monument to another site on campus,” said Katie Blount, director of the Department of Archives and History, in a statement. “MDAH staff will review the plans and specifications for the move to ensure that they comply with the Secretary of the Interior’s Standards for Treatment of Historic Properties. Once the review process is complete, the issue will be placed on the agenda of the board of trustees.”

Ole Miss leader agrees Confederate monument should be moved, but political boards in Jackson must sign off