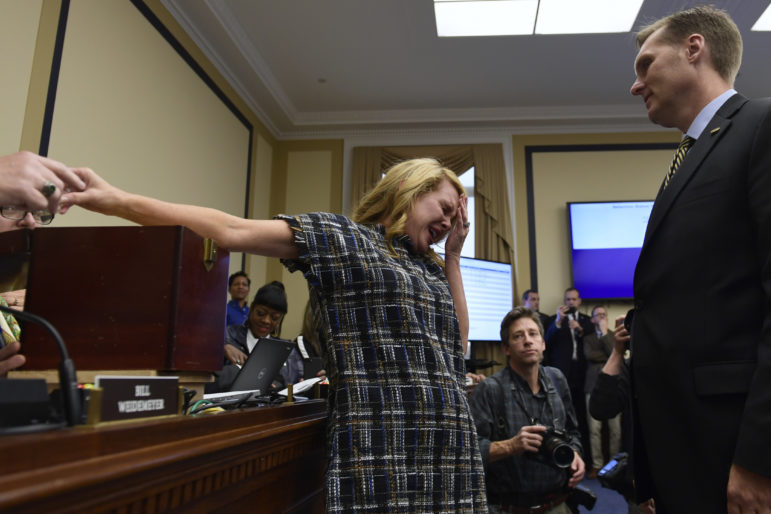 Rep.-elect Michael Guest, R-Miss., left, watches as his wife Haley Kennedy Guest draws his number during the Member-elect room lottery draw on Capitol Hill in Washington, Friday, Nov. 30, 2018. Guest drew 75 out of 85, which determines the order in which he gets to select his new Capitol Hill office.

WASHINGTON, D.C.—Five days after his swearing in, Mississippi’s newest U.S. Rep. Michael Guest sat with two friends at a table in the back of The Monocle, the venerable Capitol Hill steakhouse favored by the city’s political elite.

Sitting under signed headshots of presidents and congressional leaders dating back decades, Guest sipped beer from a slender pint glass. At the Monocle, seniority determines photograph placement, and the visages of two longtime Mississippi senators — Trent Lott and Thad Cochran, both retired—watched over Guest in the main dining room. The freshman congressman wore jeans, work boots and a fleece pullover, an ensemble within the dress code of the white table-clothed establishment albeit on the more casual side.

After he finished his steak and waiters cleared the table, Guest admitted his first week in office had been grueling. His family flew up for his swearing in, but their planned celebration was postponed. Dinner that night had been a quick bite between votes in the House chamber, where delegates stayed, working through legislation, until 10 p.m. The next days were shorter but just as busy, packed with more votes and legislation to review and invitations to join conservative caucuses.

“We come in, get sworn in at noon, and immediately go into a series of votes out there,” an energetic Guest told two reporters sitting a few tables over. “But it’s been going well so far.”

Guest arrives in Washington at a time when Congress has rarely been more divided or gridlocked, exemplified by the partial government shutdown that lasted a record-breaking five weeks.

At the end of his second week in office, Guest, who spent a decade as the district attorney for Rankin and Madison counties, talked with Mississippi Today about what he hoped to achieve over the next two years, at a time when national attention bypassed new Republicans like Guest to focus on the wave of progressive, diverse freshmen now part of the House majority.

This year, 111 new freshmen — 44 Republicans and 67 Democrats — entered the U.S. House of Representatives, the biggest class of newcomers since 1933, when the country was reeling from the Great Depression. And while some in media have suggested the Democratic shift in the House is a similar indictment of the Trump Administration, Guest called it an opportunity to work with new Democrats to achieve the president’s agenda.

“There are several incoming freshmen Democrats who are on the hall who I intend to reach out to to try to develop a friendship and a relationship with,” said Guest, whose first floor office in the Cannon is opposite that of U.S. Rep. Alexandria Ocasio-Cortez, D-New York, a young progressive Democrat and bete noire of conservative media.

“Any time you have strictly a partisan issue, those issues are much more difficult to navigate. But any time you can bring Republicans and Democrats together I believe that’s going to make it much easier for us to pass legislation to benefit Mississippi.” 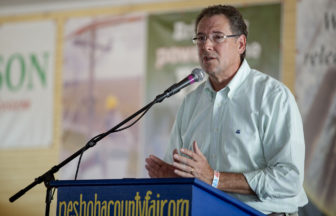 Former U.S. Rep. Gregg Harper, whose retirement at the end of the 115th Congress opened the door for Guest’s candidacy, pointed out that learning to compromise and make deals means learning how the U.S. House works. And that requires a few terms, not a few weeks.

“There’s a steep learning curve, especially when you’re in the minority,” Harper said. “It’s much more difficult, so he has to work through that. But Michael’s a very smart person and a quick study. He gets along with people, he certainly treats everyone with respect, even if it’s someone he doesn’t agree with. And that’s a very important trait to have in D.C.”

But fewer congressmen are achieving the seniority that allows them to make the most of this learning curve. Since 2007, the average tenure of House members has dropped steadily, from 10.3 years to 8.6 at the start of 2019. The average tenure of senators has declined, too, from 13.1 in 2007 to 10.1. Harper, himself, is an example of this. For many Mississippians, Harper’s announcement last spring that he would retire was a surprise, coming right when he’d achieved a measure of seniority and influence as chairman of the House Administration Committee.

But as Harper ascended the House ranks, he said his heart remained with his family at their home in Pearl. So Harper made weekly flights to and from Washington. Last year, Harper said with a laugh, he achieved Diamond Medallion status on Delta, meaning he flew over 125,000 miles within one year.

Guest said Harper’s experience was on his mind when he and his wife Haley discussed whether she and their sons would join him in Washington if he were elected. Former U.S. Sen. Trent Lott told Mississippi Today that he warned Guest, as he’d warned Harper years earlier, that success in Washington means living in that city. But ultimately the Guests decided not to uproot their boys, both teenagers. 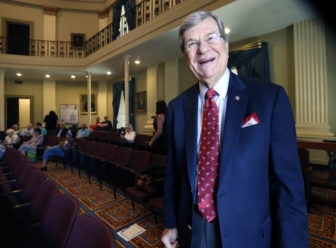 “I told (Harper) the same thing I have now told Michael Guest, and they didn’t listen to me. And that’s a mistake,” Lott said. “I brought my family and my wife with me. The job is in Washington, the job is not in Jackson.”

“Bring your family with you. And then you can go home every third week and work your district. But sleeping on a blowup mattress in your office, flying back home every weekend, is just brutal. Most human beings can’t endure that.”

Guest, for his part, doesn’t sleep on a blowup mattress. He rents a one-bedroom apartment in Capitol Hill. But as the conversation shifts from policy to his personal life, it’s clear the new Congressman’s thoughts are often with his family in Brandon.

“It’s difficult. As a parent you want to be supportive of your children, you want to be there. And while I think my children understand and they know why I’m here, it sometimes doesn’t make it easier, knowing that you’re not there in the stands pulling for them, or you’re not there running carpool,” Guest said. “That was one thing that I’ve always done was in the morning, my job was to run carpool, and my wife’s job was to run carpool in the evening.”

Guest pauses and looks down at his hands. “It’s hard not to be there.”

Lott, for his part, said he hopes Guest’s tenure in Congress is a long one. The longer the congressional tenure, the more productive.

“When I started out, I was an agitator… By the time I retired, I was known as a deal-maker and a compromiser. Well, yeah,” Lott said.

“To do business with people, you need to know them. You need to get dinner with them at night,” Lott said.

Guest has tried to get to know the lone Democrat in Mississippi’s delegation, Rep. Bennie Thompson, the new chair of Homeland Security. They had a brief introduction on the House floor and short conversations in committee meetings. But the sitdown meeting they had scheduled has now been twice-postponed for House votes.

In the meantime, other allegiances had been more quickly formed. In his first week he’d signed paperwork for the Congressional Prayer Caucus, which promotes many of the conservative Christian causes Guest campaigned on. Within a month, he’d joined two other conservative caucuses, the Pro-Life Caucus and the Border Security Caucus, in addition to the pro-poultry Chicken Caucus.

“What I want to do is I want to see and align myself with individuals through caucuses that will best benefit the people of Mississippi,” Guest said.

Back at the Monocle, not long after Guest left, two members of the restaurant staff approached a table. One thought he had heard the reporters address Guest as “congressman.” Had he been waiting on one of the Washington establishment’s newest members?

“He wasn’t wearing his pin,” the waiter said in accented English. “You know they all wear it when they go out. But he’s so new. Maybe he don’t know?”

The manager, who had joined him, smiled and shook his head. “He’ll learn.”

A Guest in a divided House: Mississippi’s newest congressman adjusts to life on Capitol Hill