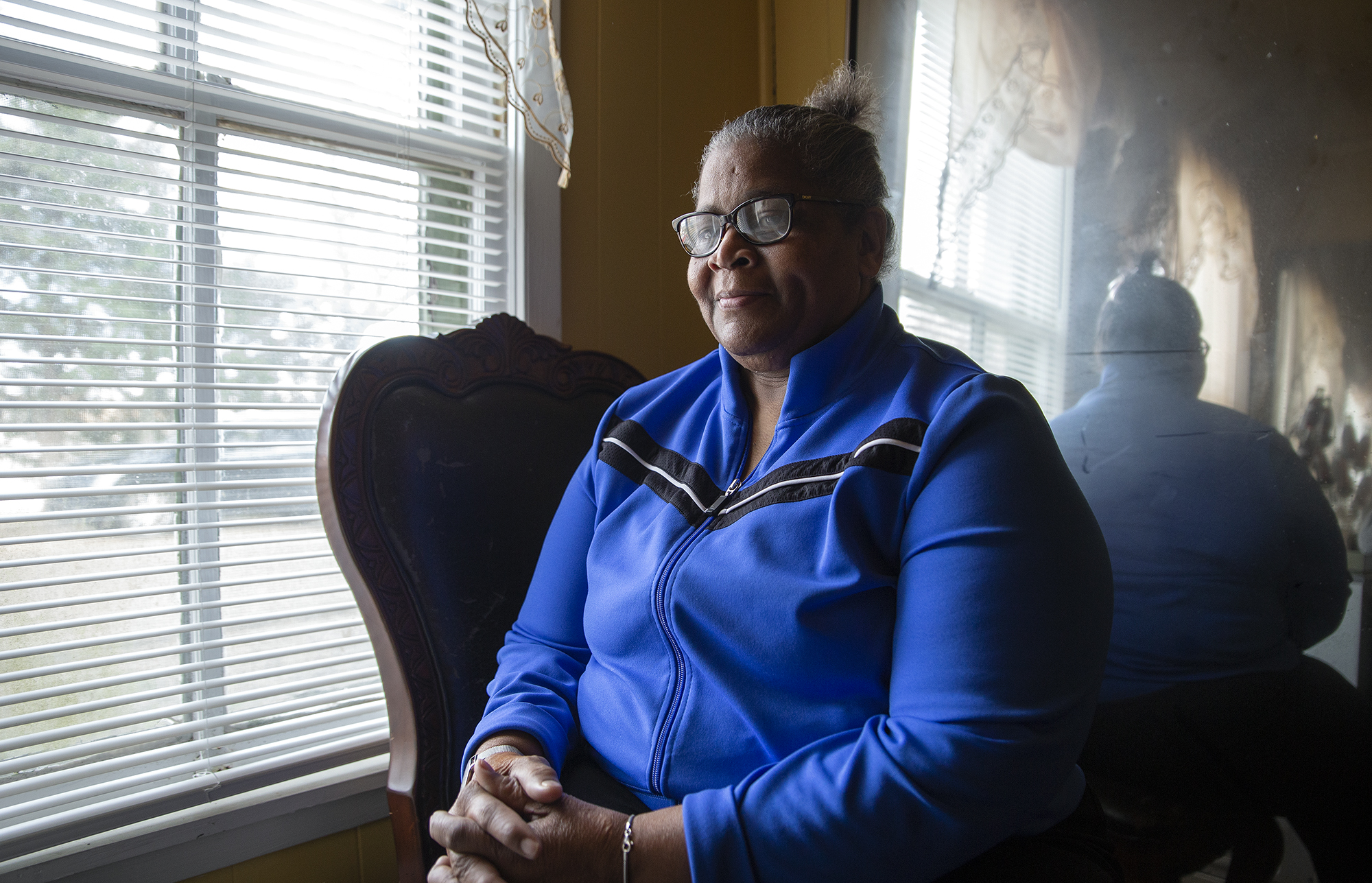 Clarise Martin, 62, has worked at the Adams County DHS office for 30 years. She is one of thousands of state employees whose salary falls far below her peers in neighboring states.

The assistance ensured that Martin, a substitute teacher and Family Dollar cashier, and her 16-year-old daughter, Tangelia, could afford food everyday.

During the meeting, an employee of the Mississippi Department of Human Services, which supervises state welfare programs, told Martin that she needed to work more in order to maintain her benefits.

“The two days a month substitute teaching is not going to cut it,” she recalls the worker told her.

At the time, President Ronald Reagan had popularized the welfare-queen trope, a now-debunked myth with racist connotations that suggested poor women on government assistance lived lavish lifestyles. With his rhetoric, Reagan, a Republican, primed the nation for a major shift on public benefits, which Democratic President Bill Clinton eventually implemented in 1996. The Clinton-era reforms gave more power to states and attached greater work requirements to assistance under the belief that employment reduces government dependency and erases poverty.

“We’ll put you on this program,” the human-services worker told Martin. “You’re going to have to work at least 140 hours a month in order to receive your $213 worth of food stamps.”

Martin began working three days a week as a clerk at both the local waterworks office and the same Adams County human-services department office where she received food stamps. Martin had attended Jackson State University and Copiah-Lincoln Community College for a total of two years, but she never finished a degree.

The work was unpaid, and even considering the food assistance she received, she was working for roughly $1.50 an hour. Minimum wage that year was $3.35. 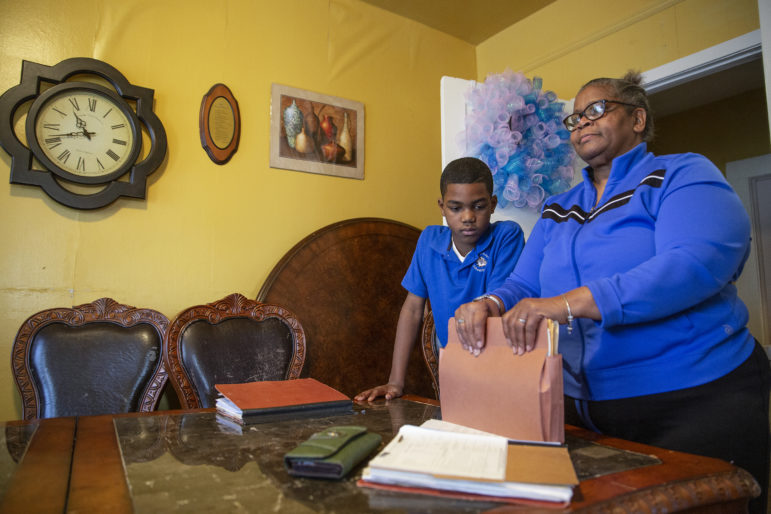 Clarise Martin, 62, and her grandson, Brionne, in the dining room of her Natchez home. Martin has kept a file of her tax returns dating back before 1989, when she got her first job at the Mississippi Department of Human Services, where she still works today.

That lasted for a while until the short-staffed welfare office hired Martin full time to answer phones and help clients with food stamps applications.

She jumped at a chance to work a regular 9-to-5 job that would provide work over the summer, unlike the Natchez school bus driving gig she had just taken on.

For Martin, stable employment couldn’t guarantee a life free from poverty. Shortly before she took the human-services agency job, Martin’s nephew, Thomas Richardson, then 26, was killed — shot in the head while sitting in the back of his car after a Natchez High School football game.

Martin still has the paperwork ruling his death accidental. The mother of Richardson’s two daughters — a 1-year-old and a 3-month-old — said she could no longer care for her children. Martin took in the infants, Tonisha and Brittany, and raised them until they were adults. In 1992, Martin gave birth to her second and last child, her son Tylon.

In 1992, the poverty line for a single mother of three was $13,950, several thousand more than the state was paying Martin to help keep the county’s human-services office running smoothly. The father of her children was not involved with the family and although she went after him for child support, her family never received any money because for decades, the father worked cash jobs, wages the state could not track. Martin said he recently started receiving social security, which the state has garnished.

“We just finally got a letter the other day telling us that they finally took $300 and some odd dollars from him, but it belongs to the state,” Martin told Mississippi Today.

Martin maintained her food stamps for just two months after starting at the human services office full time. She qualified for the assistance again in 2002 until eventually, a $2,500 salary increase in 2006 bumped her out of eligibility and her food assistance ended.

For example, all of Martin’s children played sports. She had difficulty attending away games, because she rarely had enough money for gasoline. After matches, the teams often stopped at McDonalds and Martin remembers not having money so her kids could eat with their friends. “That would be my most hard time,” she said, not because it was the family’s greatest financial hardship, but because it was their most visible one.

To bring some levity to the family’s situation, Martin would leave her wallet out and when her kids asked for pocket money, she told them to consult it like a Magic 8 Ball.

“The wallet says what? Zero,” Martin would say.

Meanwhile, she went to work dutifully to assist others with financial uncertainty. 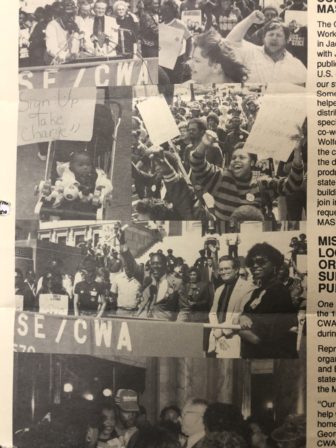 In 1990, Mississippi Alliance of State Employees held a rally to advocate for pay increases for state employees. Clarise Martin attended the rally with her adopted daughter Brittany, pictured in the stroller in a photo published in the March 1990 edition of MASE/CWA’s newsletter, “Solidarity.” At that time, Martin was earning roughly $9,000 in her job at the Adams County DHS office.

Now, Martin, 62, cares for her 10-year-old grandson, Brionne, while his mom Tonisha bounces to and from her correctional officer job at Louisiana State Penitentiary.

Martin is one of 28,000 state employees in Mississippi who have not seen an across-the-board pay raise from the Legislature in roughly a decade — although she and more than 4,000 employees who make less than $30,000 received a $1,000 salary bump in 2014.

“I see the raise as kind of a slap in the face,” Martin told Clarion Ledger back then. “I have worked seven straight years without any increase in salary or cost-of-living adjustment.”

Lawmakers will consider pay raises for teachers and all state employees during the 2019 session — and because it’s an election year, advocates are hopeful. Gov. Phil Bryant included pay hikes specifically for teachers in his budget proposal and a legislative budget outline adopted in December leaves an unallocated $790.5 million, which could be used for raises. Both Speaker Philip Gunn, R-Clinton, and Lt. Gov. Tate Reeves have said they were open to pay raises for state workers.

“I look forward to working with Speaker Gunn and our House colleagues to reward those dedicated public servants that are deserving of a raise,” Reeves told a press forum in Jackson this week.

In Mississippi, state employees make an average of $36,837, roughly $8,000 below the average state employee pay in the four neighboring states, $44,852, according to the Mississippi State Personnel Board.

“It’s in very poor taste,” Martin said. “Promises after promises, election year after election year, you’ve been told an increase is on its way.”

When accounting for inflation, Martin earns 40 percent more today than she did in 1989.

Martin’s current salary still puts her under the poverty line for a single mom of three today, despite her 30 years of experience.

“I’m living with just the basics,” Martin said, as she maintains a household and provides for herself and her grandson.

Martin gets paid twice a month, which she stretches to provide for her family. Her first check, of $531 after taxes, pays for her $430 house note and a $42 alarm system, leaving her with $60 to fill her gas tank and buy a few groceries — bread, grits, margarine — to last until her next check, more than two weeks later. Her second check goes toward utilities — electric, gas, water, cell phone — and other bills or necessities.

She tries to spend $150 a month on groceries, she said, but budgeting is hard with so little income and high probability of unexpected expenses.

Last month, her gas bill, which is typically $60, came in at over $100, squeezing her budget even tighter. On months where she’s short, she might rely on one of her daughters or their godparents to spare some money for bills or food. 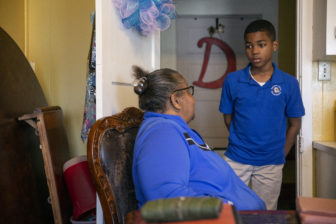 Clarise Martin talks to her grandson, Brionne, about their weekend plans while at her home in Natchez Friday, January 11, 2019.

The possibility of something breaking on her red 2009 Chevy Cobalt, which she bought from her sister recently and is her only means of transportation in a city without reliable public transportation, is a source of constant stress.

There’s not much left for entertainment and no opportunity for vacations.

When she gets her tax refund, Martin plans to take her grandson, Brionne, to a movie — a treat, she says, “for being such a great grandchild.” Brionne has also been asking for a new video game for his PlayStation, an expense Martin says he’ll will have to take up with his mom.

Martin lives in a house with orange brick and peeling teal paint near downtown Natchez. She bought the home in 2007 through a home-finance program that also allowed Martin to take financial courses, which helped her restore her credit.

In the past, Martin had used payday loans, which allow people with low incomes and those with poor or no credit to pay a fee for upfront cash, to survive between paychecks each month.

While other states are limiting the practice, payday lenders in Mississippi may charge 300 percent annual interest rates on these short term loans, which are supposed to be paid back after 30 days. But often, consumers get stuck in a cycle of loans that can take years to reverse.

“I was paying them more money (in fees) than I was actually borrowing from them,” Martin said.

For this reason, Rep. Jarvis Dortch, D-Raymond, will introduce legislation aimed at helping state workers like Martin. The General Pay Advance (GAP) Act would allow state employees to receive a pay advance from the state when hit with unexpected expenses.

Some Mississippi lawmakers have been reluctant to curb payday lending, with the thinking, Dortch said, that: “Yes, these products are pretty terrible, but they’re the only thing available to (poor) people in the state.” 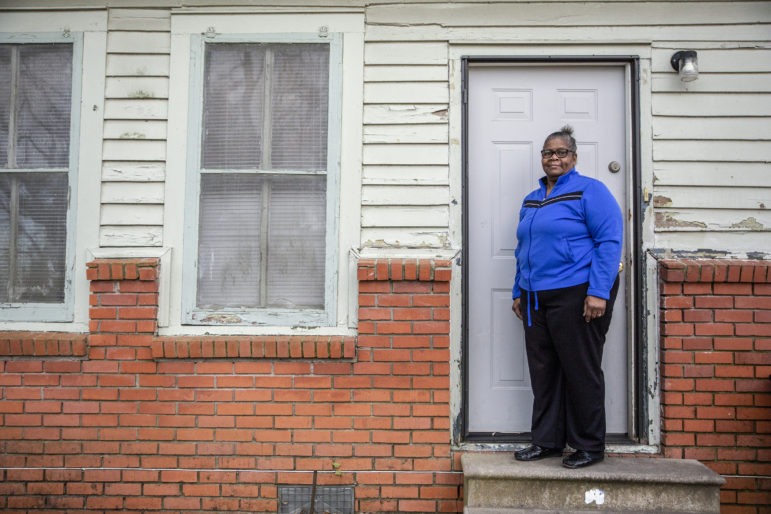 Clarise Martin, a 62-year-old state employee, stands on the steps of her Natchez home Jan. 11, 2019. If she were to receive a pay raise, she said repainting the exterior of her house would be a top priority.

The pay advance would allow state employees, whom Dortch calls “the people we don’t think about who make these agencies work” to borrow up to $600 against a future paycheck through an online application.

The state would not charge interest on the loan, but would require a one-time 5 percent processing fee to pay for program administration.

Brenda Scott, president of the Mississippi Alliance of State Employees, which represents state workers, said she is skeptical that the current Legislature has an appetite for such a measure.

“I just don’t have much faith that the supermajority cares much about how our state workers are surviving,” Scott told Mississippi Today, referring to the Republican-controlled statehouse. “Because if they did, they would have addressed a pay increase.”

If Martin were to receive a pay raise, the first thing she would do is hire a plumber to fix the hot water pressure in her kitchen. The second wish: A new exterior paint job for her house — she’s already picked a pale peach color.

‘Promises after promises’: State workers, stuck under stagnant wages, have no guarantee of life without poverty