HERNANDO — Before Rep. Robert Foster, R-Hernando, made his gubernatorial candidacy official Tuesday night, members of his own party pressed him to stay out of the race, including an offer of fundraising help to seek a different statewide post. 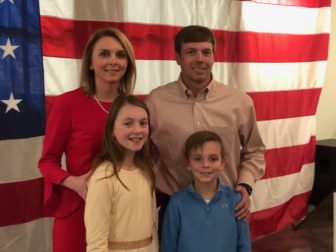 Rep. Robert Foster, R-Hernando, with his family at his announcement that he would seek the Republican nomination for governor in 2019.

Late last month, an operative with strong ties to the state’s Republican establishment called Foster and offered him a large sum of money to drop his rumored bid for governor, according to several people close to Foster’s campaign. The caller, they said, promised Foster they would help him raise $1 million if he ran for a statewide office other than governor. Foster declined.

Foster confirmed he received pressure from within his own party to drop out of the race for governor, but declined to discuss specifics.

“I’m challenging against an expected hierarchy. There’s people that have thought for a long time that this seat was theirs, and I feel like the people should have a right to decide that. I just want to give them a choice,” Foster told Mississippi Today after announcing his candidacy.

That choice is likely over Lt. Gov. Tate Reeves, whose $6 million campaign war chest has made him the front-runner in the 2019 race, although he has yet to officially announce his candidacy. In his seven years as lieutenant governor, Reeves’ unwillingness to negotiate on major policy proposals and his heavy-handed leadership style has created fault lines even within his own party.

Public clashes with Gov. Phil Bryant and Speaker Philip Gunn have prompted speculation whether his legislative beefs would spill over into the 2019 election cycle, sowing discord on which Democrats could capitalize.

Foster, a freshman lawmaker with little statewide name recognition or financial support, acknowledged to Mississippi Today that he’s “coming out of nowhere.”

“I do feel they are very concerned about the thought of someone like me challenging the governor’s race for a lot of reasons,” Foster told Mississippi Today. “I’m not scared to stand up and speak out against something I feel isn’t right. And I have a way of communicating with people. People may be surprised. I think time will show there is a lot more support for me than you’d expect.”

Asked if Reeves was concerned that Foster’s bid could be a stumbling block on his way to the Republican gubernatorial nomination, his office downplayed concerns while tacitly admitting he would be running.

“Lieutenant Governor Reeves already won four statewide elections, including two very tough primaries, and he is confident he will win his next primary because of his strong record of delivering conservative results,” said spokesperson Laura Hipp. “There were at least four folks in the (gubernatorial) primary the last time Mississippi had an open seat so this year could be a broad field.  It’s great to live in America.” 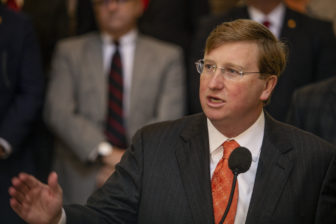 In introducing Foster, Hernando Alderman Mike McClendon said the candidate is “not part of any establishment. He is his own boss.” Across the room a campaign poster covering an entire wall described Foster: “Man of Faith, Conservative Outsider, Farmer.”

Reeves’s finances and name recognition will help his chances. But for some voters, Reeves represents mainstream Republicanism — baggage that they say a “fresh face” like Foster doesn’t have.

“It turns me completely off,” said Joe Morton, a Tippah County resident who attended Tuesday night’s event. Morton said he didn’t know Foster personally but had become familiar with him through Facebook, where the lawmaker’s post about veterans and hunting are interspersed with rants about “socialism and anarchy.”

“(Foster’s) not a politician. I mean, he is, he’s been elected once so far. But he’s fresh. He wears jeans and he’s not looking to inherit the job as his opponent is,” Morton said. 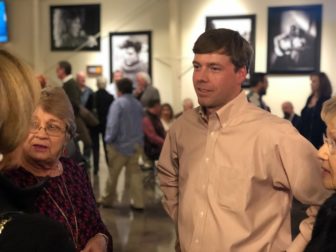 This is likely to play well in DeSoto County, too, where another candidate who ran with an outsider mantle, President Trump, got 65 percent of the vote in 2016. In 2015, when Foster was elected to Legislature, DeSoto voters elected six new Republican House members, four of whom unseated incumbents in the Republican primaries. Only one incumbent, Bill Kinkade, R-Byhalia, a resident of nearby Marshall County, kept his seat.

By starting at a considerable fundraising deficit, Foster plans to use social media to  spread the word about his campaign.

“Money can only go so far. Social media is a leveler in the realm of spreading messages that’s free, inexpensive,” Foster said. “And it can be completely free if it’s organic, if there’s enough people out there ready for change, which I think there are, the message will get spread with a lot less resources financially.”

But even Foster’s biggest supporters acknowledge he’s a long shot.

“He definitely has a chance—with who his opponent may be. It will be interesting to see the dynamics,” said McClendon, the Hernando Alderman who introduced Foster on Tuesday night. “Because you’ve got one who is a leader and one who was just elected. It’s a real David and Goliath situation.”