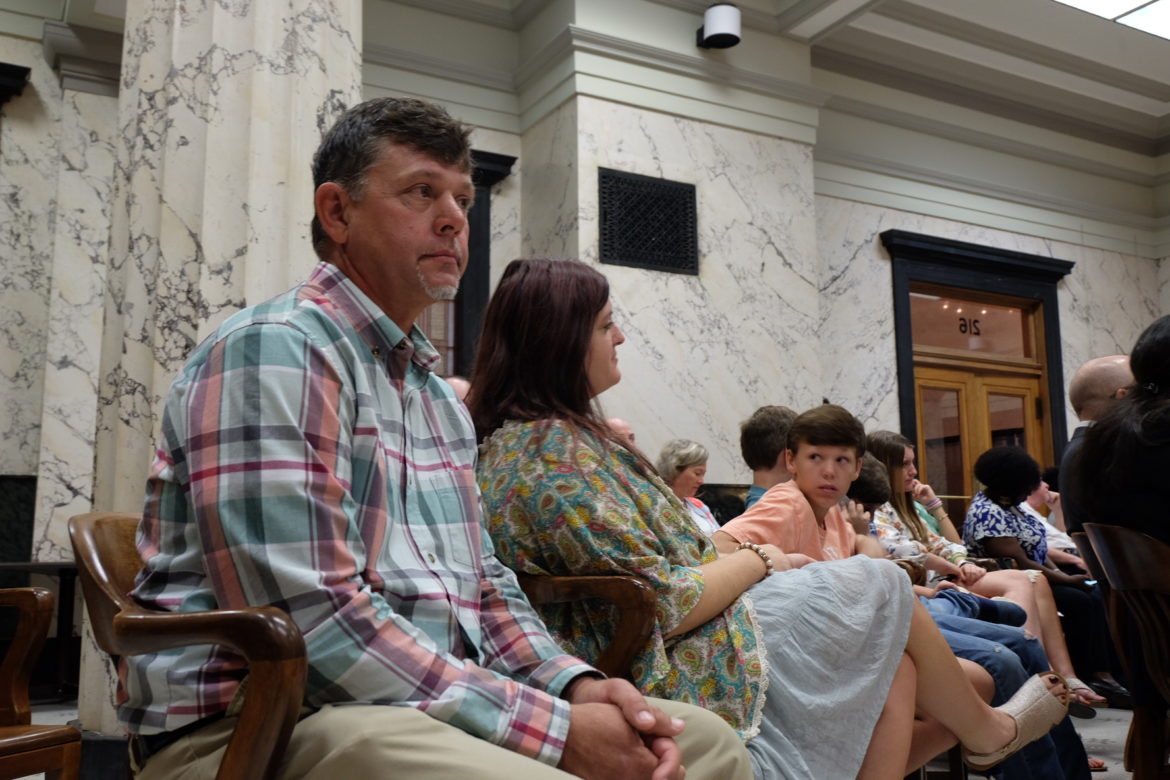 Dennis Hopkins with his wife and children at a hearing held by the Senate Judiciary B committee on Friday, Oct. 5, 2018 on Mississippi's lifetime voting ban for people with felony convictions.

Dennis Hopkins is, by his own admission, a towing business owner, a registered foster parent, a children’s football coach, a former fire chief — and a branded man.

That’s what he told state legislators at a hearing Friday morning concerning the history and impact of Mississippi’s lifetime voting ban for people convicted of felonies. Hopkins, who was convicted of grand larceny in 1998 and completed a prison term in 2001, still cannot vote due to that conviction.

“I am concerned that my children are growing up without a strong sense of civic duty because their father has to sit out every single election,” Hopkins, who was accompanied by his wife and six of his nine children, said.

The hearing spotlighted two lawsuits currently pending in federal court filed by the Mississippi Center for Justice and the Southern Poverty Law Center. Both suits challenge how the state disqualifies people from voting following a felony conviction; Hopkins is a lead plaintiff in the SPLC class action suit.

Held by the Senate Judiciary B committee, the hearing opened up a conversation about whether Mississippi may to restore voting rights to thousands of its citizens through a legislative solution, as opposed to responding to litigation. Only a pardon by the governor or an act by the legislature can restore a person’s right to vote.

Mississippi is only one of four states, alongside Florida, Kentucky and Iowa, that permanently bans people with felony convictions from voting. National attention is currently turned to the state of Florida, where a referendum this November could restore voting rights to people who have completed sentences for felony convictions, re-enfranchising some 1.5 million Floridians. 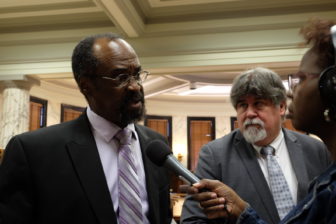 Roy Harness after a hearing held by the Senate Judiciary B committee on Friday, Oct. 5, 2018 on Mississippi’s lifetime voting ban for people with felony convictions

Three other witnesses — Roy Harness, Herman Parker and Wayne Kuhn — each spoke to having completed prison and probation sentences and having lived productive lives in the decades thereafter, only to be relegated to a kind of second-class citizenship. Their voices, as SPLC managing attorney Jody Owens noted, depicted the legacy of the ban across the lives of black and white Mississippians alike.

Robert Luckett, a historian and director of the Margaret Walker Center at Jackson State University, connected the ban to the state’s 1890 constitutional convention, which “undermined black power through disenfranchisement,” he said.

Accompanying measures like poll taxes, residency requirements and literacy exams, the set of crimes which disqualified people to vote — including perjury, forgery, arson and burglary — were established at that point because those crime were seen as “specifically black crimes,” Luckett added.

But that same constitution also gives state legislators the power to re-enfranchise people by a two-thirds vote, witnesses pointed out.

Judiciary B chairman Hob Bryan wondered as to whether such a move may be overturned in a later legislative session, and whether the constitution itself could be amended.

Opponents of the state’s voting restrictions often highlight the extent to which even seemingly minor crimes — such as writing a bad check for as little as $100 — can lead to losing the right to vote.

A Mississippi Today analysis earlier this year found that between 1994 and 2017, over 56,000 Mississippians lost the right to vote due to felony convictions. Sixty-one percent of those banned from voting are African-American, though African Americans make up only 36 percent of the state’s voting-age population.

Bryan said the committee found the issue “clearly worth pursuing,” asking witnesses to provide further information on both the legal feasibility of the state legislature restoring voting rights, and statistics on how the majority of other states handle the voting rights of people with criminal convictions.

Last legislative session, a bill to form a study committee on voter disenfranchisement passed the state House but died in the Senate.