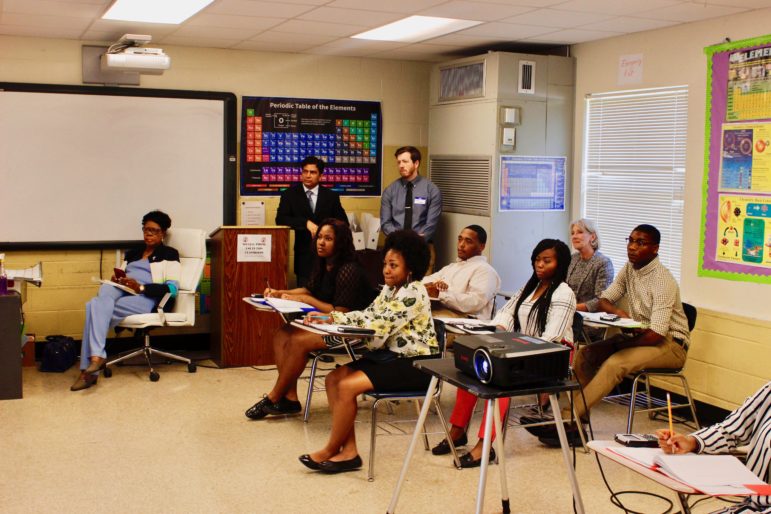 “Do you know why Ms. Devos is coming? I researched her and saw she wasn’t an advocate for public schools, so I was wondering what’s her interest in coming to a public school?”

“Would she ever find herself funding public schools?”

“Did she want to come down here?

“If she ever could find herself funding a public school, could we know about it? Or be helped? Because we really don’t know what we’re in this for.” 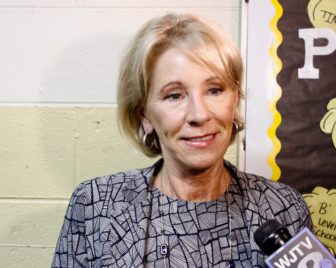 U.S. Secretary of Education Betsy DeVos answers questions from the press after her visit to Holmes County Central High School.

But the U.S. Secretary of Education wasn’t in Lexington on Thursday to answer any of those questions. She was there as part of her “Re-Think School” tour, observing the Global Teaching Project – a program designed to bring advanced placement (AP) classes to schools in highly rural areas.

The program, also available in other rural schools in Mississippi, has the potential to expose students to rigorous academic curriculums in districts where obstacles to such opportunities are all too familiar.

During the 2017-2018 school year, Holmes County School District had the highest percent of uncertified teachers in the state. Data from the Mississippi Department of Education shows that during that year, 34 percent of the teachers were not properly certified. That same year, the high school didn’t offer any AP classes.

It also received an F on the state department of education’s accountability report that year, and in 2018 unofficially received an F, meaning the district could potentially face state take over.

The median household income in the area is around $20,000, and the county is situated in rural Mississippi, where nearly 60 percent of people don’t have access to high speed broadband.

“The specific need we are looking to address is for students in rural schools particularly, most of all in rural schools that serve low-income areas, there’s lots of smart kids. However, those students often do not have access to advanced courses,” said Matt Dolan, CEO of the Global Teaching Project.

The project launched by bringing AP physics classes to 11 schools in Mississippi through a blend of virtual tutoring, online classes, videos and in-person classroom instruction.

DeVos, who has voiced favor for online learning programs in rural areas, sat in on the AP physics class in Holmes County Thursday. Students performed physics experiments for her, then moved to a different room to demonstrate how the video conference tutoring works. 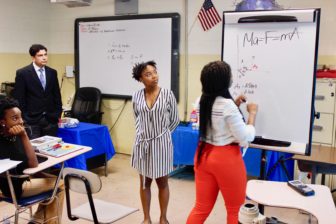 “I honestly, honestly feel like we’re being treated like a project in this,” said Kristen Ellis, one of the students in the AP physics class.

Ellis said she appreciated the program, and that she thought it would be beneficial to bring to other schools and in other subjects.

She and other students were frustrated with having to perform for the visit though, noting that they couldn’t get tutoring in the library last week because it was being worked on for DeVos’ visit, and that the bathrooms didn’t have soap dispensers until the day before DeVos arrived.

After observing the class, DeVos joined a roundtable discussion with educators, education advocates and students. Most of them implored the need for more programs like this.

“We have work to do, and we’re leaning on you to help us do that work through this particular project,” James Henderson, superintendent of Holmes County School District said to DeVos.

“It really is convicting to see and hear from especially the students … and know that among you have so many talents that need the opportunity to be developed,” DeVos said. “We are certainly committed to continuing to work with you to provide the kind of freedom and flexibility you need to meet the needs of your students here.”

U.S. Senate candidates David Baria and Mike Espy, the Democratic frontrunners for the two seats up for grabs in November, both planned campaign events on Friday to respond to DeVos’ visit.

Baria planned to visit a school in Noxubee County that is scheduled to close after this year, saying in a release that public school underfunding “is being made worse by the policies of Secretary DeVos in slashing federal funding.

Espy hosted a roundtable at his campaign headquarters in Jackson, saying in a release that “Betsy DeVos glossed over major problems in her visit to the Magnolia State.”

When asked about what her department’s role in helping solve systemic issues such as teacher shortages, lack of access and achievement gaps, DeVos said: “Continuing to encourage Mississippi as a state to take the opportunity it has to address things in new ways and to think creatively and outside of the box on how to address some of these intransigent issues that have been the reality.

“I think really looking at serving individual students and how to do that in ways that have maybe not been tried before and to do that with confidence that if you’re focused on doing the right things for students, solutions are going to follow.”

Adam Ganucheau contributed to this report.