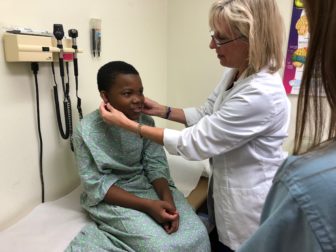 Family nurse practitioner Anne Norwood took a student’s head in her hands during a routine examination Thursday morning, and joked with the third-grader about a grey hair.

Jones was in his school’s in-house clinic for a wellness checkup, something all the students there can receive thanks to a partnership between the University of Mississippi Medical Center, School of Nursing, and the Jackson Public School District.

The 425 students who attend Johnson Elementary have access to in-house medical care. UMMC runs clinics inside Johnson and Galloway elementary schools in Jackson, as well as four schools in the South Delta School District.

They are funded by the Mississippi Department of Education through the Mary Kirkpatrick Haskell-Mary Sprayberry Public School Nurse Act, which funds similar programs in districts across the state. Last year UMMC received $127,500 from MDE for clinics in the Jackson and South Delta school districts.

Some of this funding pays for a part time nurse practitioner at the Johnson and Galloway clinics, as well as a a patient care coordinator at each one. Another clinic inside Lanier High School receives funding from multiple sources.

Both district and UMMC officials say the programs help improve attendance and save parents the hassle of getting their child to a doctor. Typically when a student falls ill at school, he or she is sent home for the day and the parent must make their own arrangements to see a doctor. Instead, all students at Johnson can walk to the clinic inside the building and receive medical care. If they need medication, the nurses can call in a prescription online and parents can go to their pharmacy to pick it up.

“Our goal is to keep (students) in school and keep their parents at work,” Norwood said.

On an average day the clinic sees about 10 to 15 patients whose illnesses may range from strep throat and the common cold, to more serious asthma attacks and other issues, Norwood said. If a child’s injury or illness warrants more serious medical care, the clinic refers them to a UMMC hospital or specialist or other health care provider of the parent’s choosing.

Johnson Elementary principal Faith Strong said in addition to boosting attendance, the nurses keep teachers up to date on which students have chronic illnesses like diabetes or asthma, and provide training on what to do if a student suffers a seizure or has a medical emergency in the classroom. 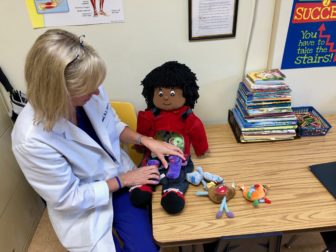 Family nurse practitioner Anne Norwood packs up “Organ Andy,” which nurses use to show students how their bodies work.

The clinic also serves as an educational experience for the elementary students. A toy doll named “Organ Andy” filled with plush organs rests on a kid table, where nurses can sit with children and pull out toy body parts to demonstrate what parts of students’ bodies aren’t feeling well.

The clinic looks much like a regular doctor’s office, with two examination rooms covered in informational posters about the body and walls filled with informational pamphlets. Norwood keeps a box in her office dubbed “the ear collection” filled with tubes containing the curious things she and her staff have found inside students’ ears like earrings, crumpled bits of tinfoil, pieces of pencil lead and even the occasional cockroach.

While the main goal of the clinic is to provide health care for the students, it also provides an instructional opportunity for UMMC students. Norwood, who is also a professor of nursing at UMMC, guided second-year medical students Tori Wilson and Haley Hobart Thursday on how to perform the well-child check – a general check-up – on Johnson. The women took turns checking his ears and examining his eyes with an otoscope while also practicing the art of doctor’s office small talk.

Norwood is no stranger to that, joking with Johnson about what he had for breakfast —a brown sugar pop tart — and what he wants to be when he grows up (a professional football player). 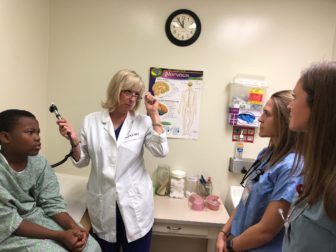 Coming to the clinic and interacting with the young patients allow medical students to translate what they’ve learned on powerpoint presentations into real life, Wilson said.

“This is where we get to work and learn while treatment is going on, and also get to see what we’re learning in the classroom and how it’s applying to the clinic as far as prescriptions, patient interactions, physical assessments and things like that,” Wilson said.

Correction: This story reflects corrections. A previous version misidentified Principal Faith Strong as Faith Ford. Also, the instrument being used to examine Jashon Jones’ eyes is an otoscope not, as our previous version stated, an orthoscope.