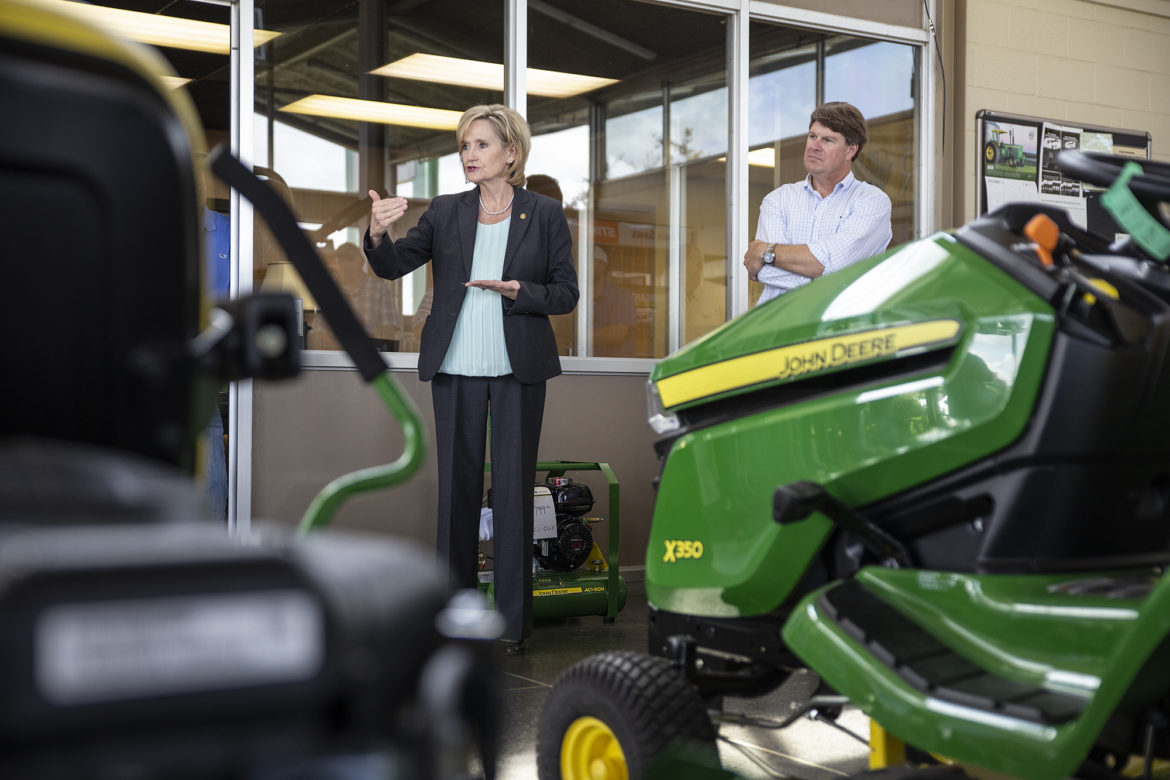 GREENWOOD — The 30 or so farmers listening to U.S. Sen. Cindy Hyde-Smith speak at a local farm equipment store nodded and smiled as she ticked through her talking points, including having confidence in President Trump’s trade policy.

When she wrapped up her speech, delivered the afternoon of September 7, their applause seemed genuine. And as she made her way around the room afterwards, Hyde-Smith was greeted with grins and familiar hugs. If there was ever a crowd likely to be receptive to the former state agriculture commissioner, this group of Delta farmers was it.

But as the senator moved away, several acknowledged that the president’s foreign trade policy, which has Hyde-Smith’s firm support, could financially devastate them. In July, the Chinese government levied $34 billion of tariffs on American products — including row crops that form the backbone of Delta agriculture — in response to a round of tariffs the Trump Administration imposed on Chinese goods.

Because China is one of the largest trading partners for many of these goods, the clock is ticking on how long crops can sit in storage before they are ruined. Chris Killebrew, a Greenwood soybean farmer, estimated that if a trade agreement isn’t worked out by February, he’s going to lose $40 an acre. With 2,500 acres, his losses would add up to $100,000.

Mississippi farmers brace for tariffs’ impact: ‘We are the ones being hit the hardest’

A similar scene played out that morning in the Jackson suburb of Ridgeland. Less than fifteen minutes after Hyde-Smith publicly accepted the endorsement of the National Association of Home Builders —  and the organization’s donation of $5,000 — half a dozen of those supporters grilled her on tariffs.

In this instance, the problem was a 20 percent tariff on Canadian softwood lumber, part of an ongoing trade dispute between the two countries. The increased cost of the lumber, used to build new homes, was adding between $8,000 and $10,000 to the price of building a new home — but nothing to the new home’s value. As a result, said Billy Ray, who owns National Concrete Products, the extra $10,000 came right out of builders products.

Dale Nelson, a contractor, agreed. “We don’t have this money in these houses to spend on anything extra. Problem is, (the cost) goes up faster than we can build them. It’s a risk. We can’t afford to build if we don’t get some relief,” Nelson said.

But this concern over personal finances has not translated into concern for Hyde-Smith’s candidacy — or for President Trump, whose policies she has supported unwaveringly since Gov. Phil Bryant appointed her to the Senate in March.

In fact, rather than shy away from the tariff controversy or distance herself from responsibility, Hyde-Smith has presented the controversial tariffs as a significant spoke in President Trump’s trade wheel — and herself as one of its most consistent supporters. This is a strategy she hope will carry to victory in November when she defends her seat in an officially nonpartisan special election against fellow Trump acolyte state Sen. Chris McDaniel, R-Ellisville, former Democratic Congressman Mike Espy and Gautier Democrat Tobey Bartee. 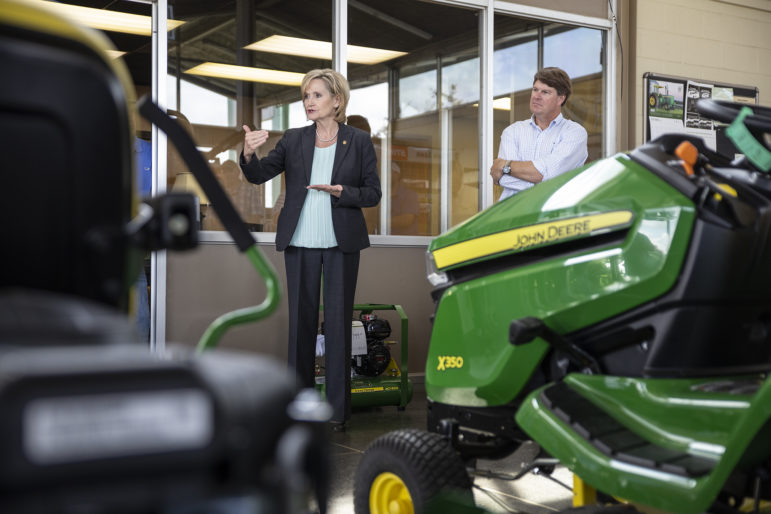 Hyde-Smith told home builders she had recently been invited to the White House as part of a seven-member advisory team on trade. She said she has the president’s ear and full faith that resolving the trade issues is a priority for him. She said the trade battle was a long game that would ultimately result in a much better deal for American business.

“The president told me, he said, ‘Cindy, we’re in for turbulence,'” Hyde-Smith said.

“But when we get to the other side of this, people are going to make a living on a level playing field.”

Hyde-Smith’s strategy of embracing not just the president but also his policies, seems to have worked for her. Well over a dozen builders and farmers spoke to Mississippi Today for this story. Every one of them said they expected the tariffs to hurt them financially. And every one of them enthusiastically supported Hyde-Smith’s candidacy.

“I don’t question it because I think there’s a lot more involved than we may know,” said Jeff Salmons of Houseworks LLC. “And we may have to ride, just like Cindy Hyde said. We’re going to ride this little storm out for the betterment, for the end result. I don’t think you can pick and choose and say, ‘Let’s leave the home builders alone.'”

“It’s devastating for us,” Salmon said. “It’s a gamble. But we can’t stop building or we don’t make a living at all.”

The same is true for the farmers. There are loan payments that will come due in the new year and interest payments to maintain and a new crop to prepare. Most farmers will try to store the grain that’s harvested this fall in the hopes of a trade resolution. And weighing the cost of the extra storage needed to save it against losing it altogether. 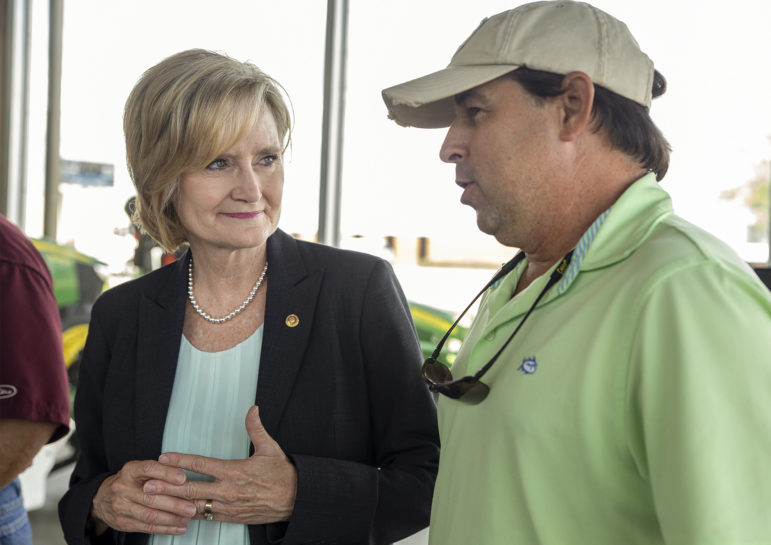 “It’s a balancing act,” said Michael Aguzzi, a Cleveland farmer. “It’s forcing us to make decisions on bean storage and if we’re going to ride this roller coaster out.”

So, too, is support for Hyde-Smith and President Trump. It’s a balancing act between those real and immediate issues and less concrete ones. Several mentioned support for the president’s other economic policies, such as tax cuts, as well as his hard line on immigration, all of which Hyde-Smith supports.

“Basically she’s a Trump supporter, and if Phil Bryant likes her, I like her,” said Wade Quinn.

And farmers who worked with her during her tenure as Agriculture Commissioner cited her strong pro-agriculture history and influence on other federal policies like the upcoming Farm Bill.

Killebrew, the farmer from Greenwood, agreed, though with less confidence.

“I think the best I can say is that I hope,” Killebrew said. “I’m fully behind them, until we can’t survive anymore.”

Killebrew estimates that won’t be a problem until January at the earliest, but more likely February — three months after the midterm elections.

Editor’s note: An earlier version of this story and several others on our site misidentified U.S. Senate candidate Tobey Bartee as a Gautier city councilman. According to his campaign website, he was most recently an intelligence analyst for the U.S. Department of Homeland Security. Each story in which Bartee is misidentified has been corrected. We regret the errors.

Trump’s tariffs could ‘devastate’ them, but farmers and contractors still back Hyde-Smith