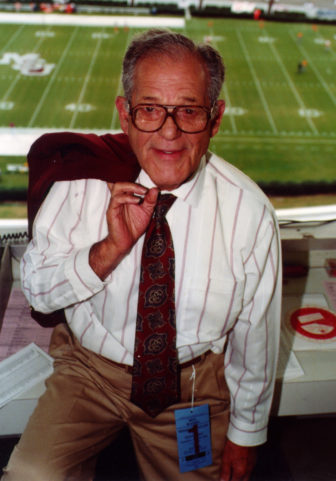 Jack Cristil: There’ll never be another one like him.

So, I thought I had heard every story that exists about the late and legendary Mississippi State broadcaster Jack Cristil. Then I heard another beauty from long-time Mississippi journalist and friend Sid Salter, Cristil’s biographer, Wednesday.

During the book tour following publication of Salter’s fine biography, Cristil was standing just under a “No Smoking” sign outside the store. This will surprise nobody who knew Cristil: Jack was smoking.

An elderly woman, dressed in maroon and white, approached Cristil and told him she was a big fan. Jack smiled and thanked her.

“But you know Mr. Cristil, you shouldn’t be smoking cigarettes here,” she said.

“Yes Ma’am, I know, it’s a bad habit, and I’ve been doing it for a long, long time,” Cristil answered. “I just haven’t been able to quit.”

“Well, you really shouldn’t be doing it here,” the woman said. “You know there are a lot of children here and this sets a very, very bad example.”

“I know, Ma’am,” Cristil answered politely. “Like I say, I know it’s a terrible habit. Like I say, I’ve tried to quit but it never worked. It’s probably too late for me to do it now.”

“You really should quit,” the woman said. “If for no other reason you should quit because of your health. Just think how much longer you would live.”

Cristil took a huge drag and exhaled like a human chimney.

The woman nodded, probably thinking she was about to hear they all smoked cigarettes.

Jack said: “What we all had in common is that all of us, at a very young age, learned to mind our own damned business.”

Salter told a lot of Cristil stories during his hour-long talk, hosted by the Mississippi Department of Archives and History (MDAH) at the Two Mississippi Museums. (Each Wednesday at noon, MDAH sponsors a “History is Lunch” progam. Topics vary, but the cost never does. It’s free every Wednesday and the best bargain in Mississippi.)

Listeners, many wearing State colors, seemed to hang on every word of every story. Salter told my favorite Cristil story, which involved a Mississippi State football game at Alabama back in the early ’60s. Bob Hope, who was doing a show that night, was at the game, which was typical of Alabama-Mississippi State games during that era. Alabama led 35-0 at halftime.

The Alabama sports publicists knocked on the door of the visitors’ broadcast booth and announced:

“Jack, Bob Hope is available if you want him.” To which Cristil answered, “Fellow, I could sure use some hope right about now.”

Salter also told the one about when Ole Miss was pummeling the Bulldogs at Oxford in Sylvester Croom’s last game as head coach. It came time for Cristil to announce the Sonic Drive of the Game, a weekly promotion.

Said Cristil, “And the Sonic Drive of the Game will be my drive home to Tupelo.”

But Cristil was so much more than just one-liners. As I wrote on the occasion of his retirement: 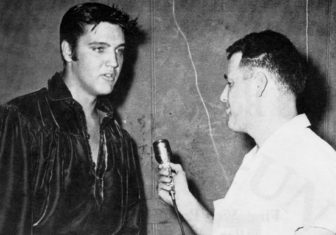 Cristil once interviewed Elvis Presley. Tupelo was Elvis’s birthplace. It was Cristil’s hometown.

“Doesn’t matter which university you pulled for, you listened to Cristil. You listened because he put you there, in the stadium. He described the weather and the setting. Told you which team was going which way. He gave you the uniform colors and always the context of the game that was being played. His often raspy baritone voice was so distinct, you could almost taste the cigarettes you knew he was smoking.”

Salter’s biography and subsequent revised edition since Cristil’s death in 2014 have been by all measures a great success story and fitting tribute to the most beloved sports broadcaster in Mississippi history (and, yes, that includes Dizzy Dean).

“What meant so much to me is that it was that the book tour was like one last hurrah for Jack,” Salter said. “I’ve never seen such an outpouring of love for anybody.”

The first printing sold out nearly 12,000 copies. The revised edition, still available at some bookstores, continues to sell.

You should know that when first approached, Cristil didn’t want to do the book, but then learned that plans were for the proceeds to go to an endowed scholarship in his name for Mississippi State communications students. Specifically, the scholarship is for young folks who want to become sports broadcasters.

Thus far, the two books have earned about $200,000 for the endowed Jacob Sanford “Jack” Cristil Scholarship. There’ll never be another Jack Cristil, but the scholarship is there to help those who want to strive in that worthy direction.

If you knew Jack Cristil, you know he would love that.

Jack Cristil’s biography: a gift that keeps on giving