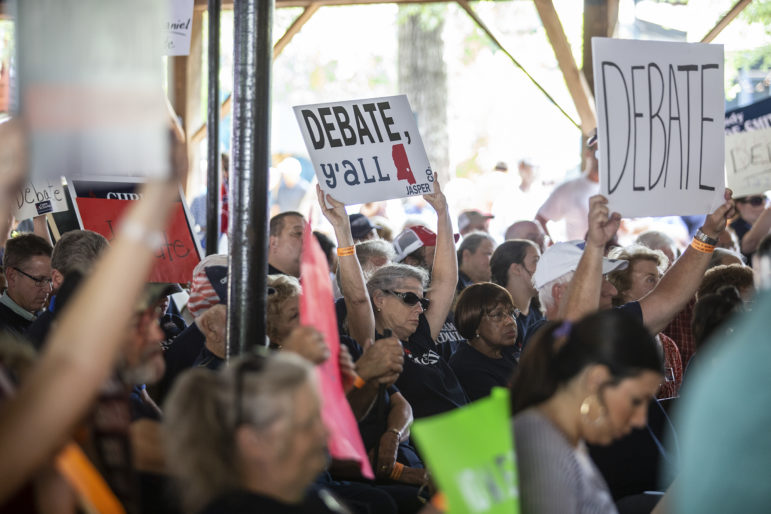 Audience members hold signs as they listen to speeches during the Neshoba County Fair in Philadelphia, Miss. Thursday, August 2, 2018.

Mississippi is in the rare situation of having both its U.S. Senate seats in play this year, so all eyes were on the candidates at the Neshoba County Fair last week.

Mississippi Today’s reporters researched and provided context for several of the statements about health care, social services, jobs and the economy. 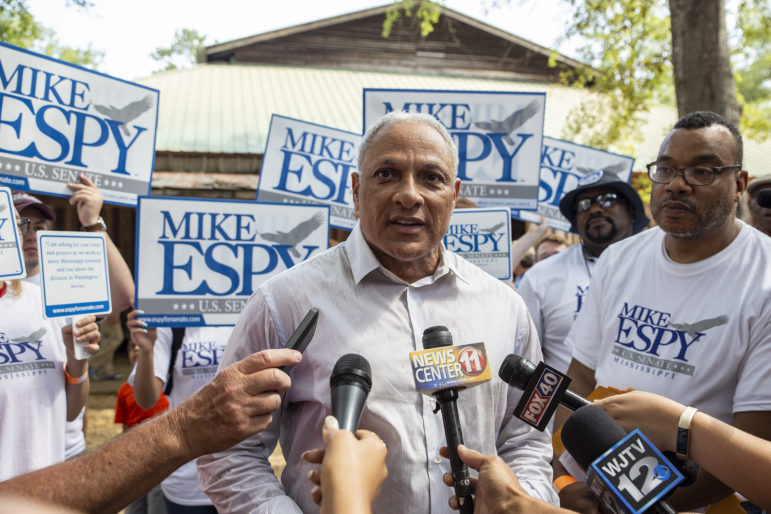 “When I walked into the (U.S. Department of Agriculture) in 1993 – it was too large. They had 124,000 employees. It had not been reformed or downsized since Abraham Lincoln created it in 1862 … I stepped in and I said… look we have too many employees in this building. And so we offered a modest incentive package as long as they took it within 30 days. And you know what happened? Within 30 days, 7,500 employees left the employment of the USDA. We reduced the payroll … and we did it without any lawsuits. And that’s thinking outside the box.”

In December 1994, the U.S. Department of Agriculture, under Espy’s leadership, announced plans to close 1,274 field offices across the country. The move was projected to save $3.6 billion over five years and eliminate 11,000 jobs. Espy said in a release at the time that the downsizing would also save farmers 2.5 million hours each year in reduced paperwork requirements. “Government just got smaller and services just got better,” Espy said in a statement reported by news wire service UPI in 1994.

Espy resigned in late 1994 amid allegations of ethical misconduct. Indicted on charges of receiving improper gifts in 1997, Espy was acquitted of all criminal charges the next year.

As a freshman (congressman) in 1987, I stepped up and wrote an infrastructure and job training bill, go look it up. It’s called the Lower Mississippi Delta Development Act. And Ronald Reagan signed that act that I wrote into codified law. This helped your roads and bridges and … the ribbons of that bill are still enforced today.

Fact check: The Lower Mississippi Delta Development Act, sponsored by Espy in his first term, was signed into law by President Reagan in 1988 to significant national fanfare. The project, modeled on earlier national development efforts like the Tennessee Valley Authority and the Appalachian Regional Development Act, was intended to examine as a whole the problems of the seven-state region along the lower Mississippi River, long one of the most impoverished parts of the country. Focus areas included job creation, business development programs and infrastructure needs.

Despite its bipartisan support — the bill was co-sponsored by 10 Republican representatives — the bill failed to find a consistent source of federal funds throughout the 1990s. In 2000, then-President Bill Clinton, signed a bill creating the Delta Regional Authority, a successor to the Lower Mississippi Delta Development Act, which Clinton had been a member of as governor of Arkansas. Since then, the authority has distributed $163 million to the region and created or retained 26,000 jobs, according to the Arkansas Democrat-Gazette.

“I’ve been speaking about tariffs on agriculture trade. Agriculture in Mississippi is a $7.6 billion industry that brings in about 1.1 of every three jobs in our state. Soybean farmers bring in about $1 billion a year in soybean production. I believe that our farmers are productive. Our farmers are very competitive. Our farmers want trade. They don’t want aid. But we’ve seen the horrible impact of retaliatory tariffs on our soybean farmers based on the imposition of a trade policy that our farmers did not create and they do not want. And our soybean prices — if you look at the tables they’re now at a 10 year low. Now that’s just food off the table for our Mississippi farmers and consumers.”

Fact check: Espy’s numbers about the financial impact of agriculture in general, and soybeans specifically, are accurate based on information from the Mississippi Farm Bureau and other sources. Soybean prices, impacted by the Chinese tariffs imposed as retaliation to American tariffs, are also at a 10 year low, and many Mississippi farmers are bracing themselves for the economic effect. “We (Mississippi farmers) are the ones being hit the hardest. We need to resolve this issue,” North Mississippi soybean farmer Jerry Slocum told Mississippi Today last month. 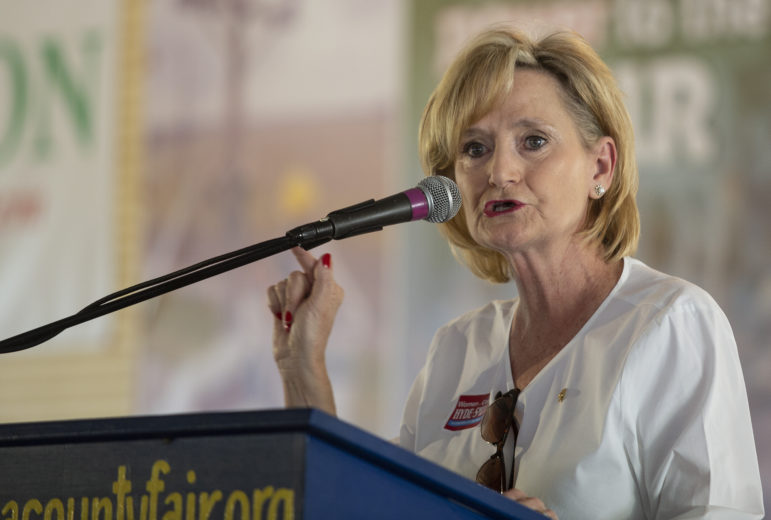 “We got that Farm Bill out of committee. We got it out of the Senate floor in record time.”

Leaders from both the Senate and the House will attempt to reconcile differences between their own bills later this summer. The most contentious difference is that the House version, which received no Democratic votes, would impose strict work requirements on people seeking food stamps. The Senate version, which needed Democratic votes to pass, includes no major changes to food stamps requirements.

Hyde-Smith: “I have been a conservative my entire life. If you want someone with a proven track record of supporting conservative legislation, defending those tax cuts and all of the things we just mentioned, I just want to be the candidate you support.”

Fact check: For her first three terms in public office as state senator, Hyde-Smith was a Democrat. As a Democratic legislator, she supported conservative issues, authoring a bill to ban most abortions after 12 weeks. After the abortion restriction bill passed and was signed by Gov. Haley Barbour, it was rejected by the federal courts.

She switched to the Republican Party in 2010, less than a year before her first statewide run for commissioner of agriculture.

Voting records indicate that Hyde-Smith voted in the 2008 Democratic presidential primary that featured frontrunners Barack Obama and Hillary Clinton. Supporters of arch-conservative Chris McDaniel, who’s running against Hyde-Smith in November, have raised this point for weeks. 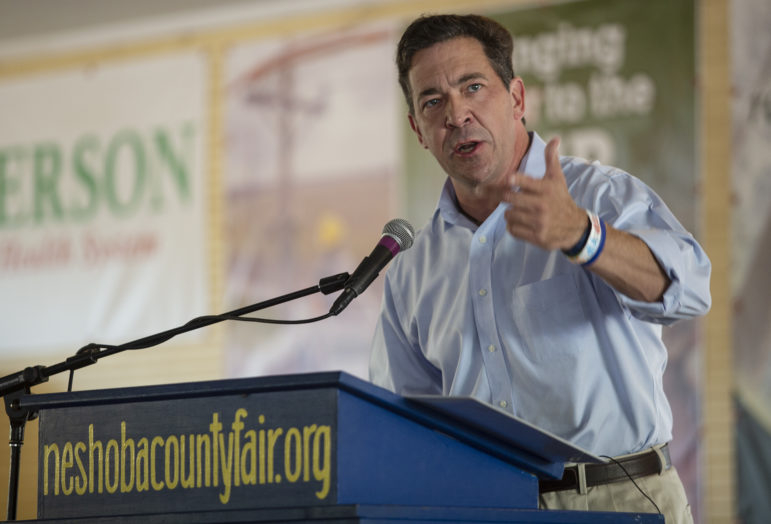 “My hero, Ronald Reagan, stood at this podium and talked to you…”

Fact check: As McDaniel said, Reagan did speak at the Neshoba County Fair in 1980 when running for president. Reagan spoke at the larger grandstand, not under the Founders Square Pavilion, where the political speakings are normally held.

“Mr. Espy, you claim to be moderate, but you take money from George Soros. You claim to be sensible, but you campaign with Cory Booker. You claim you want to work together but your entire party is predicated on class division and racial strife. You claim you want to reach across party lines, but you call our president Hitler. They want to put you in jail for using plastic drinking straws. And lastly you tell us you care about Mississippi and care about our history, but you want to change our state flag and remove our monuments from the courthouse square. I tell you right now that dog won’t hunt.”

However, there is no record of Espy calling the president Hitler or advocating for people to be punished for using drinking straws. Espy has endorsed changing the state flag, which includes the controversial Confederate battle emblem as part of its design, but he has taken no position on removing monuments. 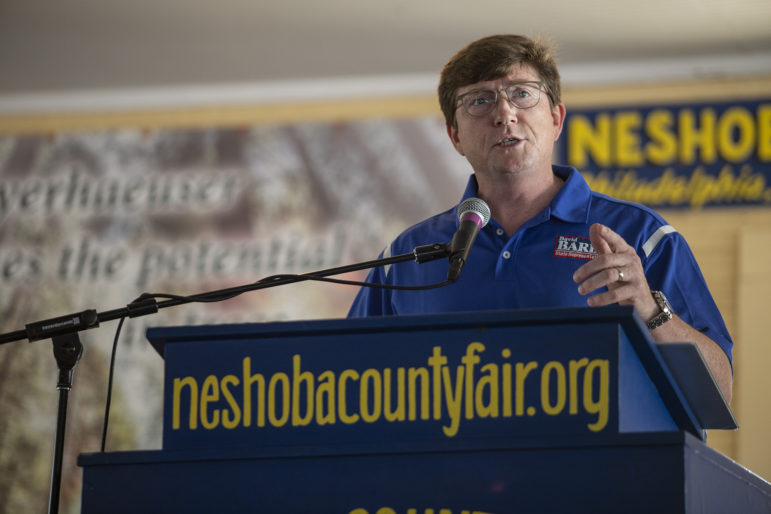 “When I was a boy, a kid could graduate from high school and …get a job at the International Paper Company or some factory to support his family. You know as well as I do that that’s ancient history. Those jobs are gone folks, and the people who are promising you that they’re going to bring those jobs back, well they’ve been promising that for an awful long time.”

Fact check: Republican leadership would beg to differ on this. In his own speech, Gov. Phil Bryant bragged  that Mississippi has the lowest unemployment rate in history, at 4.7 percent. His office frequently announces when companies are expanding in the state or providing more jobs. In July alone, the governor’s office stated Pearl River Foods would add 450 jobs to its poultry processing plant in Carthage, Franklin Corporation would add 60 jobs over the next four years in Houston, and Vertex Aerospace would add 70 jobs at its headquarters in Madison.

A 2017 legislative economic briefing from state economist Darrin Webb states the amount of manufacturing jobs in Mississippi has trended downward since 1990, but of the 7,358 jobs added in 2016, 1,100 were in manufacturing. 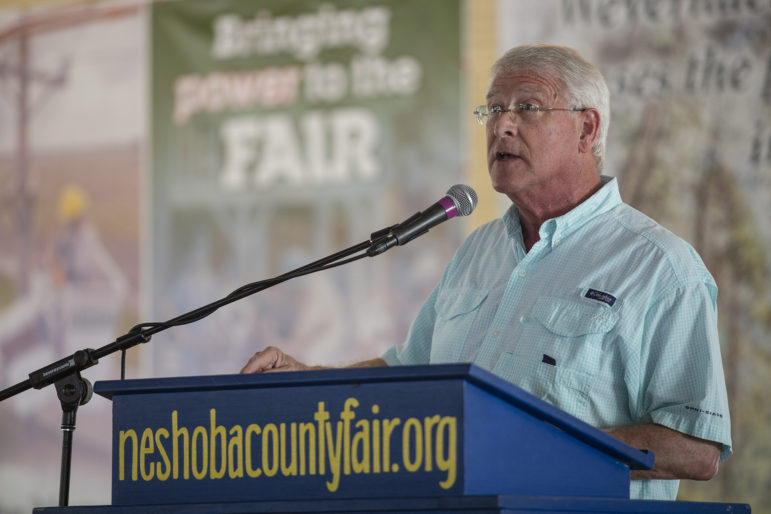 Fact check: The nation’s unemployment rate has been hovering near record lows. The July rate of 3.9 percent is the lowest in 18 years. And, as is usually the case except during major economic downturns such as the Great Recession in 2008, the number of people employed almost always increases.

According to FactCheck.org, the unemployment rates among minority populations began to decline during the Obama administration and has continued under the Trump presidency. The rate of the drop was higher during some years pre-Trump.