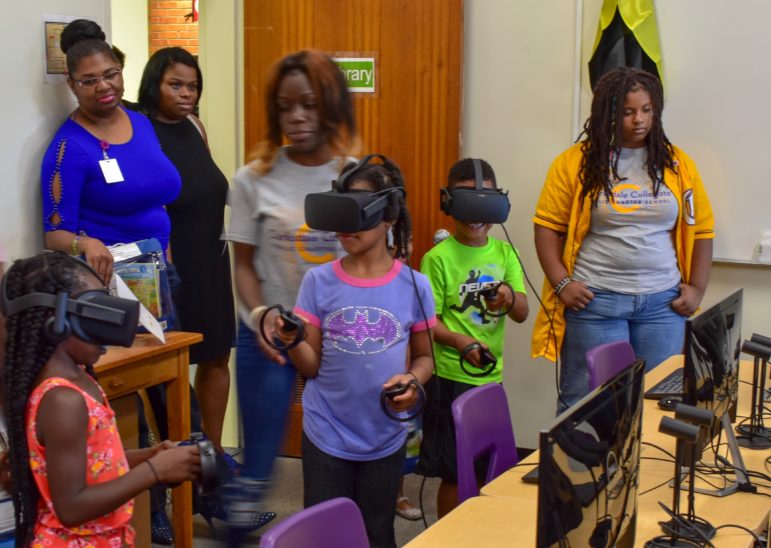 Students get a chance to experience virtual reality in the library during the first open house for Clarksdale Collegiate Public Charter School opening this week.

CLARKSDALE – When entering through the main door, parents and their children crowd a small registration table, receiving informational pamphlets and meal tickets. Others tour the facility, scanning the beige walls as they walked past the college and university pennants lining the main hallway before greeting teachers in their vibrant classrooms.

Clarksdale Collegiate Public Charter School, the 1st rural charter in #Mississippi, opens its doors for students next Wednesday, but is having its first open house now. pic.twitter.com/Qumr0bHTNf

More than a dozen more parents cluster into the superhero themed library to watch their children use virtual reality lab equipment. In the cafeteria, families pose for portraits while others grab a table to eat dinner — a serving of chicken, cole slaw, hush puppies and french fries.

The open house is for parents and guardians to help ensure their children are prepped and ready for their first day at rural Mississippi’s first charter school.

Clarksdale Collegiate Public Charter School, which prides itself on its college preparatory curriculum, illustrates that focus with signs and posters around the school with messages like, “I am college bound,” and, “Brave scholars getting ready for college.”

After receiving approval from the Mississippi Charter School Authorizer Board to operate outside of the Jackson area last year, Clarksdale Collegiate is set to open their doors for students on July 25. 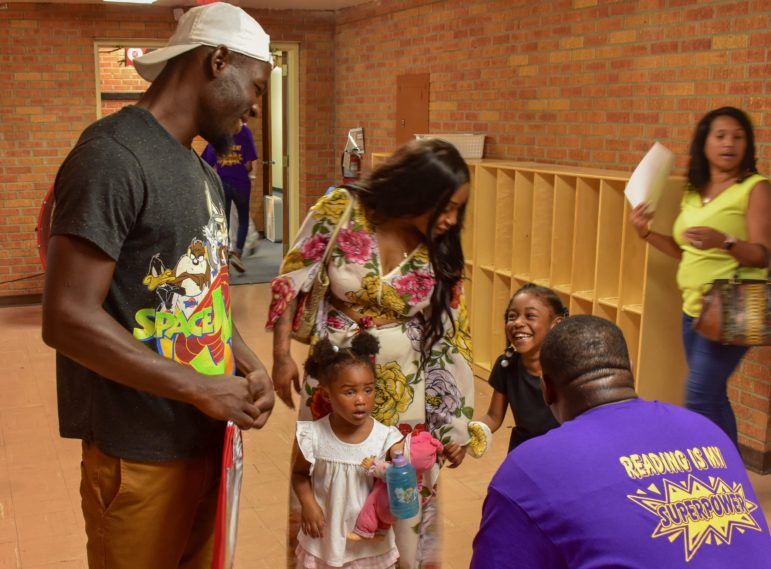 Starting out with 50 students each in grades kindergarten through second, long term plans call for a school that goes up to eighth grade.

But before getting to this point, school leaders had to tackle a few major hurdles including winning over community members and getting buy-in from parents, finding a home for the school, figuring out transportation routes and buying buses, and hiring staff and administrators, said Amanda Johnson, the executive director of Clarksdale Collegiate.

Getting parents to sign on was also a challenge, she said, especially without staff or teachers on board. Because the school is new and parents had no clue what to expect, uncertainty of whether they would get 150 kids made Johnson nervous.

“People wanted to know who the teachers are gonna be?” she said. “At one point, I was saying, ‘Trust me, we’ll have a great team.'”

And in early February 2018, Johnson announced that St. Paul’s United Methodist Church would be the new home for the school. At the time, Johnson noted that they received 69 applications for the proposed 150 slots for students and their fundraising efforts were “off to a really good start,” raising $725,000 of their two-year goal of $1.5 million.

Although parents bought in to Johnson’s vision for the school, getting teachers were even more of a challenge, said Johnson.

“Are you really gonna do what you say you are gonna do? Are you gonna stay open?,” prospective educators asked, Johnson said. “I think there were a lot of questions that potential teachers had. And it was harder, too, with a smaller school. There’s limited positions. We’re only gonna have 150 kids.” 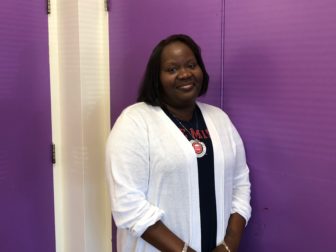 But for teachers like Latasha Capers, a New York native who came to Mississippi to work for Teach for America, hearing Johnson’s passion for education was enough to reel her in.

“I mean, it’s exciting. It’s exciting to see what could be,” said Capers, who has taught in the Quitman and West Tallahatchie school districts over the past three years.

“Knowing Amanda and speaking with her and hearing that vision of what she wanted — what she wanted for her students and for the school — to me, it was exciting and I felt like I wanted to be a part of that. I have those same feelings and passions about education and I wanted to be in a place where I get to nurture that.”

Earlier on, residents voiced concerns about how students would get to and from school. Johnson said that they’ve purchased three buses and hired two bus drivers.

“We can’t say we’re available to all kids and then not provide transportation but that is a priority for us,” said Johnson. “Providing transportation is mission critical.”

By now, most of these tasks have been checked off of the list, and Johnson believes they’re going to be able to start off really strong, she said.

Currently, Johnson has a full-staff that includes eight teachers. Kindergarten classes have reached capacity, and there are 14 students on a waiting list. However, she’s unsure the availability of seats left for first and second graders because some parents have not completed the registration process.

Conversations began about the viability of charter schools in the area have been taking place since last year, including on two panel discussions Mississippi Today hosted and one public hearing, when critics voiced a number of concerns about the charter school. One of biggest reasons was that local, state, and federal dollars would leave the traditional public schools to support the students attending the charter school.

Capers said no matter where students come from, Clarksdale Collegiate will benefit the entire community.

“These are our kids right? They’re from here. They’re from this community. I think to give them something — I won’t say better because better is not the word — but give them a different opportunity, expose them so something new. Why not?,” said Capers, who will teach kindergarten at Clarksdale Collegiate.

Johnson believes the question of whether charter schools help or hurt communities will persist.

“I think the opposition voice will always be the loudest in the room but my families are excited. They understand and have bought into what we are trying to accomplish … and I think that part of the conversation is a little more elevated which is nice,” she said.

“That’s not just me screaming it’s a good idea. … I have scholars who are enrolled in our school who have uniforms and are buying school supplies for day one and those families and those people who are excited about us being here.”

She said her goal is to become a model for high quality programming in education.

“I think the Delta is not always talked about in a favorable way and so we can’t wait to show what our kids can do,” said Johnson. “We just want our scholars to show what’s possible when you’re able to support kids and a great education.”