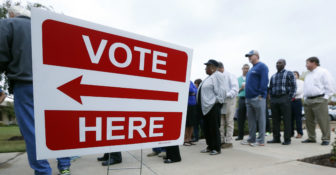 Voters wait in line to cast their ballots in Ridgeland on Nov. 8, 2016.

Candidates for the third congressional race filed first quarter finance reports this week, giving a first broad glimpse at who might dominate air waves between now and the June 5 party primaries.

U.S. Rep. Gregg Harper, a Republican who has served in the seat since 2009, announced in January that he would not seek reelection this year, spurring a flood of bids for the seat.

Eight candidates – six Republicans and two Democrats – qualified for the seat and have been campaigning since. The eight candidates will face off in their respective party primaries on June 5, and the two party nominees will square off in a Nov. 6 general election.

All but two candidates filed first quarter finance reports with the Federal Election Commission, which covers contributions and expenditures from Jan. 1 through March 31.

• Michael Aycox, a Democrat from Newton and corrections officer with the Mississippi Department of Corrections: Raised $100, spent $1,156, has -1,356 cash on hand.

• Michael Evans, a Democrat from Philadelphia and poultry farmer has no statement of candidacy or financial data on the Federal Election Commission’s online database.

• Katherine Tate, a Republican from Jackson who was a public school teacher has no record of financial data on the Federal Election Commission’s online database.

• Bennie Thompson, the Democratic incumbent from Bolton who is running unopposed: Has $1.3 million cash on hand.

How much money have candidates raised in race to replace Rep. Gregg Harper?