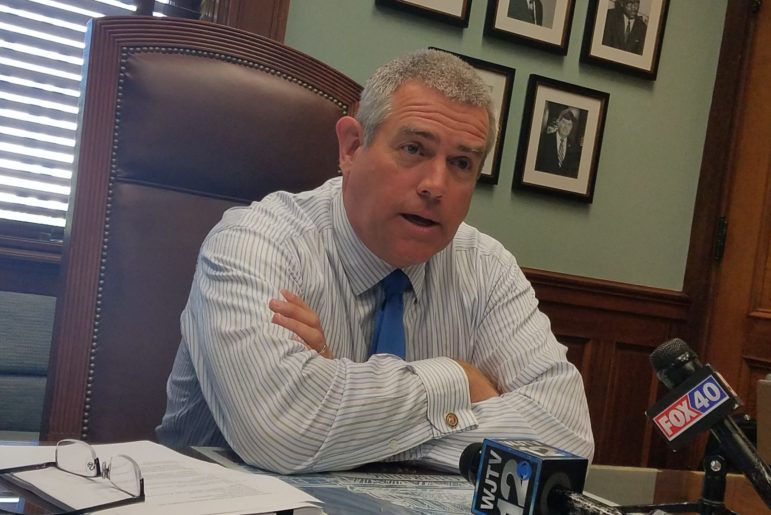 House Speaker Philip Gunn, R-Clinton, has  a new plan to pay for infrastructure repairs around the state, which he hopes can be passed during a special session of the Legislature.

Gunn told reporters Thursday morning that his proposal, which he plans to submit to Gov. Phil Bryant and Lt. Gov. Tate Reeves for consideration, is a version of a bill the House approved early in the 2018 session. That plan would have applied some tax revenues the state is currently collecting towards road and bridge repair and maintenance, including at the local level.

While that plan did not advance, lawmakers approved $50 million in bonds to address local bridges last session.

“This is our starting point. We have not rested since the session ended and have continued to work on this issue,” Gunn said at the Capitol. His overture came two days after Gov. Phil Bryant published an executive order closing more than 100 local bridges across the state deemed not to meet state and federal safety standards.

Hours after Gunn’s announcement, Reeves voiced renewed opposition to raising the gas tax and Bryant signaled he sees no point in a special session on road funding until the House and Senate leaders both agree on a plan.

In addition, the plan calls for what Gunn calls a tax swap that involves phasing out the 4 percent income tax bracket over four years, which generates about $160 million in revenue, and increasing the fuel tax 2 cents each year for four years. At the end of the phase in period, the current gas tax of 18.4 cents per gallon would increase 8 cents and then be indexed to the inflation rate.

Speaking with reporters after giving remarks at the annual meeting of the Mississippi Economic Council, Bryant repeated that he would not call a special session until the House and Senate have hammered out a deal but that he is open to discussing the tax-swap idea.

“It’s something we will certainly discuss. I would want to make sure that the working people of this state have an opportunity to see some real tax reduction in their income. Again, it has to be a situation where both the House and the Senate can agree on something that would move forward. If that’s a tax swap, I’m certainly willing to sit down and talk to them about it,” Bryant said Thursday morning.

Reeves in recent years has been resistant to infrastructure proposals that relied on funds generated by a use taxes, which taxpayers pay voluntarily when making online purchases, because he believes the tax is unconstitutional. The U.S. Supreme Court recently heard arguments in a case seeking to overturn a 1992 decision finding that states can only collect sales tax from businesses with a physical presence in their state.

Through a statement, Reeves responded: “I am a Republican. I am a conservative. I am against raising gas taxes. The Senate passed a comprehensive $1 billion plan without raising anybody’s taxes to address Mississippi’s infrastructure needs, and we look forward to working with the House and Gov. Bryant to address road and bridge maintenance.”

In 2016, the Mississippi Economic Council published a study recommending that the Legislature appropriate an additional $375 million for Mississippi Department of Transportation, with $300 million going towards infrastructure improvements. MEC has offered several suggestions for funding the additional highway funds, including a gas tax increase, an extra $10 on the annual license tag fee and a general sales tax increase.

Nathan Wells, Gunn’s chief of staff, said the proposal anticipates 1 percent growth in the state’s economy, which he said should avoid the need to make cuts elsewhere in the budget to make up for the loss to the general fund from the elimination a portion of the income tax.

Gunn said he remains optimistic that Reeves will be open to his latest plan.

“There is no good policy reason that I can think of as to why this plan doesn’t work. It’s based on sound economic principles. It is not a tax increase. It is solving the problem (by) providing a continuous stream of revenue moving forward that is based on existing dollars. You look at it from every angle, and we think it’s good policy,” he said.

Read the latest on bridge closures in Mississippi.