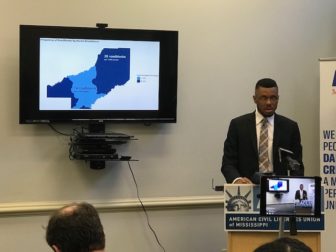 Lawrence Blackmon is a plaintiff in the lawsuit against the Madison County Sheriff’s Department.

Attorneys in a federal lawsuit against the Madison County Sheriff’s Department presented new data they say supports their case that the defendants practice discriminatory and unconstitutional policing tactics.

African Americans make up 38 percent of the county’s population.

The plaintiffs attorneys are asking the legal challenge be deemed a class-action lawsuit, a request they say is supported by those statistics.

“MCSD’s own paperwork confirms that it targets black citizens for arrest,” said Joshua Tom, legal director for the ACLU of Mississippi. “In the course of our class certification discovery, MCSD officials produced template forms that deputies use in the course of their duties, and on those forms from at least two officers appear pre-populated check boxes marking ‘black,’ ‘male,’ and ‘arrested.’ The evidence will show discriminatory and unconstitutional policing, and we are looking forward to presenting all of the facts as our case moves forward.”

Madison County Attorney Katie Snell said the sheriff’s department does not comment on pending litigation, but the defendants’ prior response in court denied any racist or discriminatory practices.

The plaintiffs, represented by the ACLU and the New York-based law firm Simpson Thacher & Bartlett LLP, accuse the sheriff’s department of running a “top-down program” of selectively targeting black communities with unconstitutional policing tactics such as “show-ID-and-search pedestrian checkpoints, roving roadblocks, ‘jump outs’ by plainclothes deputies in unmarked cars and warrantless home invasions,” a release from the ACLU stated.

At a news conference announcing the findings, plaintiff Lawrence Blackmon spoke about his experience with sheriff’s department officials. He says deputies forced his way into his Canton home without a warrant one night looking for his cousin.

“(They) made me lay face down on the floor and handcuffed me at gunpoint and proceeded to search my home for my cousin who I informed them was no longer living there at that time,” Blackmon said. “I asked them to produce a warrant and they would not.”

Blackmon said this is one of many such incidents in his community.

“(It was) another reminder of the fact that being black in Madison County oftentimes means that your constitutional rights can be disregarded by overzealous Madison County Sheriff’s Department deputies,” he said.

Attorneys representing the sheriff’s department have until May 8 to respond.