Lawmakers, lobbyists and education and community activists provided a standing room only crowd in January 2017 in the old Supreme Courtroom of the Capitol as they listen as Rebecca Sibilia, CEO of EdBuild, outlines the firm's suggestions for revamping the state formula for funding public education.

As Mississippi lawmakers weigh a sweeping rewrite of how schools are funded in the state, a national look at public school funding shows that 28 other states are already using a similar model of the formula currently under debate.

House Education Committee Chairman Richard Bennett, a supporter of the legislation pending before lawmakers, extolls the formula as good for Mississippi students.

“The formula is entirely student-based, which means that the single most important consumer of our public school system — the student — is the fundamental building block of the new formula,” Bennett wrote in a recent op-ed.

He calls the state’s current formula, the Mississippi Adequate Education Program, too complex and focused on programs instead of students. The new formula would make funding more transparent and direct the state’s dollars to students who need them most, he wrote.

Weighted student funding, or student-centered funding, establishes a base per student amount that is required to educate a general education student — one without special circumstances or needs. Weights, or additional funding, are then added to that amount depending on individual students’ characteristics.

But not all states have a perfect base amount, and opponents of Mississippi’s new plan have pointed out the current legislation does not require a periodic recalculation of the base student amount.

In Mississippi, the proposed base student cost in pending legislation is $4,800, which is less than the per pupil amount of $5,381.52 called for under the state’s current MAEP funding formula this year. However, that full amount was not appropriated this school year. In fact, the MAEP formula has been fully funded only twice since its adoption in 1997.

The new $4,800 base student cost was proposed in the January 2017 recommendations of private research firm EdBuild, which stated that the $4,800 amount “will exceed the current effective base funding by $164.”  Mississippi Department of Education officials told Mississippi Today that they are not able to calculate a per pupil amount from this year’s overall state appropriation.

But Kentucky, for example, recalculates its base student cost every two years while Arkansas lawmakers use a formula called a “matrix” that determines an adequate level of funding each year. For example, the base student cost was $6,584 per student in fiscal year 2016 and $6,646 per student in fiscal year 2017, according to the Arkansas Department of Education’s school finance manual. 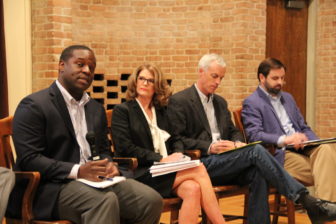 Public education advocacy group The Parents’ Campaign urges their members not to support the bill for several reasons, one of which is it “contains no objective formula for determining base student cost; does not require that funding keep pace with inflation; and makes no provision to consider a recalculation for seven years.”

The idea behind student-centered funding is that the dollars will reach the students who need it most: low income, English learners and special education students, to name a few.

But in reality, many states instead adapt their school funding formulas to the amount they can afford to spend.

“In most cases, the dollar amount per student is what the state can afford,” Mike Griffith,

Formulas look different and are funded at varying amounts across the country, and research on statewide implementation of student-centered funding is limited.

Kentucky replaced its school funding formula with a student-centered system after a court ruling found its former mechanism inequitable in 1989.

Kentucky lawmakers then adopted Support Education Excellence in Kentucky, or SEEK, which provides a base amount for students with no specific needs or services then adds on weights for English learners and low-income and special education status, in addition to gifted and talented students and career and technical education.

One of the most recent studies done on Kentucky’s funding system was done by researchers at the University of Wisconsin-Madison in 2001. The study analyzes 10 years of data from 1990 to 2000 and found that equity in funding to school districts improved over the decade.

Over that time frame, there was a “high degree of equity” among districts receiving less revenue, and high revenue districts did not gain more than average.

“There is a substantial degree of fiscal equity in Kentucky under the SEEK formula. Revenue per pupil differences are relatively small, and the link between property wealth and revenue per pupil is essentially gone,” the authors wrote. “Although Kentucky policymakers should not become complacent about the equity of the system, it appears that at this time revenue inequities are not a problem for the state.” 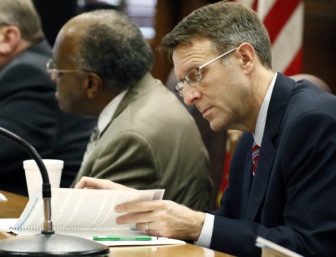 Senate Education Committee chairman Gray Tollison, R-Oxford, reads from a copy of recommendations made to lawmakers by EdBuild, a New Jersey non-profit education consulting firm, during the firm’s presentation to legislative committees in January 2017.

The study notes that the remaining questions have to do with adequacy — that is, whether schools have adequate funding to achieve their academic goals. The authors recommend lawmakers establish a “high SEEK base,” which might require adjusting the base student amount.

“The next step is to define what that adequate revenue level is. It should be established at a level that will allow school districts to provide enough money for each school in the state to deploy powerful educational strategies” to meet the state’s goals, which include having all students achieving proficiency or above on state tests.

“This will establish a system that is adequate and even more equitable — a condition attained by few, if any, school finance systems in the country at this time,” the study concluded.

California enacted the Local Control Funding Formula in 2013 as an attempt to achieve greater equity throughout the state. The new formula also coincided with the state’s passage of Proposition 30, which has generated an average of $7.5 billion in tax revenue each year, the majority of which has gone to schools.

The formula establishes a different base student cost for students depending on grade level then adds weights for students who are English learners, low-income and foster youth. The state also provides increased funding for small schools and special education, in addition to an extra amount for school districts where at least 55 percent of students are low-income or otherwise at-risk, according to EdBuild’s nationwide database.

But three years after the formula took effect, funding was distributed more equitably throughout the state.

However, the results were not perfect, and gaps in access to resources still existed. 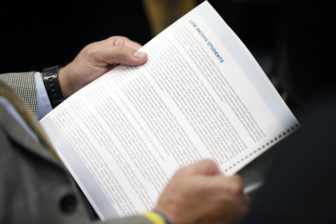 A lawmaker reads a section of recommendations laid out by EdBuild, a New Jersey non-profit education consulting firm, during a joint meeting of the House and Senate Education and Appropriations committees in January 2017.

The study found in some content areas such as music and computer science, the gap in access had actually widened.

In addition, while the formula may have changed, many of the policies and laws remain the same.

“The fact is, districts are getting more money but they are still operating under most of the same policy constraints as before,” the report found.

Examples include state laws and local policies limiting how districts can hire and compensate teachers or how many students can be in one classroom.

Hawaii is a unique example because the entire state is treated as one large school district, and communities are not required to contribute any local taxes.

Hawaii’s school funding formula was adopted in 2006. The formula is made up of a base student cost plus additional funds for: kindergartners through 2nd graders, English learners, special education, low-income, gifted, and transient students. It also provides increased funding for career and technical education programs in addition to increased funding for students living on neighboring islands.

A 2013 study by American Institutes for Research found that funding equity did improve in Hawaii, “as evidenced by statistically stronger, positive relationships between funding and student need … across all grade levels since its implementation.”

It also found that Hawaii has one of the best models of funding equity across the country and allocates “30 to 38 percent more for each socioeconomically disadvantages student than for a student with no socioeconomic disadvantage.”

While funding equity improved in Hawaii, challenges remain, such as ensuring the weights accurately represent the cost of educating a particular student and principal and superintendents’ lack of discretion over hiring and other personnel matters.

The study also spoke to a challenge present in any weighted student funding formula: “determining how discretion over specific educational services should be divided between the central office and school sites.”

A new pilot project initiated by the federal government could indicate an increasing trend toward student-centered funding mechanisms. 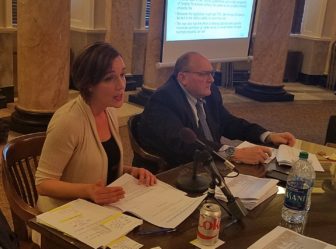 U.S. Secretary of Education Betsy DeVos recently announced a pilot program for 50 school districts across the country to create their own student-centered funding formulas and combine certain federal, state and local funds and allocate resources with more flexibility. Districts that want to qualify for the 2018-2019 school year must submit their applications by March 12.

“The flexibility will allow school districts to combine eligible Federal funds with State and local funds in order to allocate resources to schools based on the number of students and the corresponding level of need,” the press release announcing the program stated. “This type of system, often called ‘student-centered funding’ or ‘weighted student funding,’ is widely considered to be a modern, transparent and quantifiable way to allocate resources to the students most in need.”

“This is a great opportunity to put students first,” DeVos said. “Instead of relying on complex federal rules to allocate funds, local leaders can use this flexibility to match funds — local, state or federal — to the needs of students.”

Assigning a more expensive amount to individual students, and the money potentially following those students in a ‘school choice’ program, could lead to charter and private schools siphoning more money from public education, opponents say.