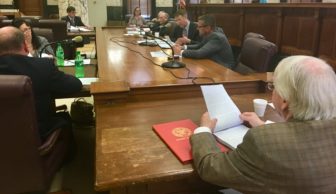 Senate leaders indicated Wednesday that they don’t plan to make substantial changes to the House’s school funding proposal as it moves forward in the legislative process.

Since House Bill 957 passed the House last month, questions have swirled about the Senate’s plans for the formula, even among senators. With an important deadline looming on Tuesday, Senate Education Committee Chairman Gray Tollison finally indicated there would be no “substantial changes” to the bill.

Tollison, R-Oxford, did say a few provisions of the bill are still being worked on.

One in particular is how school districts with drastically increasing enrollment would be funded this fiscal year and next.

Under House Bill 957, no school district would lose money from this year’s funding level over the next two years. The formula would not be implemented until fiscal year 2021.

But the same level of funding as this year would negatively impact “high growth” school districts like Madison County.

“That issue’s being ironed out,” Tollison said.

Tollison also clarified there would be no attempt to remove the 27 percent rule — the provision in the current formula that forces the state to provide funding to property rich districts that have the resources through local tax base to raise the funds locally instead.

Opponents of the rewrite spent the most time questioning Tollison and EdBuild CEO Rebecca Sibilia about the new formula at the meeting Wednesday.

Democratic Sen. David Blount of Jackson asked several times why numbers being provided by EdBuild, the school finance group that the Legislature hired to propose recommendations for a new formula, compare actual education appropriations to the new formula instead of what appropriations would be under full funding of the state’s current formula, the Mississippi Adequate Education Program (MAEP).

“An apples to apples comparison is to run the numbers” according to full funding of MAEP, Blount said.

He also noted that while estimates indicate the new formula would produce about $108 million more for schools than the amount appropriated in the current fiscal year, that number is dependent on enrollment numbers staying the same in each district and would not be fully realized until fiscal year 2026.

Sibilia noted in the meeting that under her estimates, 107 of the 142 school districts would receive more money in fiscal year 2026 than they received in the current year. Of the 35 school districts that would receive less money, 30 have declining enrollment and five are subjected to a “hold harmless” provision in current law that prohibits them from receiving less than they received in 2002.

Many have pointed out that appropriations under House Bill 957 would be far less than what MAEP would produce. The public school advocacy group The Parents’ Campaign estimated the amount would be $292 million less in its first full year of implementation than what MAEP requires.

The Senate Education Committee is expected to meet Monday or Tuesday to discuss and vote on the bill ahead of Tuesday night’s deadline for the bill to be reported out of the committee.