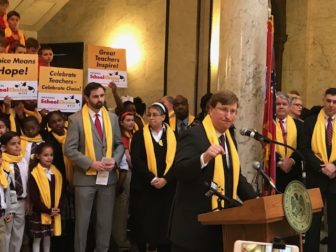 Lt. Gov. Tate Reeves at the School Choice Rally at the Capitol

Controversial legislation that would have drastically expanded the state’s voucher-like Education Savings Account program died ahead of Thursday’s deadline.

Lt. Gov. Tate Reeves, an outspoken proponent of expanding “school choice,” said in a press release Senate Bill 2623 died “because there is not enough support in the House at this time.”

And several Republican senators who spoke with Mississippi Today earlier in the week said they would vote against the bill, which was never brought up for debate on the Senate floor. 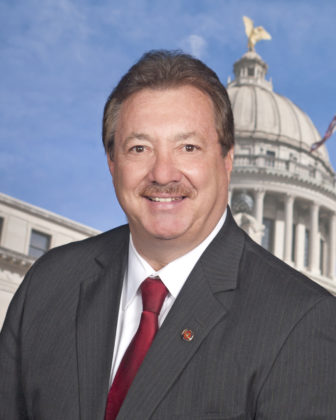 “You see those pictures right here? That voucher bill will take your picture off the wall,” Moran continued, pointing to the senators’ photos lining the halls outside the Senate chamber, implying that lawmakers who voted in favor the legislation would face political consequences in a future election. 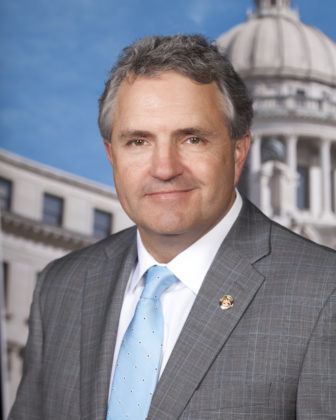 Sen. Chuck Younger, a Republican from Columbus, also expressed his doubts about the bill.

“Too many people are concerned about how it takes money from public schools,” he said.

Reeves, however, made it clear the fight for expansion of the program is not over.

“We need to continue to educate legislators, in both chambers and in both political parties, on the success Mississippi parents have seen in the current ESA program and how school choice will have long-term benefits to our state,” Reeves said.

Gunn has also spoken in support of school choice but differed sharply with Reeves’ analysis of what caused the bill to die.

“Either it’s an incredibly weak excuse for their inability to get it done, or the House of Representatives is driving this train,” Gunn said, noting he had never received any information about which way the House might vote. “I don’t know why you wouldn’t bring it up. If you’ve got the votes to pass it, that’s what we do down here.”

House Education Committee Chairman Richard Bennett did not take up a similar House bill in committee, killing it early in the process.

Under current law, students with special needs who are awarded the accounts withdraw from their public school and receive $6,500 in state funds to spend on private school tuition, tutoring, transportation and a host of other approved services. 322 families used the accounts this school year, according to the state education department.

Mississippi Today reported last week that under the current Education Scholarship Account program, some students receiving the accounts are actually enrolled in private schools where they receive services from the public school district. The duplication is made possible by a federal law that requires school districts to spend a certain amount of funds educating private school children with disabilities.

Senate Bill 2623 would have made all students who attended public schools the previous year eligible for the accounts. Children whose parents are in the military and those in the foster care system or adopted from that system would not need to meet that requirement. Students with special needs and low-income students would receive priority for the accounts.

The bill would have capped participation to one-half of a percent of public school enrollment the first year, or 2,400 students, then added more students in each subsequent year.

Russ Latino, state director for Americans for Prosperity, a national organization that advocates for conservative fiscal policies, said it is “a sad day for many Mississippi children trapped in schools that don’t meet their needs or position them for lasting success.”

“Rome wasn’t built in a day. We will double down and take the message of education freedom directly to citizens,” he said.