Many of the nation’s best public universities are enrolling disproportionately few African-American and Latino students.

Flagship universities are the jewels in the crown of public higher education systems — they have sought-after faculty, preeminent research facilities, the most resources and often the highest graduation rates, for all races. They also stand as beacons of affordable excellence for the students of their states.

But when it comes to equitably serving the state’s residents, whose taxes fund these top-flight universities, many fall far short of their stated missions. Often there are big differences — defined by race — between who’s graduating from a state’s public high schools and who’s getting into its flagship universities.

For Latinos, 10 states had at least a 10-point gap. New York and Illinois were the only states that had double-digit gaps for both groups.

“It matters who’s enrolled at flagships, because they tend to go on to be leaders in their states, particularly in politics and in business,” said Andrew Nichols, director of higher education research and data analytics at The Education Trust, an advocacy group that focuses on college access. “It’s important for everyone going to these universities that they are diverse.”

It’s also important for students financially. Most flagships have larger endowments, allowing them to offer more generous scholarships and provide more robust academic and social support to students. And later on, in many states, the average earnings for graduates from flagships outpace those of graduates from most of the state’s regional public universities and colleges. 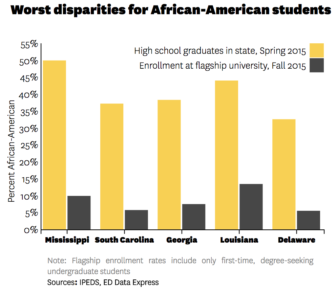 African-American students say their shrinking numbers at Ole Miss, on a campus that famously resisted integration, contribute to a more difficult learning environment.

Orion Taylor visited Ole Miss when he was a senior in high school and fell in love with the campus. He enrolled in the fall of 2013, but soon after he arrived, he began to have concerns. Groups of residents were permitted to march through campus, waving giant Confederate flags and, he said, shouting the “N” word at him and his friends. Later that year, some white students marched up and down his dorm hallway belting out the song “The South Will Rise Again.”

Other problems were subtler. He said that he felt that faculty members were more attentive to white students, and he didn’t get any of the leadership positions for which he applied. He eventually transferred to a historically black university.

“I tell myself every year, I wish I would have chosen Jackson State in the beginning,” said Taylor, 23.

Noel Wilkin, provost and executive vice chancellor for academic affairs at Ole Miss, said the university is working to increase diversity and to retain admitted students. In the fall of 2015, African-American student retention was 87.2 percent, the highest in Mississippi, he wrote in an email, attributing this to “programs that are geared toward student success, including academic support programs and scholarship opportunities.”

Although it’s easy to see Mississippi as an outlier, many other state institutions are also struggling for equity.

The University of South Carolina enrolled the lowest percentage of African-Americans in its 2015 freshman class among the 34 colleges and universities in the state system.

The University of Georgia and Louisiana State University both have enrollment gaps equal to South Carolina’s (31 points), but LSU, unlike the others, has increased African-American enrollment since 2010.

President Eli Capilouto, who arrived six years ago, was explicit about wanting the student body to be representative of the state, said UK’s vice president for institutional diversity, Sonja Feist-Price. She sees greater diversity as creating educational advantages for white as well as black students.

“We have students here who have not encountered many, or any, students who are different from them,” said Feist-Price, a UK faculty member since 1992. “We’re all far better off when we understand the ways we are alike and different.”

The largest gaps in enrollment for Latino students are, for the most part, at different institutions than those that have large gaps for African-Americans, and are concentrated in the western part of the country.

The University of California, Berkeley, has the largest gap for Latino students — only 13 percent of its 2015 freshman class was Latino, compared to 51 percent of the state’s public high school graduates.

“We definitely see it; it bothers me every day,” said Amy Jarich, Berkeley’s associate vice chancellor for admissions and enrollment. “Our goal is to serve the state, and to have conversations in our classrooms that reflect the diversity of the state.”

One issue is that elite institutions like UC Berkeley try to compete nationally — and internationally — for top students. Starting in 2009, as state budget cuts squeezed resources, out-of-state and international students who could pay full freight became attractive as a source of revenue. Now 24 percent of Berkeley’s students are from outside California.

UNM administrators say that its success in graduating Latino students is one of the university’s biggest selling points.

“Students and families see that there is a culture of support and success at UNM,” the university’s vice provost of enrollment and analytics, Terry Babbitt, wrote in an email. “Mentoring, cultural celebration, places to find support and comfort, and committed faculty and staff, many who come from similar backgrounds, make a difference.”

Babbitt also said that to reduce inequity, there must be an “institutional commitment” to serving the population in question.

“Everyone has to be on board,” said Babbitt. “An ethnic center, minority recruitment office or other siloed group won’t get the job done alone.”

This story was produced by The Hechinger Report, a nonprofit, independent news organization focused on inequality and innovation in education. Sign up for our newsletter.