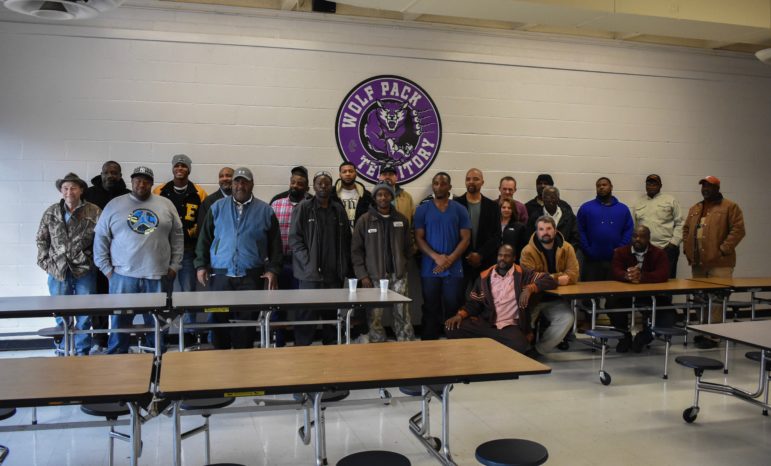 CLEVELAND – The newly consolidated middle school here is spearheading a program devoted to bringing fathers into the schools to increase support, motivation, and discuss concerns for the betterment of their children.

All Pro Dad’s Day gives fathers an opportunity to speak positively about their children and to discuss different topics of the day at the monthly event.

A host of fathers, grandfathers, brothers, uncles, and even a couple of mothers filled the cafeteria last week. Dr. Derek Bell, assistant principal of the school, said the participation has dwindled a bit, but it turned out to be a good crowd. 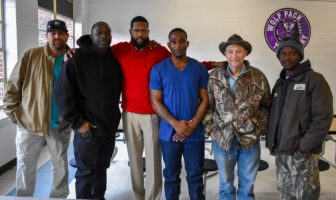 Because of the high participation, administrators decided to continue the program at Cleveland Central Middle. Bell said the participation has increased this year as well.

“Our cafeteria has a capacity of 250 people and this is our third All Pro Dads for the 2017-2018 school year, and each time I can honestly say the cafeteria has been near capacity. That’s good,” said Bell.

“Mind you we have 480 something odd students and to have half the number of dads to show up that really speaks volumes.”

Some fathers expressed different reasons why programs like these are vital to building stronger relationships with their child.

“It [the program] helps push them [students] and it gives them motivation to see their father active,” said John Hankins.

And it also gives fathers a chance to step up, said Michael Hankins. He went on to say that fathers aren’t as involved in school as much as mothers are, but this gives them that chance. Although his son, isn’t an A student, he said his grades have rapidly increased this semester.

However, he mentioned that he wasn’t sure if his grades increased because he’s more present at the school or not, but he said knows his presence has positively impacted his son. 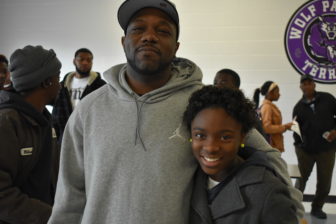 Timisky Poston, from Pace, Miss. but currently lives in Renova, Miss, said this shows his daughter, seventh grader, Timya Poston, that he’s a man of his word and that he wants to build a trusting relationship with her.

“She’s a child and there’s only so much you can do as far as building your trust with a child. Those are some of the steps you take to do that… school functions, just any kind of support you can give, you just try to give it,” said Poston.

“It’s something for dads and its father-daughter time. It’s important to take advantage of that whenever possible.”

Not only does this program give fathers an outlet to share what their child means to them, it gives a chance to participate in discussions centered around issues kids may be dealing with, along with problem solving techniques.

Every meeting, Rimmer facilitates and presents a short speech on different topics that students go through on a day-to-day basis — whether it’s school-related or everyday life.

He asked parents to share reasons for why they are proud of their children. Answers ranged from being studious to getting good grades to being talented to improving behavior to just being a great kid.

He, then, went into a discussion centered around the power of discovery and how to find the problems their children are dealing and discusses ways to solve those issues.

He gave an example of how a person may go to the doctor and discover they have cancer. After learning of this, they’re going to try to discover solutions. This is the same thought behind helping the students and their community, he said.

“You may say, ‘Dang, my kid is doing bad,’ then you may discover they need tutoring,” he said. “Discover why they’re doing that, who they’re hanging with, what’s on their Instagram, what’s on their Facebook … Discover what’s going on.”

He encouraged audience members to continue to be involved with All Pro Dads, to investigate the problems, help children better themselves by staying engaged, and continue to motivate them.

All Pro Dad, an organization founded by Tony Dungy, former professional football player and head coach in the NFL, is geared towards giving fathers a chance to spend time with their children in school in hopes of strengthening their relationships in a way that will benefit the child, school, and community.

This program started in Indiana by Dungy and has now expanded to 45 states and five countries. Currently, there are 1,474 chapters.

Cleveland is one of the seven cities in Mississippi that offers the program to its students. Other cities in the state include: Canton, Clinton, Columbia, Corinth, Hattiesburg, and Lake Cormorant.

The benefits of the program include improving test scores, enhancing creativity, increasing motivation, engaging fathers, connecting families, and transforming communities, according to allprodadsday.com 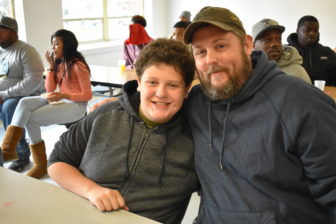 Bell said he’s noticed that fathers are more proactive in terms of being more present in the school, conversing more with teachers and administrators, and checking in on their children. Being able to provide this program makes parents feel the school is a more welcoming environment, he said.

“In my own experience, and I am a father, [dads] we’re involved in our children’s lives, but not so much as moms in terms of school. You always see moms entering schools,” said Bell. “For us, it’s like pulling teeth sometimes. I don’t know if dads think they’re not welcomed, but it’s a positive thing and we want to keep this going.”

“This shows kids they get support from their dads and that’s something a lot of kids in the Delta don’t have,” said Mark Hall. 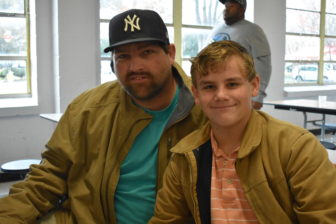 “Some of my kinfolks don’t have dads that I help out, and you can tell the difference in a kid that has somebody there and somebody not,” he said. Although he has a time-consuming job, he said making time to support his eighth grader, Hunter, is the most important thing.

In turn, the children are excited to see their dads at school, said Bell.

“When the dads are coming, it’s all smiles,” he said. “You can see they’re proud and elated when the fathers come … They’re pleased when their fathers take interest in their education and willing to take the time to spend some time with us and get to know us. It usually makes their day.”

To start a chapter, it only requires presenting the program to the school and paying a $50 annual membership fee. The organization provides a monthly curriculum, discussion questions, promotional tools, and different activities for parents and students to participate. Incentives like door prizes and giveaways are also a part of the program.

“I think this something worthwhile. I think this is something all principals should look into doing to increase the parental involvement especially with dads,” said Bell. 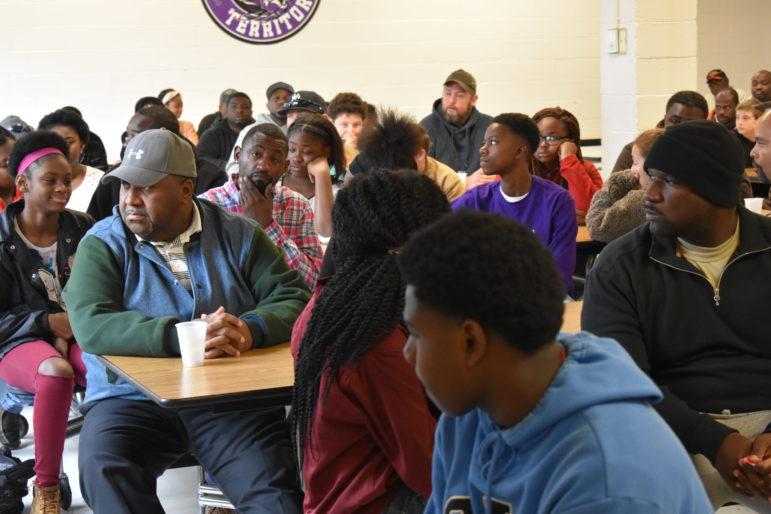 Audience members engaged in dialogue Friday’s event. All Pro Dad, an organization founded by Tony Dungy, former professional football player and head coach in the NFL, is geared towards giving fathers a chance to spend time with their children in schools.