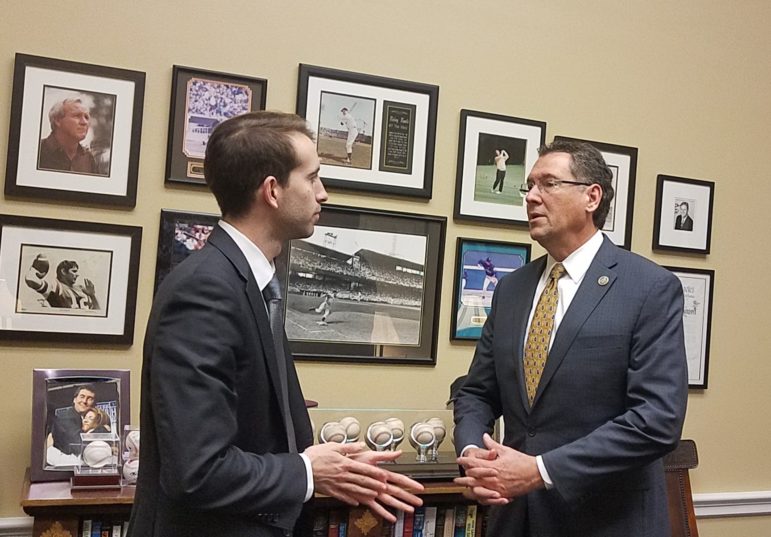 U.S. Rep. Gregg Harper (right), talks to a staffer ahead of a hearing will chair that could help reform how the House handles sexual harassment claims.

WASHINGTON — Mississippi congressman Gregg Harper now has a key role in addressing a culture of sexual harassment on Capitol Hill.

Harper chairs the House Administration Committee, which oversees the body’s day-to-day to operations. That committee will hold a hearing on preventing sexual harassment in Congress on Thursday morning.

In an interview in his congressional office in the Rayburn Building, Harper told Mississippi Today that he’s been working on the issue nonstop in recent weeks. In November, during a previous hearing of Harper’s committee, two female members of congress accused at least two unnamed congressmen of sexual harassment.

Subsequently, the House Ethics Committee launched a probe of Michigan Rep. John Conyers over harassment allegations. Conyers ultimately resigned his seat on Tuesday. This week, several women called for the resignation of U.S. Sen. Al Franken, D-Minnesota, who has also be the subject of several sexual harassment allegations.

Harper, a Republican who represents the 3rd Congressional District, which cuts across the state from southwest Mississippi to Meridian, said much of his focus has been on getting his arms around the scope of the problem in the House.

He said media reports that Congress has paid out approximately $17 million in legal settlements since 1997 have created a false perception that there is a rampant problem on Capitol Hill with sexual abuse. He noted that more than half that sum settled claims after anthrax attacks in 2002 and, later asbestos claims.

To date, Harper said a review going back to 2013 has uncovered one settlement from one House office totaling $84,000. The individual office has not been named. Politico has reported that $360,000 has been paid out to settle employee disputes.

Harper added that he’s also looking into whether any members settled sexual harassment claims from their office budgets, which are used to pay staff members. However, Harper said he expects that information will be difficult for his committee to obtain.

The Thursday hearing will focus on possible reforms to legislation passed in 1996 called the Congressional Accountability Act. Reforms being considered include more sexual harassment training and improvements to the reporting and settlement process involving sexual harassment claims. Victoria Lipnic, the acting commissioner of the Equal Employment Opportunity Commission, is among those who are scheduled to speak at the hearing.

Every allegation tarnishes the House’s reputation, and should be taken seriously, he added.

“Some cases are resolved simply with an apology and a new path forward. Others go further, some may wind up in litigation,” he said, but the key is making sure “that a person who is victim does not wind up being a victim a second time because of a difficult process.”

“This is the responsibility of each member. If the member and chiefs of staff say ‘This is not going to be tolerated,’ everyone is going to understand,” Harper said. “But you have to make sure that the person who comes forward and has a claim is treated fairly and that their option can’t just be (to) quit  and go somewhere else.”

“There has to be that accountability for the member,” Harper said.