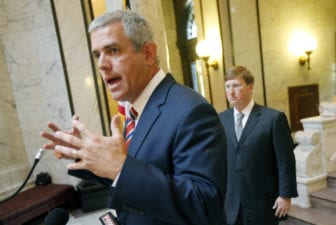 As debate over infrastructure funding – particularly raising the state’s 18.4-cent per gallon gas tax – continues to intensify, legislative leaders are signaling that they have no stomach for that method of funding road projects.

The issue could highlight next year’s legislative session, still four months away, as Mississippi Department of Transportation officials delay road projects and say they will struggle to adequately maintain the state’s roads and bridges under current funding.

MDOT, despite the help of powerful lobbyists and interest groups, has failed for several years to convince the Legislature to fund its stated needs: $400 million more per year — a conservative estimate, experts say — to sufficiently address the state’s infrastructure problem.

Last week, the Senate Transportation committee called in Mississippi Department of Revenue officials, who presented revenue estimates to senators should they decide to raise the state’s gas tax by seven cents per gallon. Raising the gas tax by that margin would bring in an additional $164 million per year in revenue, officials said.

Conservative Republicans, led by Lt. Gov. Tate Reeves and House Speaker Philip Gunn, generally oppose tax hikes of any kind for any purpose. Some moderate Republicans and most Democrats, staring down the undeniable infrastructure problem, may favor any funding mechanism that could immediately help get projects in their districts moving again.

Sen. Willie Simmons, D-Cleveland, called the Senate Transportation committee hearings last week on his own, without the directive of Reeves or any other leader. At least one Republican, Sen. Billy Hudson, R-Hattiesburg, left last week’s meetings in favor of raising the gas tax.

But so far, both top leaders under the dome are standing firm in their opposition to raising the tax.

“Since 2011, the Legislature has appropriated more than $7 billion for Mississippi roads and bridges,” said Laura Hipp, spokeswoman for Reeves. “Lt. Gov. Reeves believes we should direct more money to maintenance and repairs, and he believes we can do so without raising the gas tax and without implementing an illegal tax on Internet sales.”

“The House has been very diligent to search for solutions that do not involve increasing the overall tax burden,” Gunn said. “The solutions we have presented propose to use existing dollars or dollars that result from growth in the economy.”

The day after the Senate hearings ended, at least 11 Republican lawmakers attended a forum hosted by Americans for Prosperity – Mississippi, an advocacy group with a regular presence in the Capitol that organizes dozens of citizens each session in an effort to sway lawmakers their way on issues they deem important.

Sen. Michael Watson, R-Pascagoula, who sat on the group’s infrastructure panel on Saturday, promised never to vote for an increased gas tax – a sentiment shared by most at the event.

An expert from the Reason Foundation, a Washington-based conservative think-tank which annually studies transportation spending in all 50 states, cited several problems he sees within MDOT – including MDOT leaders being elected politicians instead of appointed industry experts, the agency’s prioritization of new projects instead of maintaining existing ones, and its focus on lowest-cost projects rather than best-value projects.

“There are several structural issues that tax increases cannot solve,” said Baruch Feigenbaum, assistant director of transportation policy at the foundation. “I work with DOTs across the country, and Mississippi DOT has some issues that are amazing to me … This (requested) revenue increase is just an excuse to not solve the underlying problems.”

Feigenbaum’s thoughts are shared – at least in part – by legislative leadership, which has long questioned MDOT’s travel expenses, vehicle fleet size, and projects that don’t include repairing roads and bridges.

In this year’s legislative session, several efforts to divert more funding to infrastructure improvement – mostly led by Gunn – caused internal bickering and ultimately failed to move forward. The infighting even led to a special session after three spending bills, including MDOT and State Aid Roads, were held hostage in the dispute.

Though he does not support a state-level tax increase, Gunn pitched a local gas tax option earlier this year as part of a seven-point infrastructure funding plan he says could generate as much as $350 million more per year.

Other proposals by Gunn, like diverting existing Internet sales tax revenue to infrastructure funds, have failed in the past year.

“We’re looking at models and throwing the idea out, generally,” Nathan Wells, Gunn’s chief of staff, said in May. “We didn’t want to be so specific with this that we would completely pigeonhole ourselves. But it could also be a sales tax instead of fuel tax. We’re willing to negotiate any of this and come up with something everyone’s happy with.”