CLARKSDALE – Tensions were high at a public hearing Monday evening on a proposed public charter school in this community.

Clarksdale Collegiate Public Charter School has advanced to the final stage of the state’s application process, which required a public hearing for comment on the proposed school that is targeted to open in Fall 2018. The hearing was held at City of Truth church. 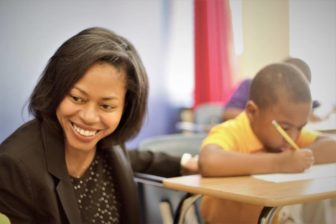 Amanda Johnson, the proposed director of the charter school, gave a brief overview of the school, which proposes to begin operation with 50 students in each of grades K-2. Long term plans envision an open enrollment K-8 school with a focus on college preparatory, she said. Johnson said they currently are still in search for a facility.

After Johnson’s presentation, some 20 people spoke for about five minutes each, sharing very strong viewpoints on public schools and charter schools.

Zamm said this charter school is special because of Johnson’s commitment to maximizing her time to spend with children. After reading Johnson’s 400-page proposal, Zamm said two things stood out to her and prompted her to speak out in support: three and a half hours dedicated to literacy and individualized intervention every day for students.

But others suggested that choosing a few students to attend the charter school isn’t fair to the rest of the students in Coahoma County.

“As we stand here … and we talk about support for a charter school and support for 150 children because parents have to have a choice for a good public school, I say to you, am I not my brother’s keeper? How do we choose which children we save of Clarksdale?” asked Ashley McKay, a community activist.

“When we take that 150, the rest of the children in Clarksdale and Coahoma County will still be in a struggling school system. … If all of these highly active things that we say we can do to get these children ready, give them this public education, why don’t we volunteer and do it inside of Coahoma County (public schools)?”

For another speaker, this new school could result in better trained professionals in the workforce.

“The better workforce we have that’s college trained improves our workforce in the community,” said Winter, a lifelong resident here. “I’m in full support of this application for Clarksdale Collegiate.”

Dr. Jimmy Wiley, a lifetime resident of Clarksdale, president of the Clarksdale/Coahoma County Chapter of the NAACP and an educator for more than 40 years, argued that the public charter school program is forming two separate but equal school systems that Brown v. Board of Education found unconstitutional.

“There are problems with the charter schools. Some have been successful, but if you look at the research on the subject, you will find that it’s only 25 percent greater than some of the public schools only in Math and Science,” said Wiley. “In other respects, it is no better than the public schools. We don’t want funds being ciphered off from the public schools to the private schools because we’re headed for two systems we thought Brown v Board of Education had resolved in 1954.”

Wiley said he and others aren’t opposing for the sake of opposing, but he’s speaking on behalf of the local NAACP chapter, and they are “fighting teeth and nails” so the school won’t get authorized.

Nancy Banks, mother of seven, drove from Arkansas to show her support for her longtime friend, Johnson. Banks said her children attended KIPP Delta Elementary Literacy Academy, a public charter school located in Helena, Ark., under the leadership of Johnson.

“I’m so in support for this school in Clarksdale, I’m willing to come over here when you guys give the okay for this school to open to recruit and get students in here because I believe in the charter school. The charter schools go far and beyond to help your child get them to where they need to be,” said Banks. “I see her vision. We need this in the Delta. We needed it in Helena.”

Marilyn Young from Southern Echo said she was not in favor mainly because in her view charter schools are private schools that take away public funds.

“Charter schools are considered private schools – privately owned, privately governed, but publicly funded,” said Young. “These charter schools will divert money from the public schools. Just for 100 children leaving Clarksdale public schools is a million dollar hit to Mr. (Superintendent Dennis) Dupree’s budget, so some serious decisions have to be made.”

Young added: “The sad part about this deal is the legislature isn’t even funding traditional public schools. Every year we get cut after cut after cut.”

Rob Tyner, president of the Clarksdale Municipal School District board of trustees, spoke in opposition, but as an individual and not a board member. He said Clarksdale’s population is already declining and the current school system is struggling.

“When I hear about the process of opening a charter school, one of the concerns that comes to mind is our population decline in Clarksdale that the authorizing board probably does not know about and needs to look at when it considers whether or not it should approve a charter school,” said Tyner. 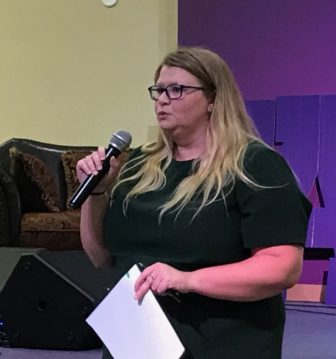 Marian Shutte, director of Mississippi Charter School Authorizer Board, speaking to audience about the charter school authorizing process at The City of Truth church.

Jon C. Brown, a deacon in the area, and Darell Dixon, a local preacher, both expressed hope that this could work if the community can be more supportive.

“I ask that the authorizer board would give the application as well as those applying its full consideration,” Dixon said. “I ask that our community and those who will be served by the school also do the same.”

“We as citizens of the city of Clarksdale shouldn’t be mad. We shouldn’t be angry. We should want our children to go to school and learn and have a good education,” said Brown. “Mrs. Johnson is doing a great job … We need to be more supportive.”

Johnson founded and led KIPP Delta Elementary Literacy Academy which she noted outperformed the other public schools in Helena.

“We truly believe in the potential of all students in the Mississippi Delta,” said Johnson. “We believe that we can have a structured, ambitious, and jubilant school, and we intend on providing that for families here in Clarksdale and surrounding areas.”

Marian Shutte, director of the Mississippi Charter School Authorizer Board, said this was by far one of the largest crowds they’ve had for a public hearing on a charter school application.

The board will make its final decision on which, if any, schools will be allowed to open at the Sept. 11 meeting. Two other schools — in Sunflower County and Canton school districts — are also seeking authorization to begin teaching students in Fall 2018.