“You got a 3-mil (tax) going off and a 3-mil (tax) coming on,” said Richard Boggs, board member. “The only money we get is through your taxes, through the state or the county.” 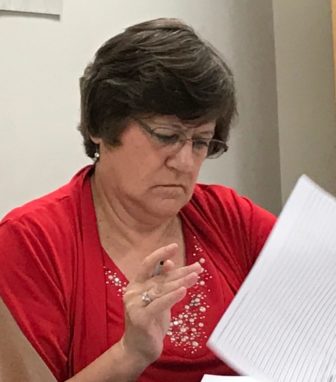 District business manager Cindy Holtz noted that the district is reducing the special millage from 2.59 mills to 2.37 mills for this school year. State law gives school districts authority to levy up to 3 mills in local ad valorem taxes for school improvements.

“Millage will not be as much as the past year even with the note included,” she said.

Added Fuller: “The 3 mil note increase is what they’re calling it, but we’re not getting the full 3 mils. As a matter of fact, what’s coming off is more than what we requested, so there’s going to be a net reduction in what’s coming to the school district.”

The district’s base operating revenue includes 55 mills, the maximum allowed under state law and the same as the past year, Holtz said. So coupled with the lower 3-mill tax levy, overall taxes for individual homeowners will drop slightly, she said.

An estimate of the ad valorem taxes for next year were on display on the television screen mounted on the wall as Holtz detailed the budget. The display showed an estimate of $10.1 million for next year brought in by the existing 55 mill rate. That is based on a tentative valuation of property in the district of $183.9 million.

“That’s going to change some. The property owners have a chance to dispute the value of their property and normally that number will come down a little bit, but normally not a whole lot,” said Holtz.

The district is currently at the state-established limit of 55-mills for regular operations.

Holtz said that this isn’t uncommon for a district. During 2017, there are 36 districts in the state that are at 55 mils or higher, she said, based on a report she got from the state tax commission.

“The reason from the most of this is because of state under funding,” said Holtz.

Holtz also said that if the Mississippi Adequate Education Program was fully funded by the Legislature, the district would receive $17,057,508. However, the district is allocated $15,559,673, which is about $1.5 million less, she said.

“You can’t make up $1.5 million this year,” she said. “The local taxpayers can’t make that up. This district has had to rely heavily on local taxes.”

“Think of all the things you have to do,” said Holtz. “You’re 11 million dollars behind” — the difference between the underfunding of MAEP and the increase in local ad valorem taxes.

Holtz said some of the expenditures increasing for next year include: personnel increases, two school buses, transportation routing software, iPads for fifth graders, refinishing floors and carpets at the new high and middle schools, ordering tables and chairs, and branding.

“I’m comfortable that we’ve got the funds to do what needs to get done,” said Holtz.