The NCAA released statistical data about Division I basketball transfers last week and one number startled this writer like a Michael Jordan slam dunk.

That is, 40 percent of all men’s basketball players who enter Division I directly out of high school depart their initial school by the end of their sophomore year.

That means if Coach A at State U. signs five players this season, two likely won’t finish their sophomore year at State U. And those two will join a growing number of players who are deciding the basketball pasture in greener elsewhere. Several Mississippi coaches have called the basketball transfer situation an epidemic with no end in sight. It seems, more and more, college basketball players consider themselves free agents.

More than 700 Division I college basketball players transferred during the past year. There are 352 schools. That’s some pretty easy math. D-I schools lose an average of two players per year, transferring to other schools. 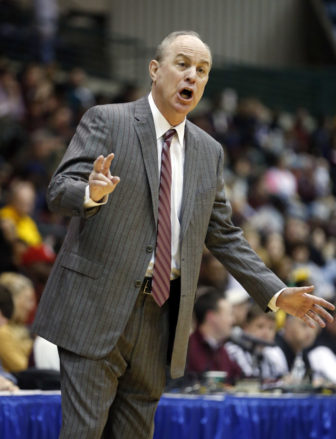 Says Mississippi State’s Ben Howland, “We’ve lost only two players over the past two seasons, so we’re actually below the average. I know this: It’s happening way too much in our sport.”

Howland may have lost “only” two over two years, but both were impact players. Malik Newman, a McDonald’s All American in 2016 and one of the most highly sought after recruits in Mississippi history, left State for Kansas after averaging 11.3 points per game as a freshman. Mario Kegler, a 6-foot, 9-inch forward averaged 9.7 points and 5.5 rebounds per game, second in both categories, as a freshman last season. He’s headed for Baylor. Newman had to sit out last season. Kegler has to sit out this season.

This will be Kegler’s fourth school in four years. He played at Jackson Callaway as a high school junior, Oak Hill Academy as a prep senior, State as a college freshman and now Baylor. Kegler’s case is all too common, says Southern Miss coach Doc Sadler.

“A lot of the transfers just aren’t the traditional guys who go the same high school for four years,” Sadler said. “They’ve transferred high schools, once or maybe twice. They’ve played on several different AAU teams. If any sort of adversity hits, they automatically look for another place to play. In my mind, there’s nothing wrong with kids facing a little adversity and fighting through it. We just don’t see that much any more. It’s not just basketball, it seems a generational thing to me.”

Sadler is probably right, but college basketball is where it shows up most.

And some people believe that’s not a bad thing. Ron Dauster, of NBCSports.com, writes: “There is no such thing as a ‘transfer epidemic’ in college basketball, there are only players doing what every American does: Trying to better their situation in life.” 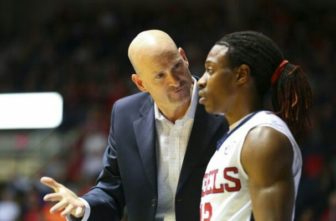 Ole Miss coach Andy Kennedy was a college transfer himself. He signed with the legendary Jim Valvano at North Carolina State out of Louisville High School and then transferred to UAB to play for Gene Bartow as a sophomore. He averaged 19 points per game in three seasons at UAB.

“In my case, the transfer ended up being good for me,” Kennedy said. “I had been an 18-year-old hotshot, used to being the star, and I got to N.C. State and was behind Vinny Del Negro, who later played 12 years in the NBA, and I was going to be behind him for another season. At 18, I wasn’t very patient.”

At UAB, he became the school’s all-time leading scorer. He uses his experience in his coaching.

Kennedy said he meets with every player at the end of every season for a conversation about what is best for the player’s and the team’s future. And Kennedy is far from adverse to taking transfers from elsewhere. Some have been his most prominent players.

“We’ve had Stefon Moody, who played at two schools before he came to us,” Kennedy said. “We’ve had Marshall Henderson, and we were Marshall’s fourth school.”

Both Henderson and Moody won the C Spire Bailey Howell Trophy as the most outstanding college basketball player in Mississippi. Moody won it twice.

This season, Kennedy’s roster will include Deandre Burnett (from Miami),  Markel Crawford (a graduate transfer from Memphis) and 7-footer Dominik Olejniczak (from Drake.) All are expected to be key contributors. 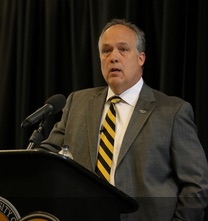 At Southern Miss, Sadler’s backcourt will be greatly enhanced with transfers Tyree Griffin of Oklahoma State and Dominic Magee of Memphis (by way of Grand Canyon CC), who both reportedly transferred to USM to get closer to their New Orleans-area homes. Sadler believes both will be among the best guards in Conference USA. But that doesn’t mean Sadler likes the trend of widespread transfers in Division I basketball. He’s lost his share, too.

“It’s a problem for everyone, but it’s even more of an issue for low level and mid-majors (which is where USM falls),” Sadler said. “So many players have some success at a lower level school and decide to transfer up. You’re seeing a lot of mid-majors just getting killed with guys transferring to the higher level. I’d love to see a statistic on how many of those guys are really successful at that next level.”

Sadler had several players transfer out when the NCAA put USM on probation from what occurred under his predecessor’s reign. His roster was decimated, and he says he understands the reasoning some of the players had. Every player in college basketball wants a chance to play in the post-season. USM’s penalties included a post-season ban.

But it particularly hurt when two seniors-to-be, who had already graduated from USM, chose to play their senior seasons elsewhere. Aaron Brown transferred to Boston College, Norvell Carey to Rider.

NCAA rules deem that a player who has graduated can transfer to another school without sitting out a year. The intent of that rule, instituted in 2006, was to enhance educational opportunities. But graduate transfers have increased 500 percent in the past five years. Graduate degrees haven’t necessarily increased. NCAA statistics show that only 34 percent of players earn a graduate degree after transferring.

“It’s a terrible rule and it’s killing the lower level schools,” said Howland, who once coached at Northern Arizona, before moving on to Pittsburgh and UCLA. “Coaches are getting fired because of it. You coach a guy up for three or four years and then he leaves to play at a higher level and doesn’t even have to sit out a year. You build your program around certain players, and then they leave. People are kidding themselves if they think the majority of these players are leaving for educational purposes. It’s about basketball. With this generation, it’s all about ‘me.’” 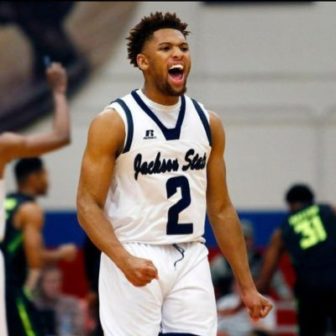 Jackson State’s Wayne Brent agrees, and he knows what it is doing to SWAC basketball. This past season Edric Dennis, a sophomore guard from Dallas, averaged 33 minutes a game and was his team’s second leading scorer at 14 points per game. He was a good student, a hard-worker, the kind of player you build your program around. At season’s end, he informed Brent he was transferring to Texas-Arlington.

Brent believes Dennis left because at UT-Arlington he will receive a cost of attendance stipend, something Jackson State can’t afford to pay.

“It’s hurting the SWAC all over,” Brent said. “At Texas Southern, Mike Davis is losing his two top players off a championship team to transfers. It’s hurting all the lower level schools.”

Brent doesn’t blame a player for trying to better himself, but he does resent the fact that he and JSU might get penalized for players, such as Dennis, who transfer out. Whatever happens with Dennis at his new school academically, Jackson State is held accountable. 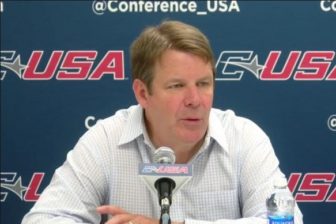 He will begin the discussion by asserting that most players transfer because they want to better their chances of reaching the NBA and then he will ask you how many on the NBA’s all-time Top 50 players list transferred during college. We’ll get to that.

“It’s a culture we established,” Floyd said. “You’ve got players at the AAU who play for one team in the morning and then another in the afternoon, because they didn’t get enough shots in the morning. It’s me, me, me.

Floyd contends many schools in power conferences are now making a living off transfers from other schools. He points to his former school Iowa State, which has a roster that includes transfers from Arkansas, Iowa Western, Nebraska, Virginia, Princeton and Texas Arlington.

“I’ve got good friends, good coaches, in this business who have lost their jobs because of transfers,” Floyd said.

“A year ago the Big South Conference (mid-level D-1) had all five players from its All-Newcomer team to transfer out,” Floyd said. “Don’t tell me it’s not an epidemic.”

Even Andy Kennedy, who has benefited so much from transfers, agrees it has gotten out of hand.

“So much instability isn’t good for anything,” he said.

What can be done?

• Establish some kind of tampering rule that penalizes teams for recruiting from other teams’ rosters. Yes, this would be complicated, but if high school athletic associations can do it, surely the NCAA can.

• Where graduation rates and Academic Progress Rates (APR) are concerned, hold the school accepting the transfer accountable, not the school from which he is transferring.

Oh yes, and the number of Top 50 all-time NBA players, who transferred during their college careers?

Only one: Larry Bird.