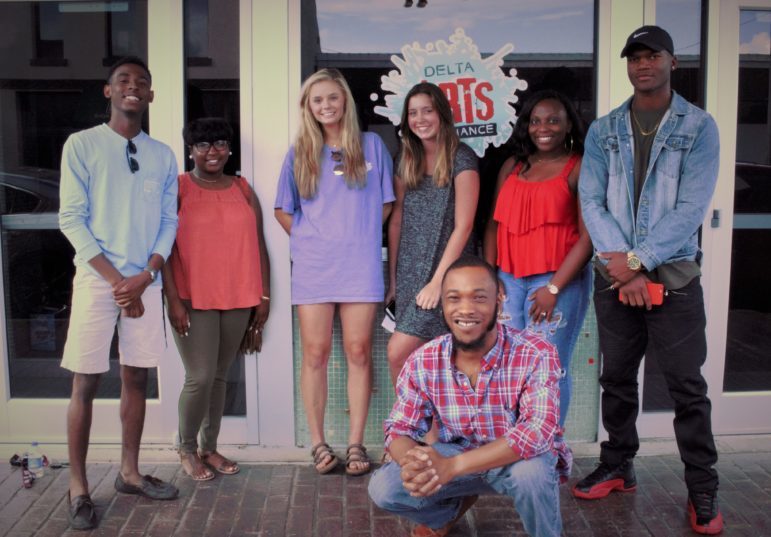 CLEVELAND – Six students from the last graduating classes from Cleveland High School and East Side High School expressed their thoughts and feelings about their town, school experiences, and the upcoming school consolidation in a roundtable discussion here recently.

The conversation was convened as part of the Cleveland  Yearbook, a community news project by the Delta Arts Alliance and Reveal from the Center for Investigative Reporting, that seeks to create a snapshot of Cleveland through the eyes of its people.

Cheryl Devall, Senior Radio Editor for Reveal, teamed up with Charles Coleman, Project Manager for the Cleveland Yearbook, to have dialogue with a small group of students on Skype about what is going on in their town from their point of view.

Mississippi Today was invited to observe and report on the exchange of views from the students. Here is an edited transcript of a portion of the discussion in which the students discussed some aspects of life in the public schools in Cleveland. Students are identified by their last name with an (E) for East Side High School or a (C) for Cleveland High School:

Devall: So, when other people talk with you about this, you know about the fact you’re making history or any of that, what do you say back to them? Or do you just not pay it any mind?

Hardy (C): I mean it’s just something that we’ve heard a lot before, so we just say the same thing every time like oh, we’re honored to be the last … yeah, we’re gonna miss it. That’s all I can really say about it.

Trotter (E): Yeah, it’s a lot of talk, but it don’t really come from us, it’s from parents and others

Devall: So, what would you say back to them? Maybe that thing you kind of wish you said, but afraid –

Trotter (E): That’s what I want to tell a lot of people. Can you stop talking about it ‘cause you really are getting on my nerves. I mean at a certain point of time you hear it so much, and sometimes it be coming from the same people or the same group of people. You already know how we feel so why do you keep asking us the same question?  …  Go to the board, go to the judge, go to the people like that. You already know how we feel. We don’t want it to happen, but we’ve accepted it, and we’re moving on.

Hardy (C): Yeah, like she said we always get asked about the past like over and over again and nobody ever asked us about the future.

Richards (E): I know at the barbershop, they ask me about the football team a lot. They think it’s going to be a lot of conflict, but really it ain’t. Everybody that played for Cleveland High kind of stay in the same neighborhood as East Side, and wherever we lacked at, in that particular position, then we kind of gained when we joined together. So, it’ll be a better football team overall. It really won’t be no conflict. It was like  a rivalry thing ‘cause it’s tradition, but it don’t too much matter now.

Devall:  When you say the same people are asking about it, what do you mean? 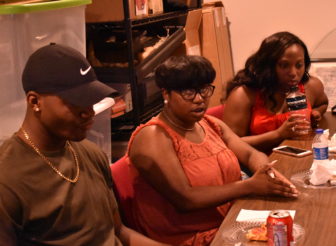 Trotter (E): It’s mostly coming from people who don’t have children in the school district or people that it won’t even affect. They’re always asking us how we feel about it and what they think when really their opinion doesn’t matter ‘cause they won’t be affected by it anyway it goes.

Hardy (C): I think one reason that’s kind of annoying is like that’s the reason it’s happening is because people who it has no impact on, no effect on, they’re the ones that came in and came and made us change … like people up in New Hampshire coming in and reporting all of this stuff, writing all that stuff on the internet, writing about how terrible we are when they’ve probably never set foot in Cleveland or Mississippi at at all.

Watson (E):  I feel like outsiders try to make it a race thing because like East Side … it’s 100 percent African-American except for one Mexican girl, and Cleveland High is majority white, and they have different –

Devall: But did any of you ever think about going to the other school?

Trotter (E): I went to the other school. I left Hayes Cooper, and I went to Margaret Green. And then, my mother was a Trojan. She graduated from East Side … I felt I had better opportunities at East Side than I did Cleveland High. I stayed closer to East Side, and now look at me. I’m the last Miss East Side, so I feel like that was the best choice I could have made personally for me.

Hardy (C):  A lot of it has to do with where your parents went to school. I know my dad and my grandfather and like two of my aunts and my uncle, they all went to Cleveland High, so like why would I go to East Side when my whole family went to Cleveland High School? And I think a lot of other people feel the same way, I’m sure.

Carmichael (C): I had family members who went to East Side and Cleveland High, so I just had the choice to go to either one. But my big thing on choosing a school I wanted to go to, I wanted more of a diverse group of people. I wanted to see other races, so I chose Cleveland High.

McLaughlin (C): My parents, the past two years, they haven’t tried to push anything on me, but they made it clear it was my choice to go wherever I wanted to go. We’re not from here, so my parents have very different views from a lot of people who have grown up living here. The majority of my friends are at Cleveland High, so I stayed there. I was already working to skip a grade, but I did take as many classes as I could at East Side.

Devall: Do you see or can you imagine what the schools are going to be like once they do get together?

Hardy (C): My little brother … he wouldn’t go to private school for the people, but as far as athletics go, I mean every kid wants to play a sport in high school. He’s not that big. He’s smaller than everyone else. He’s not gonna have much of a chance at a 5A school.

Watson (E): Some people will get looked over just because of how big the school will be. With East Side, you had the opportunity to shine just because it was a smaller school, and you were able to get looked at easier. But at a 5A school, you will have some people that outshine others and everyone won’t have an equal opportunity. Even in class, with a bigger class it’s harder to see everyone and give everyone the same attention that everyone needs.

Richards (E): I got two twin brothers, probably in the seventh or eighth grade, they would probably rather go to Cleveland High anyways than East Side because I would say they are a little weaker … With everybody coming together, it’ll make them tougher and have them ready for the real world. 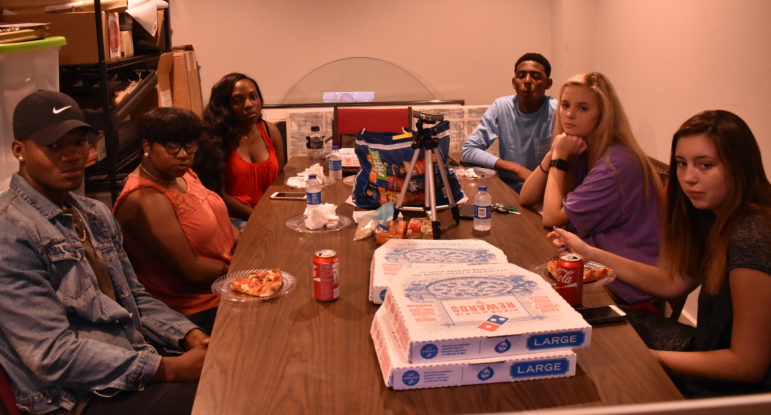 Participants engage in conversation via Skype over refreshments and food.

Coleman: What advice would you give to the school board on implementing certain ways or processes so that the new school year could go more at ease? Like activities for students or teachers?

Trotter (E): I would honestly say keep the kids first. Keep kids first. Don’t worry about what parents have to say.

Hardy (C): Talk to the kids. Ask the kids what they want.

Watson (E):  And it should be a vote on everything like it was for the school name and mascot. It should be –

Watson (E): You have parents that like to talk and vote on stuff, but they actually don’t have to go through with the decisions and change their ways because they just have to drop us off at school. Then, we don’t see them until we get home.

Devall: What should your parents know about where you are in relation to each other’s schools and in relation to what Cleveland could be? What do you think they ought to know about this moment that maybe you’ve been afraid to tell them?

McLaughlin (C): I tell my parents everything really. My dad grew up in California and my mom lived in Knoxville, Tenn. Their opinions, their beliefs, are very different from that of all of my friend’s parents. They’ve been for the consolidation the whole time we’ve lived here … They’ve even toured Bayou [Academy] and my sister is going there next year. I know it caused quite a bit of argument in our family for a while. I’m honored to be the last class, but if I were from here, it would probably mean more to me, but I’m glad it’s happening … My parents … it doesn’t affect them as much as it does a lot of Cleveland people that live here.

Hardy (C): I completely understand her viewpoint because I know if I didn’t have family from here I probably wouldn’t be as concerned about it. My dad, he hates to see Cleveland High School go because he was really involved in every way possible as were his parents. Coming from my parents, it’s sad because Cleveland High School isn’t going to be any longer.

Carmichael (C): My parents, neither one of them graduated from Cleveland High or East Side, so they’re kind of okay with it. They’re fine with the consolidation. They believe everyone should come together and be together at one same school. I think it’s going to be okay because I have a younger brother, and I think he’ll be fine growing up in a diverse environment.

Trotter (E): I would tell my parents I am who I am today because of my experiences on both sides of town. I’ve experienced being a Margaret Green Junior High Wildcat, an East Side High School Trojan, and I couldn’t have been a better person if it weren’t for both the experiences I’ve had.

Watson (E): Of course everyone is sad to see us losing our schools and traditions, but my mother feels that it’ll be beneficial to Cleveland as a whole, not just one separate group, but all benefit from the combining.

Reveal – a website, public radio program, podcast and social media platform – is where the Center for Investigative Reporting publishes its work. The mission is to engage and empower the public through investigative journalism and groundbreaking storytelling in order to spark action, improve lives and protect our democracy.