This story is our weekly ‘Sip of Culture, a partnership between Mississippi Today and The ‘Sip Magazine. For more stories like this or to learn more about The ‘Sip, visit thesipmag.com.

When it was built in 1951, a turn-of-the-century modern home on Ridge Drive in Jackson was a curiosity. Most folks had never seen anything like it. The home is still a bit of a curiosity today as neighbors walk by, admiring it and wishing they could see what’s inside.

Members of the Mississippi Heritage Trust had that very opportunity recently when they held “A Mad Mod Affair,” offering tours of the home that now belongs to Craig and Stephanie Busbea. It’s a home that the couple has lovingly restored to be a perfect example of a mid-century modern home. It was exciting for the Busbeas to share their home and tell about the restoration work. The tour generated great excitement from neighbors, who had never before seen the interior of the unique home. 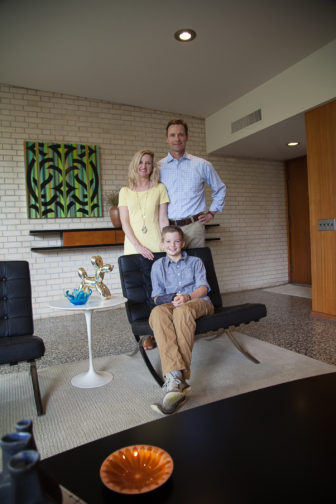 Stephanie and Craig Busbea with their son, Graham Busbea sit in the living room on their mid-century modern home in Fondren.

“We purchased the home in 2002,” said Stephanie Busbea. “Although we said we’d never live in another home that needed to be remodeled, we spent seven years doing just that with this home. There were several issues we needed to attend to, including mildew, plumbing issues and flooring in the 1957 addition. We just did it one room at a time and now we have this.”

The home was designed by William B. and Samuel G. Weiner, two of the first generation of modern masters. They worked primarily in the Shreveport, La., area, but two of the homes they designed are in Jackson and were designed specifically for their cousins. The Busbea’s home, originally designed for Dr. William B. Wiener, is located on Ridge Drive, and a home on Redbud Drive in Jackson was designed for Dr. Wiener’s brother, Dr. Julian Weiner and his wife, Katherine.

The Busbeas have the original house plans. Unlike most plans seen today, the plans for the home included architect’s notes on not only where to hang artwork, but also the size and kind of artwork. The home is of the International style, which includes windows with minimal exterior surrounds, set flush in the wall so they are seen as a continuation, not an interruption, in the linear surface of the wall. The home also features many “ribbon” windows which reinforce the style’s horizontal lines. The Wieners lived in the home until Wiener’s wife, Carolyn, died in 1998 and he died in 2001. The heirs of the home sold it to the Busbea family in 2002. 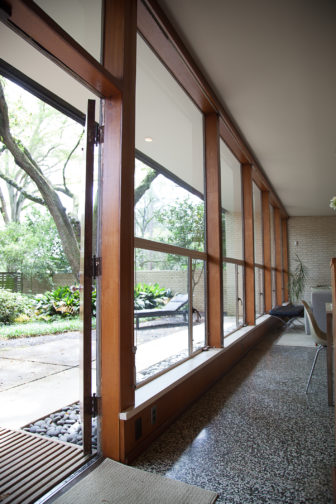 The flush windows of the Weiner Home allow the outside to come in.

Finding people to work on the home was a difficult, if not an often impossible task.

“The construction is unlike today’s home construction,” said Busbea. “Because we are perfectionists, my husband and I began doing research, and we ended up doing much of the work ourselves. That’s one reason it took so long.”

The first thing guests see when approaching the home is a two-car carport, placed prominently in the design to feature the importance of the automobile in the modern era. The entrance is to the right of the carport, accessed from a covered, rectangular patio. Inside, it’s apparent that the home was designed to bring the outdoors in. Window placement allows visitors to see a view down the hall and out the master bedroom window and large floor-to-ceiling windows flank one wall the living room.

One of the most impressive features of the home is the original terrazzo floors, which are in perfect condition.

“We have not found one crack in any of the floors,” said Busbea.

Throughout much of the home, the floors are a black and white marble pattern, which looks like specks of stone or marble.

“Terrazzo was used in hospitals, schools and other public places in the 1950s,” explained Busbea. “It would be too cost-prohibitive for most homes today.” 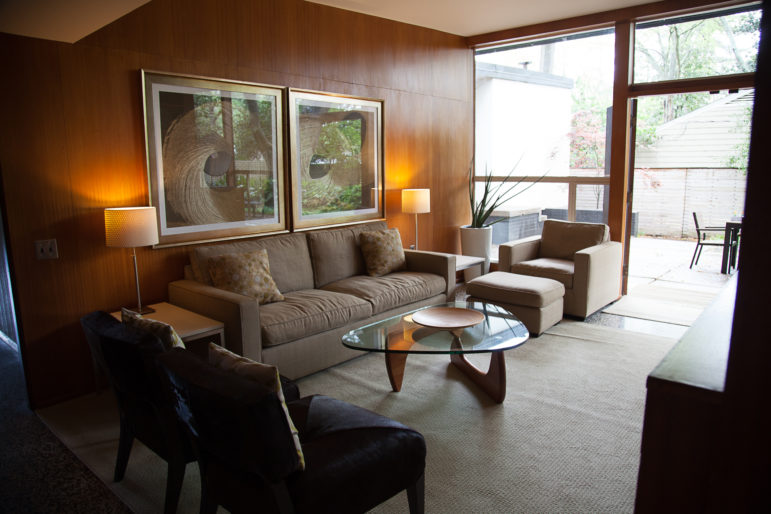 Inside the historic Weiner House in Jackson’s Fondren district

The 1957 addition, which includes two bedrooms and a library, had cork floors that were in bad shape when the Busbea family purchased the home. They replaced them with new cork floors in 2009. The bathroom in that area has new ceramic flooring and a new vanity, but the original mint green tile walls, bathtub, toilet and some of the built-in cabinets remain.

The grounds of the home are just as impressive as the interior. Designed by the late Jim Somers in collaboration with Gary Graves, the exterior design is very clean and linear. A rotten deck was removed in 2005 to expose most of the original concrete pavers. Additional pavers the same size were added to fill in the patio area. A bocce ball court is visible from inside the home. 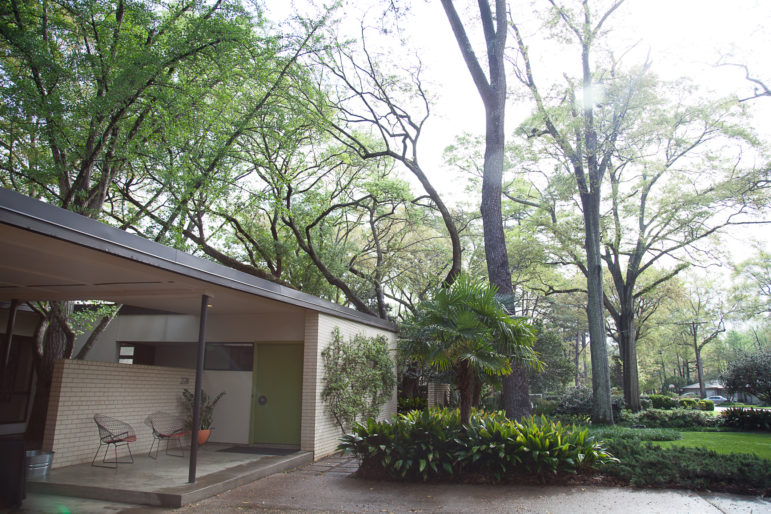 The Weiner House, designed by Samuel and William Weiner, at 228 Ridge Drive, in Jackson

Back inside, the den features built-in bookcases and cabinets original to the home. Originally designed to house a stereo system, the unit was most likely inspired by Herman Miller design. The walls and doors in the den are covered in ribbon mahogany which emphasizes the design. There is no trim around the doors to detract from the design.

The galley kitchen features the original stainless steel sink and stainless steel countertop on the north side which has windows that overlook the back yard. A divider with a window separates the kitchen from the breakfast area and butler’s pantry. Black stained cabinets give the kitchen a sleek, modern look, although the Busbeas learned that the cabinets were originally painted terra cotta with yellow walls.

The master bedroom is separated from the dressing area by a dividing wall made of closets, cabinets and drawers. The walls of the master bedroom are painted apple green with a matching comforter. The platform bed is anchored by a wood paneled wall that serves as a headboard. Large picture windows overlook a sculptural fig tree in the back yard.

More Mod tours have been scheduled by the Mississippi Heritage Trust this spring, including a Delta tour where participants toured several modern-era structures including the home of Clarksdale mayor Bill Luckett.

On May 5, an Insiders Architectural Tour & Cocktails will be held from 5:30 to 10 p.m. in the Fondren area of Jackson. Lovers of mod will gather at Kolb’s Cleaners on North State Street to learn about the upcoming transformation from a cleaners to a contemporary hotel, as well as exploring other areas of the Fondren architectural landscape. The event will take place the same night as Fondren’s annual Arts, Eats and Beats event. The event will conclude with a cocktail party on the rooftop terrace of the new home of Wier Boerner Allin Architecture.

For more information, call the Mississippi Heritage Trust office at 601-354-0200 or visit www.mississippiheritage.com and www.lovemsmod.com.