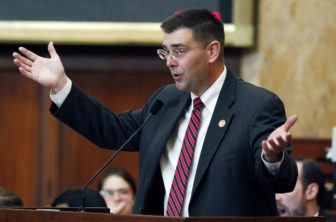 The House passed a bill Monday with an amendment that broadens the ability of domestic abuse victims to cite such abuse as grounds for divorce.

The amendment was proposed by Rep. Andy Gipson, R-Braxton, who came under criticism last week for killing a separate bill that would have made domestic violence grounds for divorce.

Gipson’s amendment to a bill that addresses abused and neglected children added clarifying definitions of domestic abuse. In killing the separate domestic abuse bill last week, Gipson said he was concerned that existing grounds for divorce that should have included domestic abuse were not being enforced properly.

The amendment adds “evidentiary standards” for judges to use in divorce cases, which would provide them with “guidance on what is abusive physical conduct, what constitutes abusive non-physical conduct and the standard of proof judges would have to apply.”

“It’s a problem of judicial discretion and judicial disparity, and by proposing this solution, we get down where the rubber meets the road and we provide real relief to victims of domestic abuse,” Gipson said during an interview with SuperTalk radio host J.T. Williamson on Monday afternoon when he first outlined his plan for the amendment.

The amendment also clarifies what constitutes habitual cruel and inhuman treatment, which is already a grounds for divorce in Mississippi, and include specific examples of physical and non-physical abuse.

Executive Director of the Center for Violence Prevention (CVP) Sandy Middleton called the amendment “a wonderful accomplishment for victims.” Her organization worked with Gipson to craft the amendment language.

“Just in the metro area, we’ve seen several domestic violence homicides of late and we know that the most dangerous time for the victim is when they try to leave,” Middleton said. “And so with good legislation like this and good policy like this, victims will be able to leave and will be able to get that final break from that abusive partner.”

The amendment also adds that the injured spouse can testify and the court consider them a credible witness. Under existing divorce law, an additional witness is required to corroborate that testimony.

“With this legislation the victim will be able to speak for themselves, and that’s huge,” Middleton said. “They can stand before the judge and tell their story.”

Under the amendment, spouses who physically hurt, attempt to hurt or threaten to cause harm to their spouses could be guilty of physical abuse. Non-physical abuse would include “threats or intimidation, emotional and/or verbal abuse, forced isolation, sexual extortion, sexual abuse, stalking, aggravated stalking, economic or financial abuse,” Gipson said.

In his SuperTalk interview, Gipson again defended his decision against allowing his committee to vote on the domestic-violence divorce bill, stressing that he needed time to come up with an appropriate solution.

That was the first divorce bill referred to his Judiciary B committee since he’s been chairman, Gipson said, and he had one week to look into it before a committee deadline.

“I had seven days to study it and research it and make a decision. And it took me longer than seven days,” Gipson said. “God made the world in six days and rested the seventh. I’m not God. It took us more time to get into the weeds on this to make a solution.”

In a release sent after the bill passed, Gipson said he was pleased to see the amendment adopted and thanked CVP, Middleton, House Speaker Philip Gunn and other members of the House for working with him to create the amendment.