Most Mississippians with even a cursory knowledge of the state’s history know Medgar Wiley Evers as a lion of the civil rights movement, a man who sacrificed his life for the good of his people.

But did you know he was also a college football star at Alcorn State, where he was a teammate of his brother, Charles? 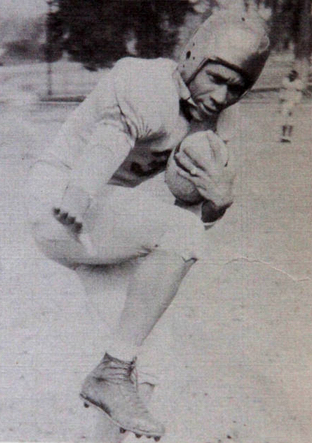 “Medgar played halfback and I played center,” Charles Evers, 94, said recently during an interview at his WMPR radio office in west Jackson. “Medgar could run that ball. He was fast. He could really run.”

Just to the right of Charles Evers’ desk hangs a photo of the 1949 Alcorn A & M football team. Easily recognizable on the front row are Medgar Evers, No. 29, and brother Charles, No. 31. Both have a grim, serious glare into the camera lens, as do their teammates.

“We were good, we had a good team,” Charles Evers said. “I can’t remember our record but we won nearly all our games. We had a whole bunch of good athletes.”

Both Charles and Medgar Evers (three years younger) grew up in Newton County and went to Alcorn as U.S. Army veterans, having served in World War II. Charles served in the Pacific Ocean theater, Medgar in Europe, where he fought in the Battle of Normandy. Both brothers, said Charles, volunteered for the Army before finishing high school. After the war, both finished high school at Alcorn and then stayed at Alcorn for college.

Charles Evers played through the 1950 season. Medgar Evers was a year behind and finished in 1951. Alcorn football records of that era are spotty, but the 1950 team finished 8-2 and won the South Central Athletic Conference championship. The ’51 team finished 8-3.

“I was not a great player, not nearly as good as Medgar,” Charles Evers said. “But I was a mean player. I’d kick ’em or stomp ’em, whatever it took. I was hot-headed. Medgar was the one always trying to calm me down.”

His brother was by far the better student, as well, Charles Ever said. “Medgar was all As and Bs,” he said.

“I was a C student,” he said, chuckling. “I was too busy chasing the women. I’m still chasing. Not catching, mind you, but I’m chasing.”

Both brothers stayed busy outside the football field and the classroom. They had what 99 percent of Alcorn students didn’t have at the time: a car. And they used it to make money.

“We ran a cleaning service,” Charles said. “We got a commission from a cleaners in Port Gibson. We would pick up and deliver clothes for students.”

They also ran a taxi service for students who needed rides to and from the bus station and other nearby destinations.

Said Charles, “There wasn’t much time for sleep.”

Davis Weathersby, later a coach and athletic director at Mississippi Valley State, was a teammate with Medgar Evers in 1951 when Weathersby was a freshman, Medgar a senior.

“Medgar was just a great guy, a natural leader, one of our captains,” Weathersby, now 84, said. “He was a good player, a good runner, but we had a lot of really good running backs at that time.”

The best, without question, was big Jack Spinks, who later became the first African American in Mississippi to play in the NFL. Nicknamed “The Ripper,” Spinks was usually the strongest – and fastest – man on the field. Once, when asked how he became so fast, Spinks answered: “Rabbit hunting.”

“You try catching those damned things; I didn’t have a gun,” Spinks is said to have answered.

“Big Jack would just as soon run over you as look at you,” Weathersby said.

Weathersby remembers Medgar Evers as perhaps the most busy man on campus. Besides football, Medgar ran track, sang in the school choir, was on the debate team and active in campus politics.

“I believe he was already organizing people to vote when he was at Alcorn,” Weathersby said.

Medgar Evers in 1954 applied for law school at Ole Miss but was turned down because of his race. Later in 1954, he became the NAACP’s first field secretary for Mississippi. On June 12, 1963, Medgar Evers, father of three, was gunned down in the driveway of his Jackson home.

On the 50th anniversary of his death, Medgar Evers was honored with a tribute at his Arlington National Cemetery grave. Said Myrlie Evers-Williams, his widow: “Medgar was a man who never wanted adoration, who never wanted to be in the limelight. He was a man who saw a job that needed to be done and he answered the call …”

His former Alcorn teammates, including his brother and Davis Weathersby, would tell you that also describes Medgar Evers, the football player.

Check out other news at mississippitoday.org and follows us on Twitter @MSTODAYnews.