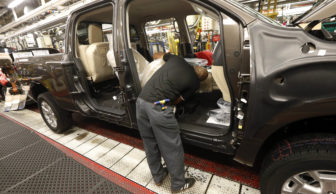 A technician installs a front seat inside a Titan truck while on the assembly line at the Nissan Canton Vehicle Assembly Plant in Canton, Miss., in April 2016.

The first violation, classified “serious” by OSHA, took place in December, when a technician’s left hand was caught in conveyor belt when the machine started unexpectedly, documents show. OSHA fined Nissan $8,465 for the violation and is instructing the company to install audible warning signals and lights to alert workers when the conveyor is about to start moving.

Regulators also said employees are inadequately trained on “lockout/tagout procedures,” whereby workers can disable electrical machinery if necessary. With the $12,675 fine for the second violation, fines total $21,140, although that sum could change after negotiations between the company and OSHA, which is common.

Regulators also cited Nissan for failure to log certain workplace injuries and illness in accordance with OSHA rules, but that violation did not result  in a fine.

Since 2008, OSHA has cited the Nissan Canton plant six times. Together, initial fines for these violations totaled $60,140.

Brian Brockman, a Nissan spokesman, said safety and well-being of employees is the company’s top priority.

“We dedicate extensive time and resources to safety programs and training at the plant. In fact, Nissan’s Canton plant has a safety record that is significantly better than the national average for automotive plants. Nissan is still evaluating the findings, and we will continue to work with OSHA through their established process to bring closure to these matters. We also continue to work on determining what can be done to prevent future occurrences,” Brockman told Mississippi Today via email.

A Nissan corporate fact sheet about the facility, which opened in 2003, also states that lost time rates — the amount of time employees miss work due to injuries and illness — are “substantially better at Nissan Canton than the industry average.”

In addition, Nissan says the company spent more than $6 million of safety at the plant and have 32 full-time employees devoted to health and safety, including 24 medical staff members for the 6,400-employee plant.

Eric Hearn has worked at Nissan for four and a half years.

Critics of working conditions inside the plant, including workers, paint an alternative picture. Current and former Nissan employees who spoke to Mississippi Today say that keeping the line moving is the prevailing dictum of plant management, who are under ever increasing pressuring to produce more cars in less time and at the lowest costs possible.

This tension has drawn the attention of the United Auto Workers labor union, which believes that the solution to improving conditions is to obtain collective bargaining rights for the workers.

For several years, the UAW has assembled a campaign, recruited workers who serve as spokespeople for their cause, enlisted celebrities including actors Danny Glover and Common, who is better known as a hip-hop artist, and launched their own investigations and sometimes published their findings through reports.

The union is planning a rally and march from downtown Canton to the Nissan plant on March 4. Glover, NAACP President Cornell Brooks and former Democratic presidential candidate and U.S. Sen. Bernie Sanders are slated to attend.

On Feb. 14, Mississippi Today met with current and former workers, at the UAW offices less than five miles from the plant. Each talked about how the hope and excitement they felt after getting one of the coveted jobs eventually faded after suffering injuries and what they describe as managers who are sometimes unsympathetic with workers.

Everlyn Cage, a 10-year Nissan worker, hurt her back on the job. After a year of medical leave, she was terminated, she says.

During Everlyn Cage’s 10 year career at Nissan, at least twice she says she drove herself to the emergency department after work because supervisors would not allow her to leave the assembly line to go to the the plant’s on-site medical clinic. After a back injury in 2012, she went on medical leave but was terminated one year later.

“I’ve seen workers crying and trying to rest in between times but they would not report (injuries) because they were afraid. They had seen what happened to either Nissan workers and they were afraid of losing their jobs,” Cage said. “And of course people need their jobs they have homes they have children they have jobs and they have responsibilities period for that very reason they won’t report it and they will suffer the consequences.”

Eric Hearn, who has worked at the plant for four-and-a-half years through a temporary staffing agency, said he believes many injuries are due to rising demand for Nissan’s vehicles.

He added that temporary, or contract, employees such as himself are even less likely to report injuries because they want to remain in Nissan’s good graces because they eventually want to become full-time Nissan workers, earning more and having better benefits.

Brockman, the company spokesman said, there are no exceptions to the value Nissan places on health and safety of its employees, that workers are encouraged to report injuries to supervisors immediately and that state law gives employees the option of whether to be cared for by the on-site medical staff or get outside treatment.

“The company dedicates extensive time and resources to safety training and injury prevention programs. We continually review and update our safety policies and procedures to ensure that they appropriate for the working conditions of our team members. In addition, Nissan has an active safety committee in the plant that includes employee representatives to give workers a direct voice in plant safety,” Brockman said.