OXFORD — During his first year in office, University of Mississippi Chancellor Jeffrey S. Vitter accomplished something no other leader of a university in the state has: appointing a vice chancellor for diversity and community engagement.

“For many years, we have been in the process to add (such a role).  Chancellor Vitter brought it to the forefront to make it happen,” says Dr. Donald Cole, assistant provost at the university.

“Diversity is a multifaceted component — academics, race, profession, sexual orientation, etc. It is in these areas where you bring different ideas and perspectives that make us a more imaginative and innovative community,” says Vitter.

Diversity was one of the topics that came up in Vitter’s Flagship Forums, conversations held with more than 200 groups on the university campus, around the state and in the nation during his first 100 days in office.

Vitter was appointed unanimously by the Board of Trustees of the Mississippi Institutions of Higher Learning on Oct. 29, 2015 to succeed Dr. Dan Jones and took office Jan. 1, 2016. 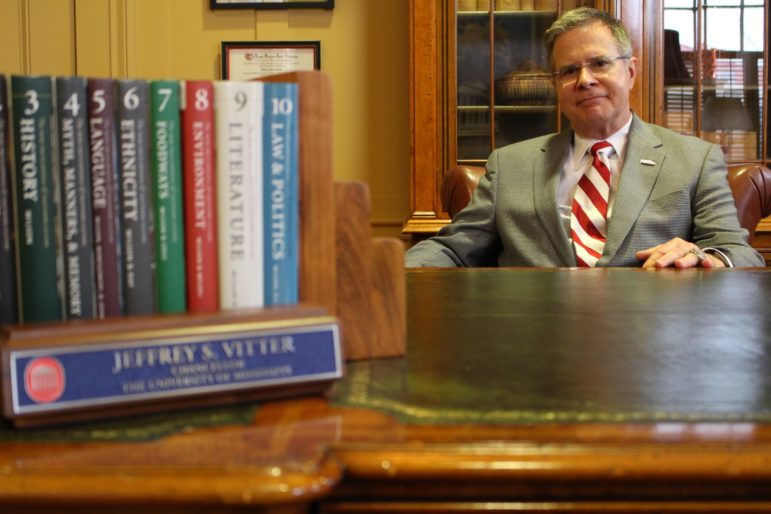 The University of Mississippi’s 17th chancellor, Dr. Jeffrey S. Vitter, in his office in the Lyceum.

“Having grown up in New Orleans, I’ve always  known that this university has a rich story and is very well known in a variety of areas in Southern culture,” says Vitter.

But he knew that he didn’t know everything, so he used the Flagship Forums to “listen and learn,” he says.

“We talked as a community about how we can become even greater … and what things are so great that we cannot change because it is crucial to the identity of the university,” says Vitter.

During that time, many people expressed their concern about an over-populated campus. Last fall semester, the university population increased 1.7 percent to 24,250, including those enrolled on the Oxford campus, the 2,990 students at the University Medical Center in Jackson and approximately 1,500 on four regional campuses. That is the 22nd consecutive year the University of Mississippi’s enrollment has increased. Over the past decade, enrollment has grown 40.5%.

“People want to maintain that small university atmosphere where people know one another and can interact closely,” says Vitter. “We aren’t trying to grow significantly.”

The University of Mississippi family likes the current feel of its surroundings, he says, but, “the two areas we must grow in are graduate and international studies.”

“We have grown in undergraduate education but not graduate. That’s important to reinforce our Carnegie status as a top tier institution, because there are national opportunities where that graduate training is needed,” says Vitter.

Vitter would like to see students better prepared to study abroad and simultaneously have more international presence on campus.

“Its a mutual benefit of bringing global perspective to our campus and a good financial source of stability,” he says. “Those students bring extra income to support activities on campus.”

Dr. Brice Noonan, biology professor at the University of Mississippi

Dr. Brice Noonan, biology professor and chairman of the university’s faculty senate, says Vitter early on made clear his dedication to addressing the needs of the faculty and all university community members.

“Through direct interaction he quickly learned the strengths of our diverse faculty, as well as the many challenges we face,” Noonan says.

A challenge facing all public universities in Mississippi is the state’s continuing reduction in general funds appropriations for public institutions for higher learning.

“There is a danger,” says Vitter. “We rely on state funds for the very basics of providing that education, but we are moving forward with our programs.”

“We look to other sources like philanthropy and donors to provide for programs that separate us from other intuitions,” says Vitter.

Programs such as the Sally McDonnell Barksdale Honors College, Trent Lott leadership Institute and the Croft Institute for International Studies thrive on the contributions of private donors. And Vitter is optimistic about future programming.

Last fall, Vitter brought 18 CEOs of major technology initiatives to campus to discuss how the university can lead nationally in science, technology, engineering and mathematics (STEM).

Construction of the STEM building on campus that will allow faculty members to teach disciplines in the settings they demand.

“Over the past year, he has proven an open and communicative leader through his constant engagement with the faculty and the faculty senate in particular,” says Noonan. “The recently unveiled Flagship Constellation Initiative is a clear demonstration of his commitment to finding innovative ways to strengthen and support the faculty of Ole Miss.” 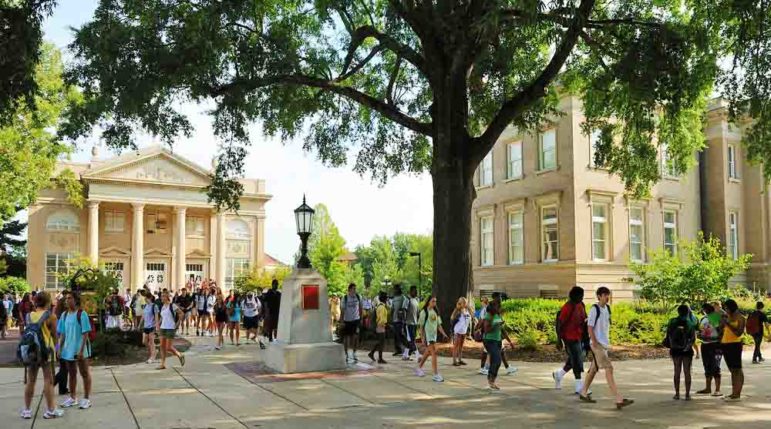 Introduced in Vitter’s investiture address last fall, the Flagship Constellation Initiative is the open and shared responsibility of university faculty and staff to recruit and retain a diverse group of faculty to enhance the university’s leadership in resolving some of the nation and world’s large issues. The goals of the initiative are:

• Encourage the growth of cross-disciplinary research and creative achievement communities at UM to solve key, grand challenges where UM can play a leadership role;

• Recruit and retain top talent at UM in faculty, staff, and graduate students;

For example, explains Noonan, faculty within the medical school may create proposals in pharmacy and products that could cure diseases and recommend the hiring of researchers to do so.

Vitter’s immediate predecessors, chancellors Dan Jones and Robert Khayat, were popular on campus and among alumni. Khayat, a former student at the university and professor in the law school, led the university from 1995 to 2009. Before succeeding Khayat, Jones was the vice chancellor for health affairs, dean of the School of Medicine and Herbert G. Langford Professor of Medicine at the University of Mississippi Medical Center. The College Board’s decision in 2015 not to renew Jones’ contract sparked protests on campus and angry calls from alumni and supporters for the board to reconsider. Jones ultimately refused a contract extension he deemed unacceptable.

Khayat recalls as chancellor waking up every morning at 4:58 and beginning his daily duties by signing personal letters to constituents of the university and its supporters. Today, students, alumni and supporters are more likely to receive an email from Chancellor Vitter or engage on social media. He is well tuned to the digital age. That has sped his introduction to the Ole Miss family. 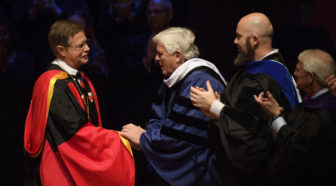 During his investiture as the 17th chancellor of the University of Mississippi Nov. 10, 2016, Dr. Jeffrey Vitter shakes hands with former Chancellor Robert Khayat.

“He’s all over that cell phone. He has done a better job staying in touch with more people interested in Ole Miss than any chancellor I have ever seen,” says Khayat.

“When you have over 24,000 students, not to mention faculty and staff, you can’t interact with everyone on a daily basis,” says Vitter. “But transparency is important and I use Twitter and Facebook as an opportunity to reach out and connect with UM family.”

Associated Student Body President Austin Powell says, “I have watched Dr. Vitter’s passion for getting to know and truly understand his environment drive his interactions with students, faculty, and staff.”

“He entered the position with tact and dedication, and he remains to have the same eagerness to engage with the student body,” Powell said.

David Sansing, professor emeritus of history at Ole Miss, says the ongoing advancements of the university climaxed under Vitter’s chancellorship. Sansing is the author of Making Haste Slowly: The Troubled History of Higher Education in Mississippi, The University of Mississippi A Sesquicentennial History and most recently Mississippi Governors: Soldiers, Statesmen, Scholars, Scalawags.

“Khayat began to modify Mississippi and its images. It was a hard and tough process, but Vitter took that progress and continued to lead the efforts to make life better for African Americans, Latinos, Mexicans, Hispanics, everyone at Ole Miss,” says Sansing.

Khayat agrees. “Dr. Jones continued that and added to it, and Dr. Vitter is doing the same thing. I love Dr. Vitter’s new ideas and new approaches. The momentum is growing … and it’s rewarding.”

Vitter returns the compliments: “We have been very fortunate to have some tremendous leadership at the university. It’s an honor to continue that tradition.”

“We are never afraid to examine the past and learn from it so that we can be leaders and shed the light for our whole nation going forward.”