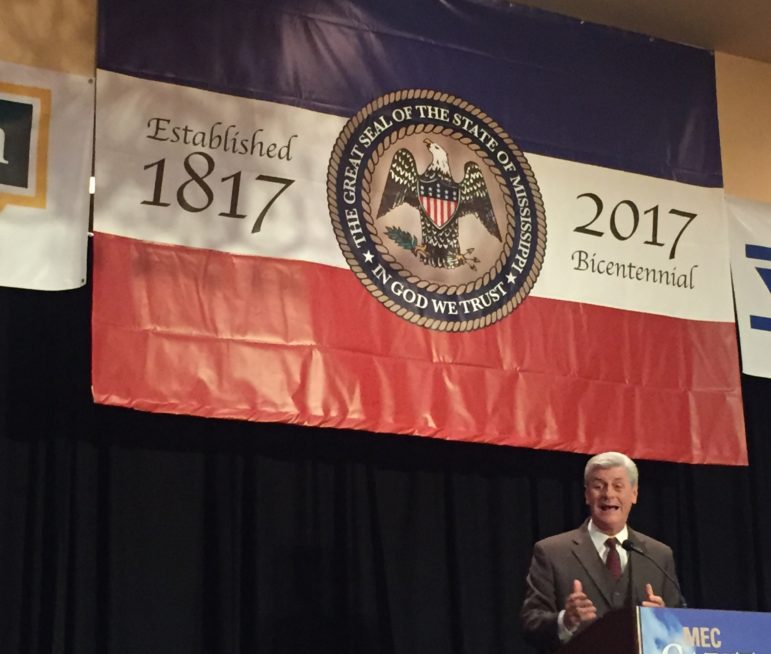 His comments came in kickoff remarks to The Mississippi Economic Council, the state’s chamber of commerce, as it held its annual Capital Day.

“Change is on the way, and it’s a dramatic opportunity for us,” said Bryant, a vocal surrogate for Trump during the presidential campaign. “I want to invite (Trump nominee for Secretary of Transportation) Elaine Chao to come to Mississippi and meet with MEC and let them know what our ideas and concerns are and how the federal government can work with us.

“I think we’re going to see less regulation so that when we’re moving forward, we can move forward with a sense of urgency, not dread and concern that any move we make, a federal organization like (Environmental Protection Agency) will come down and say stop immediately,” Bryant predicted.

A top concern for state business leaders for years has been improving Mississippi’s infrastructure to lure business. Their argument has been that attracting and retaining companies is made more difficult with current “crumbling” roads and bridges.

Last year, MEC with the support of its corporate members, pushed a $375 million initiative that would have provided funding to the Mississippi Department of Transportation for road and bridge improvements.

The initiative would have funded replacing 138 bridges across the state, including all wood bridges, and paving projects for Mississippi Department of Transportation across the state.

Business leaders such as Joe Sanderson, chief executive of Sanderson Farms, have focused on infrastructure improvements, claiming Mississippi “is losing its competitive edge” because of “crumbling” roads and bridges.

The majority of the MEC initiative’s funding would have come from a gas tax increase, but legislative leaders including Lt. Gov. Tate Reeves and Speaker of the House Philip Gunn, R-Clinton, have generally stood against such tax increases.

Despite interest from business leaders and some lawmakers in boosting funding for infrastructure, the proposal did not receive serious consideration in either legislative chamber last session.

Bryant said he recently spoke with Trump about infrastructure.

“I heard him say it, and he’ll say it again or tweet it,” Bryant said. “He’s talked about improving infrastructure in the United States, and Mississippi can lead the way. We can help you lead the way and states in national infrastructure program. There’s a possibility of him working with governors across the nation, so we will have a plan that’s in sync with one another.”

Bryant also cited a 2016 MEC report that portrays job growth and about $300 million of tax revenue directly from the Canton Nissan plant’s operations and growth.

“What’s the number we’re looking at for infrastructure support we need? About $300 million,” Bryant said. “We get one more Nissan, problem solved. It is a problem. The House and Senate understand this is a job that needs doing.”

Bryant also hailed a decline in the number of Mississippians applying for Supplemental Nutrition Assistance Program (SNAP), noting that 80,000 fewer Mississippians are seeking the food stamp benefits this year.

Bryant noted that the state had applied stricter requirements for seeking SNAP benefits: “One, look for a job. Go apply for a job. If you don’t know how to properly fulfill that job, go to workforce training programs. If not, go to one of our fine community colleges. If you can’t do either of those, spend 20 hours volunteering for a nonprofit. Do any of those, then you get food stamps.” 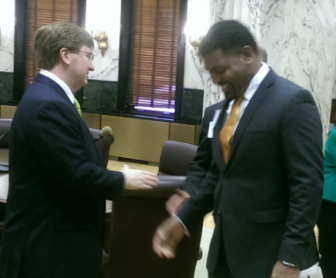 The state’s top legislative leaders echoed Bryant in later comments to the business group at the Capitol.

Lt. Gov. Reeves touted the business climate that he believes Republicans have helped create in the past five years. Specifically, he pointed to the elimination of the corporate franchise tax by 2028. Reeves also said that state government is more efficient as evidenced by Republican-led efforts to consolidate school districts, from 152 to 139.

Gunn said that while wide agreement exists to invest in infrastructure there is not yet consensus on how to fund upgrades. Gunn said a major infrastructure package would require 74 votes to pass.

“No one has come to me and said I have 74 votes,” for an infrastructure plan, Gunn said.

“Let’s consider this in light of the current political climate,” Gunn said. “The people of this state have continued to elect conservatives, primarily Republicans, in vast numbers. We’ve actually seen the numbers of Republicans increase with every election, to the point that Republicans now have a supermajority in the Mississippi House of Representatives. There has been a consistent march toward conservative government and leadership.”

Most of those Republicans run on living within a budget, no tax increases and eliminating debt, among other issues, he noted.

“So when the only plans on infrastructure presented involve tax or fee increases, you can see why it is a heavy lift to move in that direction,” Gunn said. “It is difficult to get a coalition to vote together on things like that.”

Sen. Willie Simmons, D-Cleveland, chairman of the Senate Transportation Committee, said local governments will have to meet the state part of the way on funding road improvements, saying of counties and municipalities: “They need some skin in the game too.”

Scott Waller, MEC’s chief operating officer, said representatives from boards of supervisors and the Mississippi Municipal League served on the task force that examined infrastructure needs. Waller said they are receptive to hearing what kind of role they can play in transportation funding support.

“There are always going to be some minor differences in how they think (about) these things — and that’s OK. We’ll work that out in the process. What we want to do is get the process started,” Waller told Mississippi Today.