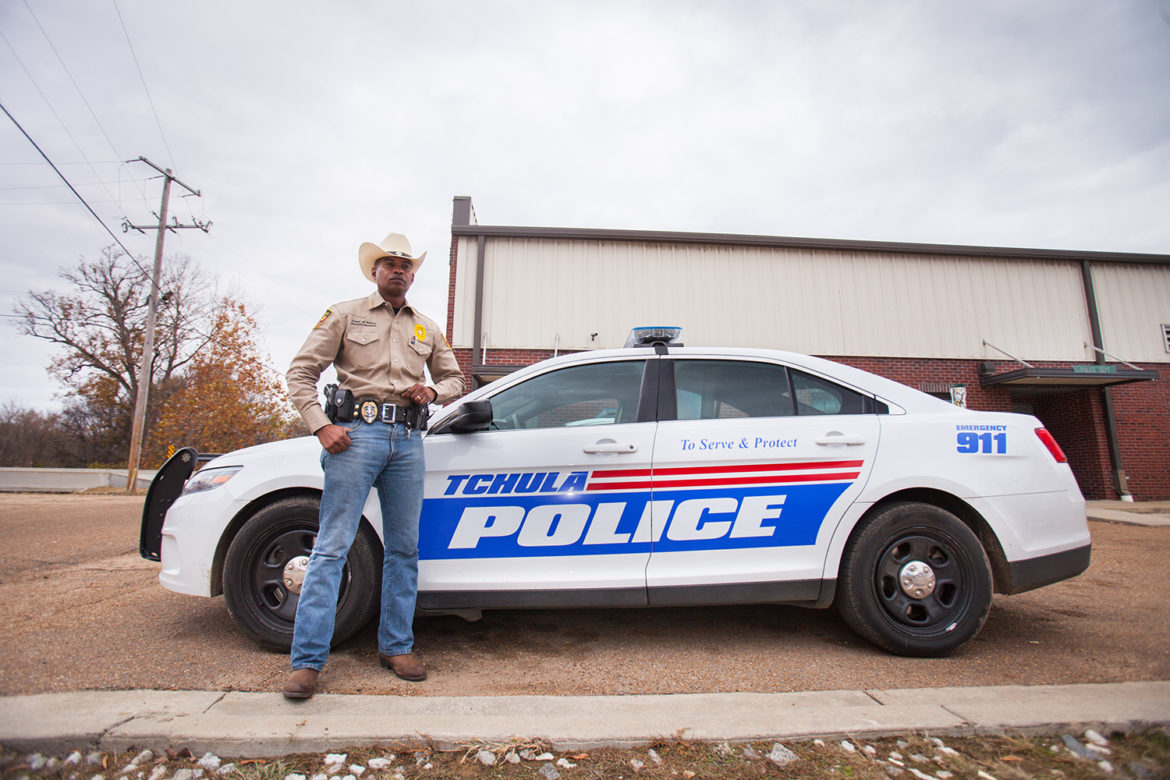 Kenneth Hampton’s reputation for no-nonsense police work began just inside the Tchula city limits on two-lane Highway 12, when a motorist pulled a U-turn to avoid his police checkpoint.

The driver, Earl Anderson, led Hampton and his fellow officers on a chase up the bluff and through the hills east of town, eventually dead-ending at a deer camp in the woods. Hampton fired 12 rounds into Anderson’s vehicle as he attempted to run over the officers. 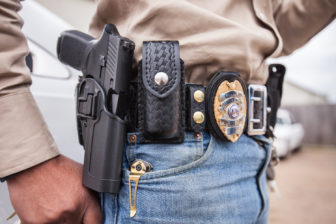 “The only reason it ain’t 13 is because I ejected a round that was already in the chamber, because I wasn’t sure if it had been chambered,” Hampton says.

Anderson was booked with aggravated assault on a police officer, among other charges, and the Mississippi Bureau of Investigation cleared Hampton of wrongdoing in the case. Hampton, barely a rookie, had made his stand.

That was the moment things began to change in Tchula, an impoverished town of 2,332 on the edge of the Mississippi Delta. 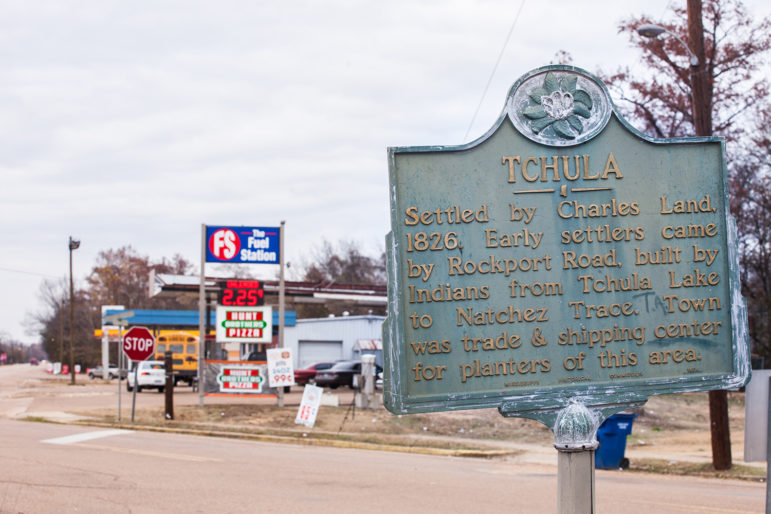 The small Delta town of Tchula

Hampton’s brashness draws comparisons to Buford Pusser, the Tennessee lawman portrayed in the 1973 movie Walking Tall. Pusser became famous for busting moonshine stills and holding ground against the Dixie Mafia who ran them. Hampton keeps a “Buford stick” that was given to him by a fan of his colorful Facebook posts, although he’s had only one opportunity to pay tribute. 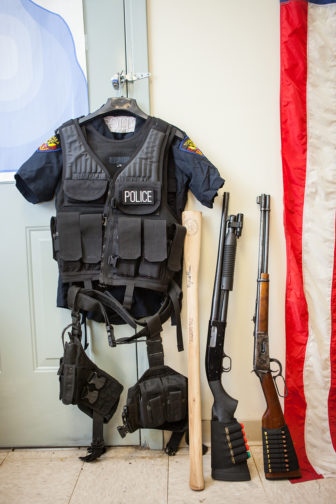 “I imagine they were upset,” Hampton laughed, recalling an incident with his town’s habitual open-container violators. “Some of the liquor bottles were pretty full. It was early in the morning, so I guess I messed up their breakfast.”

Hampton is used to dealing with difficult people and circumstances. Back in the early ’90s, he helped his father, Ollie Hampton, at his Hot City nightclub in Yazoo City. When the elder Hampton wanted to get out of the business in 1996, the future lawman took it over.

He left to join the United States Marine Corps in 1999, working in maintenance on Humvees and trucks, training to be a drill instructor and working in counterintelligence, while serving overseas in places such as Japan. He authored a book, The Killing Man’s Son: The Birth of an Assassin, about a Marine sent to the Philippines, loosely based on his own experiences. When he returned to Yazoo City after 14 years, he reopened the club but quickly realized his mistake. 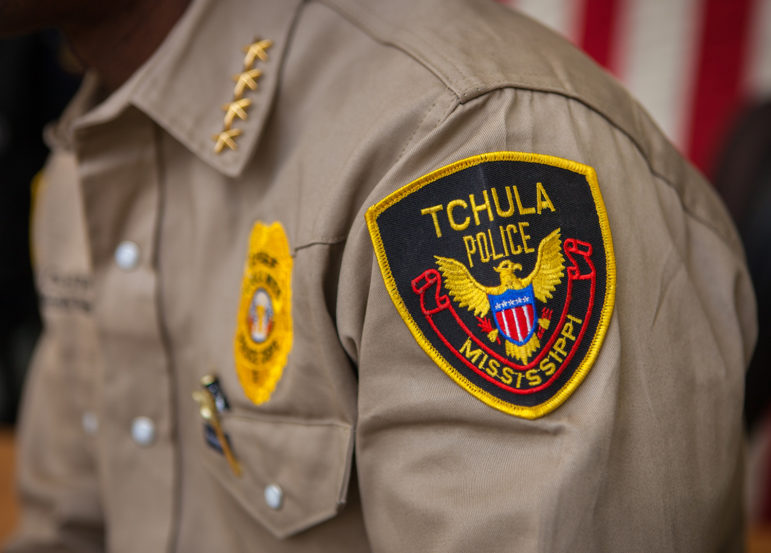 “After about two months, I was sitting in there and thought, ‘You know what, this isn’t me,’” he said. “I found out I was an adrenaline junkie, and it just wasn’t doing it for me.”

Hampton rode his motorcycle for two days, pondering his next move. He came home and applied for police officer positions in Jackson, Yazoo City and Tchula, which called him first. He took the job, using his G.I. bill to pay for training at the police academy, and started patrolling the 1.4-square-mile town under the direction of chief Anthony Jones. 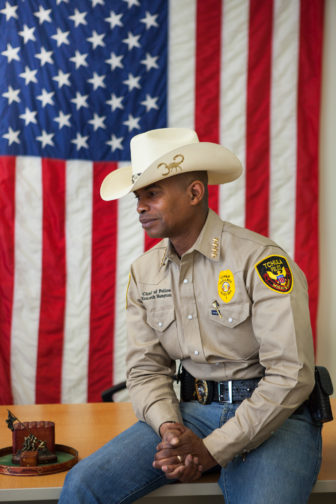 A little more than two months after the Earl Anderson incident, on Halloween night 2014, Jones died in a fiery crash on Highway 49 south of town that also ended two other lives. Hampton and Jones didn’t always agree — the chief advised him to tone down his tactics on more than one occasion — but there was mutual respect between the lawmen. Today, Hampton keeps Jones’ charred badge in his desk drawer.

Hampton’s no-holds-barred law enforcement style, instituted with zeal after he took over as police chief, has grown into mythical feats of strength and cunning — some earned, most embellished. Posts on his New Southern Justice Facebook page that call out alleged criminals, sometimes with pictures, regularly garner hundreds of likes, shares and comments from supporters. The Tchula Police Department Facebook page, where the chief shares all of his New Southern Justice posts, has more than 24,000 page likes.

“Your arrest is public information,” he said. “Of course, I’m not going to do anything to jeopardize my job or the city. This is the way I eat. [But] once that warrant is signed, you’re all mine. I’m gonna’ have some fun.” 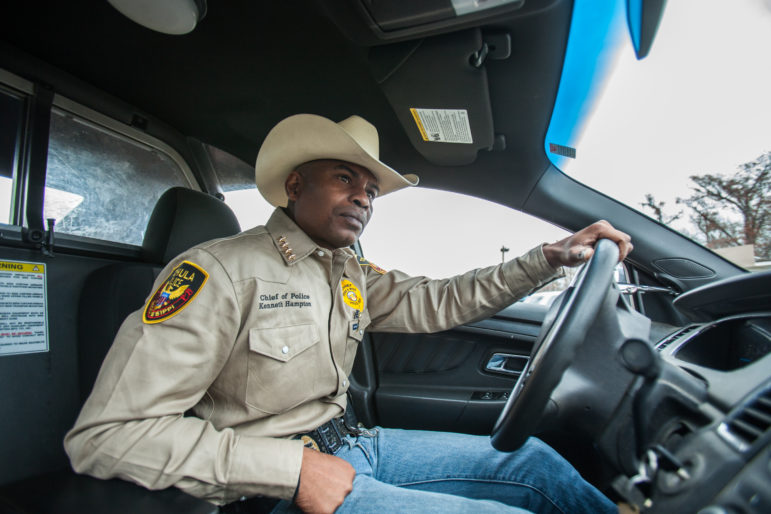 Police Chief Kenneth Hampton patrols the city of Tchula, where he has taken a no-holds-barred approach to law enforcement.

Hampton contends that he’s no angel, and he doesn’t pretend to be perfect in his popular social-media posts. Because of his past, he also understands what drives mistrust of some police officers.

Back in his nightclub days, not long after an officer allegedly tried to extort a bribe from him, an unmarked Yazoo City police cruiser lit him up at Little Yazoo, about seven miles south of the city limits. According to Hampton, the police had received a tip that someone driving a Ford Mustang would be bringing a shipment of drugs into the city. 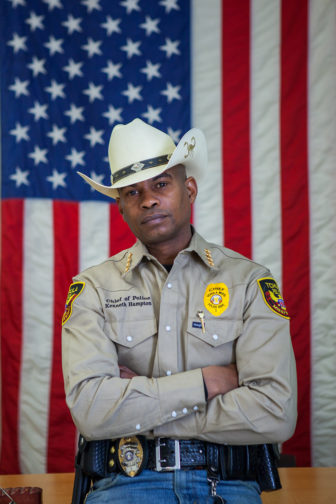 Kenneth Hampton’s law enforcement style has grown into mythical feats of strength and cunning — some earned, most embellished.

Clearly, he thought, the officer was outside his jurisdiction. And, with his experience a few days earlier still fresh in his mind, he stomped the accelerator in his ’72 Mustang Grande and aimed for the first shopping center inside the city limits, where at least he would be under lights where potential witnesses could see the inevitable interaction.

“It looked like everybody that was in a police car was coming out there,” he said. “They were all up my side of the highway. We were playing chicken with each other and all kind of stuff. I slowed down to make the turn, and [one officer] decides to shoot past me, slow down and slam on the brakes.”

The hood of Hampton’s prized Mustang buckled in the crash, he said, but charges related to the run were dismissed because of the officers’ attempt to make a stop outside the city limits and subsequent mistakes.

These days, Hampton still loves a good chase. During his investigation into the death of double-amputee Clarence Blue — officially ruled a heart attack, although it was preceded by an attack from multiple assailants — he tracked one suspect to Waterloo, Iowa.

But foot chases are his favorite.

“I’m 43-0 on foot,” he said. “It hurts me sometimes, but I can’t find it in myself to give up. I get a little creative — I might pick up a rock, I’ve thrown handcuffs at people. Whatever it takes, as long as it’s within the law, I’ll do it.” 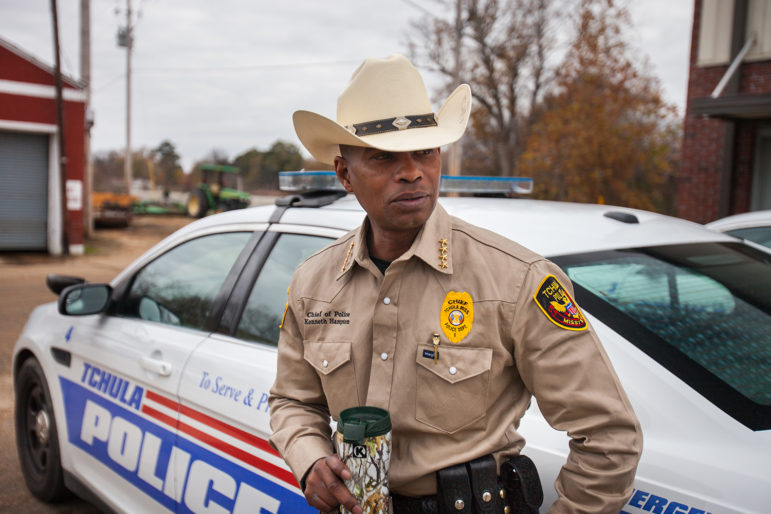 Hampton hopes that his tactics will re-instill the rule of law in Tchula, and lead to more jobs and opportunities for its citizens.

“Holmes County is one of the poorest counties in Mississippi,” he noted. “If you have decent law enforcement, the crime rate goes down and it becomes a decent place to live. I think companies and stores would be willing to take a chance on putting a business here.”

Since he has been chief, he estimates, crime has gone down between 60 and 70 percent. Burglaries have mostly ceased, and on a drive through the city on a cold December day, Hampton points out that drug activity has either decreased or gone indoors for the moment. He’s looking ahead to addressing those challenges in 2017.

As Hampton crossed Main Street on his way back to headquarters, a freelance photographer in tow, a woman leaned out of a worn-looking SUV at the intersection with Front Street.

“I wanna’ be on camera!” she shouted at him, before slamming the door shut and crossing the Tchula Lake bridge.

Chief Hampton laughed as she drove away.

“She’ll be on camera soon enough.” 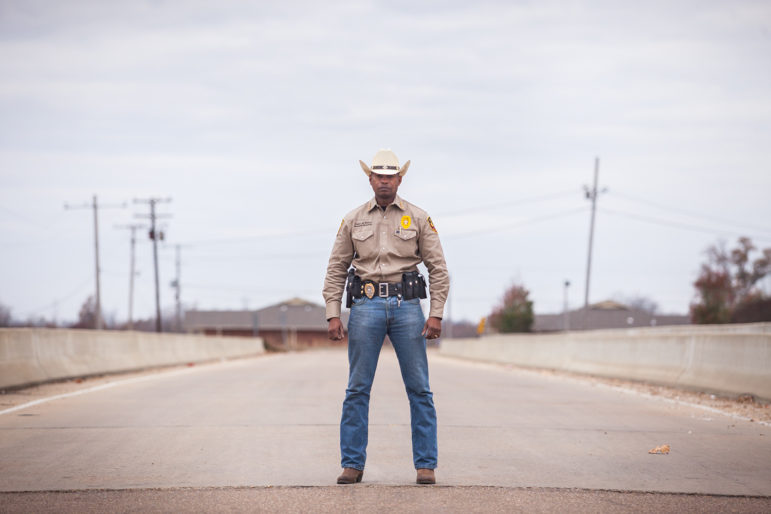 “Walking Tall in Tchula” by Rex Jones (from MississippiStories.org)