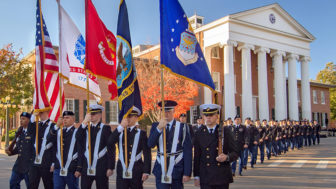 Members of UM Army ROTC Program marched past the Lyceum during the Pass in Review ceremony Thursday.

The annual Pass in Review ceremony on the Circle in front of the Lyceum Building included a keynote address to the cadets from Vitter, who became chancellor in January, according to an Ole Miss press release.

“It is an honor to be standing here today amongst a group of heroes, our students who have put aside their personal interest for the sake of serving something larger than themselves,” Vitter said. “The University of Mississippi and our ROTC programs have a long and proud heritage of service to our university, state and nation. I applaud you – cadets and midshipmen – for upholding that proud legacy.”

Vitter also thanked all veterans present who answered the nation’s call in a time of need.

A military Pass in Review is primarily used during change-of-command ceremonies, formal events bringing together large formations of troops and parades, Lt. Col. E. Scott Walton, UM chair and professor of military science and education, said in the press release.

The formation marched past a reviewing stand where VIPs and the senior officer or dignitary were seated.

According to the university’s press release:

• Army ROTC has commissioned 1,740 officers since its inception at Ole Miss in 1936. The Army ROTC program has 80 Hall of Fame inductees, including 15 general officers. Other key alumni include 2nd Lt. and 2016 Olympics bronze medalist Sam Kendricks  and U.S. Congressman Trent Kelly (R-Miss.).