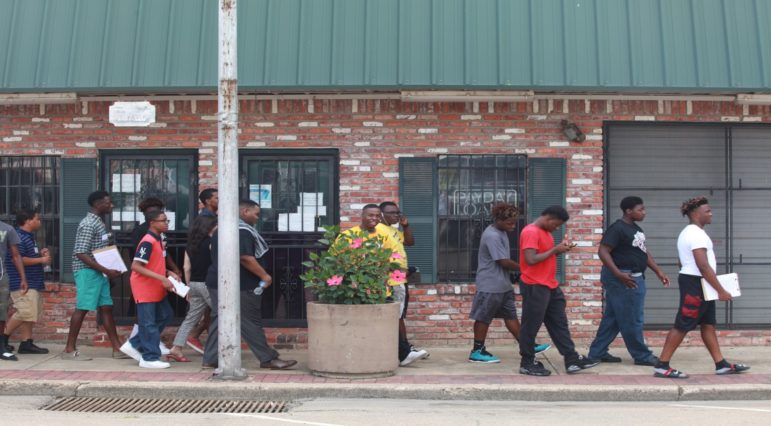 Participants in the Sunflower County Systems Change Project embark on an interviewing exercise in downtown Indianola.

INDIANOLA —  Spurred by rhythmic beats on the table, beat-boxing and the synchronized head nodding of seven male teenagers, Vonkerius Jackson took his turn to freestyle rap.

They broke up in laughter and moved easily into a workshop about self-expression conducted by the Peace Poets of New York. The poets are one of the many groups partnering with Sunflower County Systems Change Project, launched this summer to address school discipline, juvenile justice and the negative profiling of young men in the Delta county.

This inaugural project partnered by four groups — the American Civil Liberties Union of Mississippi, the Mississippi Center for Justice, Sunflower County Consolidated School District and the Sunflower Consolidated School District P-16 Council  —  is part of a larger effort funded by a two-year, $1 million grant from the W.K. Kellogg Foundation to address excessive discipline in schools and disparate punishment of young men of color.

The ACLU of Mississippi administers the funds and gives the Mississippi Center for Justice, a non-profit firm staffed with lawyers and other professionals who strive to combat discrimination and poverty, a portion of those dollars to carry out missions specific to Sunflower County. A percentage was also given to the Sunflower school district to hire a discipline coordinator.

“In order to change the outcome we have to change the system,” said Aisha Carson, advocacy coordinator for the ACLU. “A huge chunk of that system is the school. Addressing school discipline (in Sunflower County) focuses on making sure kids don’t spend that time away from school.”

In 2015, there were 162 Youth Court referrals in Sunflower County, reports the Mississippi Department of Human Services, Division of Youth. Ninety-five of those referrals were black males between the ages of 15 and 17 for disorderly conduct. Of those cases, 12 students were admitted to the Oakley Youth Development Center. Sunflower and Forrest counties had the second largest number of students admitted, and Harrison County had the largest number with 22 students. The center, located in rural Hinds County, serves boys and girls ages 10 to 17 who are adjudicated as delinquent by the Youth Court.

Generally, referrals are made by parents and school authorities who want law enforcement and city counselors to intervene in the discipline of a child to prevent further trouble, explained Kathy McClain, representative of the Sunflower County Youth Court.

The ACLU estimates that nationally young black males are three times more likely to be subjected to school discipline and referred to the Youth Court system than males in other demographic groups. Repeated contact with the juvenile justice system increases an adolescent’s risk of falling into the schoolhouse to jailhouse pipeline, one issue the Sunflower County Systems Change Project is working to resolve. 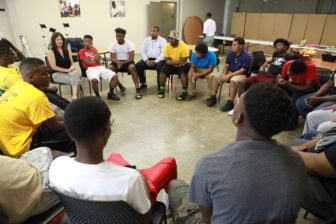 In June, Story For All Executive Director, Angela Zusman sat with the R.O.O.T.S. of Sunflower County in Indianola to discuss the advantage of digital storytelling with a purpose of social change.

The young men participating in the project call their group “The R.O.O.T.S. of Sunflower County,” R.O.O.T.S. being an acronym for “reclaiming our origins through stories.”

Fourteen students in R.O.O.T.S. are enrolled at Gentry High School, and the remaining five attend Ruleville, the only other high school in the recently consolidated district.

“A lot of times, many students get left out (when districts are consolidated),” said Carson. “They miss out on certain programs and resources that they could benefit from.”

The 19 chosen for the yearlong Sunflower project completed an application and interview process, and if they meet attendance requirements, they will receive stipends every nine weeks totaling $600 dollars each.

The educational program is designed to build basic concepts of self-discipline, self-worth, personal responsibility, attention to detail, a sense of urgency and respect for constituted authority. 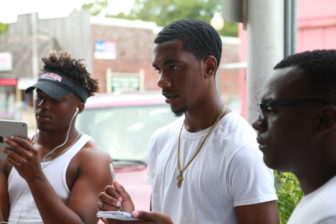 The ACLU of Mississippi and Mississippi Center for Justice staff also have engaged organizations from across the nation that have similar goals to improve the outlook and outcomes for young black males.

In June, the Sunflower project partnered with Story For All, an Oakland, Calif., organization whose goal is to document stories in a way that will preserve, share and promote dialogue around social change.

During a week-long camp, the young men received professional instruction in video, photography, interviewing and oral history. Story For All executive director Angela Zusman also created a yearlong curriculum for the Sunflower coordinators to continue to merge into the weekly activities with the R.O.O.T.S. as they tell stories outside of their group.

“First, we want to have an oral history archive from the interviews they’ve done, and two, we want to create this space for narrative change by making sure what the boys are doing is very visible in the community and around Mississippi,” said Carson.

The completed oral history archive will be available at the B.B. King Museum in Indianola in summer 2017.

Last month, the project partnered with the Peace Poets from Bronx, N.Y., five artists, educators and public activists who examine and advocate for life through music and poetry.

“The Peace Poets have a unique way of creating a space where young men can be authentic, comfortable and vulnerable at the same time. Unapologetic about their own personal experience. I have never seen that,” said Jacorius Liner, advocacy coordinator the Mississippi Center for Justice. 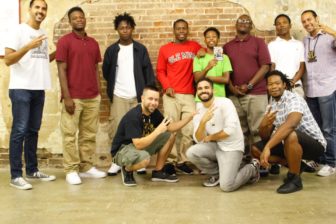 Peace Poets pictured with members of the R.O.O.T.S. of Sunflower County after their writing workshop

“We’ve seen arts in the form of music, artistic expression and theater be eliminated. So the Peace Poets come in and teach them how to channel their thoughts and feelings in a positive outlet that allows for expression and growth in a way they don’t get in school,” Smith says.

The poets began the workshop sharing their own poems about violence and poverty but also love and culture growing up in the Bronx. Then they gave the group the opening line, “what they don’t know,” and asked them to continue with their own poems.

“Be intentional with what you write. We use that as a first step to engage in community change. Our philosophy is, your personal is political,” said Abraham Velazquez, a member of the Peace Poets. “If we can’t see young people as the folks to replace us one day, how are we working in love to build them?”

Rejoining in a seated circle, the young men read aloud their personal experiences with depression, teenage pregnancies, discrimination, broken homes and violence. Once the last person spoke, they stood up and locked arms.

Velazquez asked the group, “How do you feel?” Many of them responded “Good. Powerful.”

“That right there helped many of us get the pressure out of our system,” said Johnny Earl Phillips Jr., a 12th grader at Gentry High School.

“It was scary at first, but just like they say, a closed mouth don’t get fed,” said Calvin Griffin, an 11th grader at Gentry. “If you don’t share your opinion you won’t be heard. You never know who can hear it.”

As a part of the ACLU of Mississippi and Mississippi Center for Justice partnership, the second annual Schoolhouse Rights Rock was held in late August at Mississippi Valley State University. 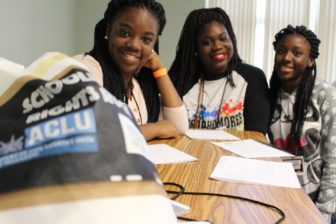 An estimated 300 middle and high school students from Sunflower County Consolidated School District and Greenville Public School District, parents and advocates attended workshops about restraint and seclusion in schools, encounters with law enforcement, schoolhouse rights and civil rights, and creative activities with the Peace Poets and the Theatre of the Oppressed NYC.

“We bring the actors and audience together. We all have a stake. Recognizing that in a theatrical way brings about change,” said Moon Lowery, a member of the theater group.

“It’s never their responsibility alone, the students, the systems or the institutions,” said  Sophie Nimmannit, program and operations director for the Theatre of the Oppressed.

Responding to a parent’s concern about conditions in the school district, Sunflower County Systems Change Project advisory council member Betty Petty said, “At the end of the day, if that child is not getting what he or she needs, it is not only the school that has failed, we all have failed. We as parents need to know our rights as well as students.”

The middle school students from Sunflower County created a presentation called “Our Needs, Our Rights.”

They listed all the things they feel entitled to: “Free education, to be yourself, equal opportunity for jobs, the freedom of speech, the right to wear what we want, and respect.”

Changing the narrative of young black males in the Delta