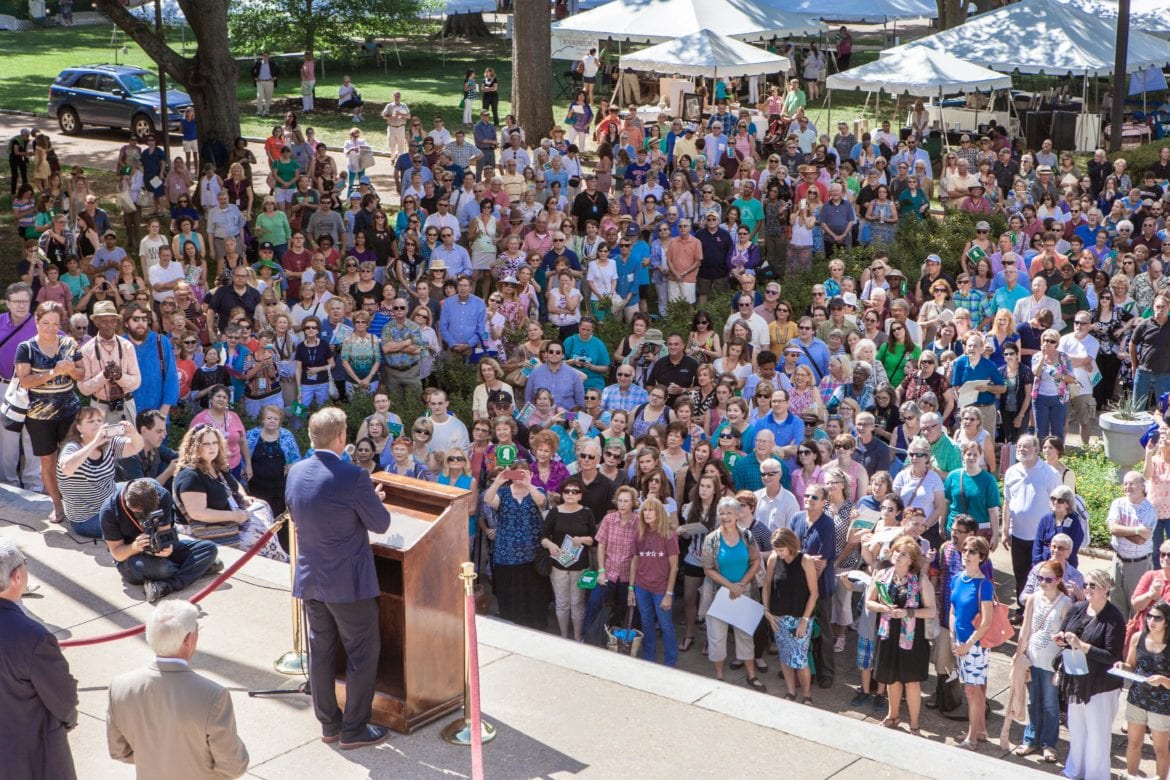 John Grisham addresses the crowd at the opening ceremony of the inaugural Mississippi Book Festival in 2015.

When thousands of people converge on a state capitol these days, it’s often to protest a government action or inaction on a hot-button issue. It’s not hard to imagine, then, state leaders’ delight when the first Mississippi Book Festival drew more than 3,500 people to celebrate the state’s literary legacy at the Mississippi State Capitol last August.

Holly Lange, organizer for the Mississippi Book Festival, speaks at the inaugural event in 2015.

“Gov. Bryant turned to me and said, ‘Well, Holly, we’re going to have to build you a bigger building,’” laughed Holly Lange, executive director of the Mississippi Book Festival. “He had never seen that many people in the State Capitol, and it was a selling point with us to the leadership.”

This Saturday, the Mississippi Book Festival returns to the State Capitol complex for its second year with a new slate of authors and writers, along with big hopes to exceed last year’s mark and reach 5,000 attendees. 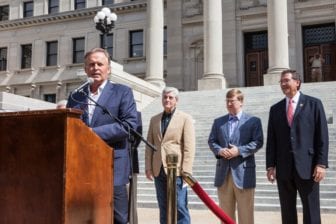 The Mississippi State Capitol and lawn, as well as the adjacent Galloway United Methodist Church and The Foundry at Galloway, will host the festival from 9 a.m. to 6:30 p.m. A lineup of 32 panel discussions featuring 150 authors will cover dozens of topics, ranging from historical fiction and civil rights to Southern culture, sports, memoirs and young adult literature. 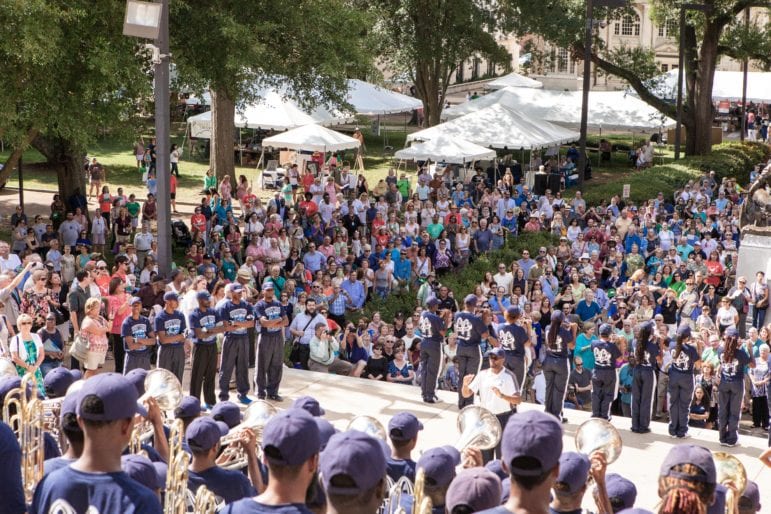 Underpinning the festival is a theme of how writers convey the experience of living in Mississippi to readers and the mythology that writers and readers alike build around the state. The closing session deals with this Mississippi experience — why people write about it, why people want to read about it and why people love it, according to Lange. 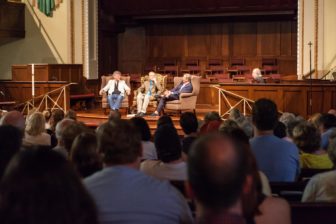 “These writers who can express what it’s like to live or grow up in Mississippi and have a Mississippi experience give the world an inside peek at what we’re really like,” explained Lange.

“I think a lot of people have pre-determined ideas of Mississippians and life in Mississippi, and any time an author successfully writes about their experience in Mississippi, sometimes humorous and sometimes in a very serious way, that’s another opportunity to say, ‘This is what we’re really like on the inside.'”

Syndicated columnist Rheta Grimsley Johnson, whose Tishomingo County dateline famously reads, “Fish Trap Hollow, Miss.,” is one of the panelists for that closing session. Although not a native Mississippian, Johnson grew up in the South and has lived in every part of the state while reporting for The Commercial Appeal, Scripps Howard News Service and King Features Syndicate.

“I think Hollywood has made outsiders see [Mississippi] as one big live oak-lined driveway going up to the big house where big daddy’s on the porch,” said Johnson. “But it’s nothing like that in reality.”

More than any other place she’s lived, Johnson said, she feels at home in Mississippi. When she took a job at the Atlanta Journal Constitution several years ago, the column announcing her arrival erroneously reported that the Georgia native grew up on a farm in Mississippi. Luckily, she had kept her secluded home in Fish Trap Hollow, knowing she would always return to her adopted home state.

“There’s still a possibility of space here,” said Johnson. “I know all the neighbors and I know their dogs. There’s something that’s still small about this place. Once I was in the airport in Jackson for 30 minutes, and I saw [both] Eudora Welty and Jerry Clower.”

Perhaps the biggest professional benefit to a writer is that Johnson has never been at a loss for subjects in Mississippi.

“I find the people here are the most unaffected people on earth, except for maybe Cajuns,” she said. “I’ve gotten a lot of material just moving around and existing in this neck of the woods.”

In addition to a literary event, the festival has also been a boon for the Capitol itself. Last year, guides gave more than 75 tours, and tours will begin every 30 minutes beginning at 11 a.m. this Saturday.

“It’s a huge opportunity for people to get to learn about the architecture and history of the Capitol,” said Lange. “That’s just another way we can show off a good thing about our state.” 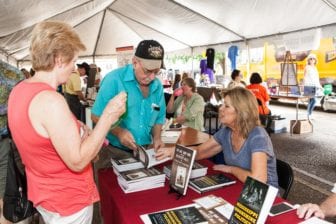 Attendees will also find more than 70 independently published authors and artists in Authors Alley. Other attractions include the Smithsonian Learning Lab, a Library of Congress exhibit and a 3D printer experience presented by the Mississippi Library Commission.

Kids and parents can celebrate the 75th birthday of Curious George from 10-10:30 a.m. at the Kids Corner tent along West Street, where children can meet the character, play games, hear stories and pick up a treat.

The Mississippi Book Festival is free and open to the public, and portions will be televised live on C-SPAN2 beginning at 10 a.m.

• Check out festival authors’ recommendations with Mississippians in mind 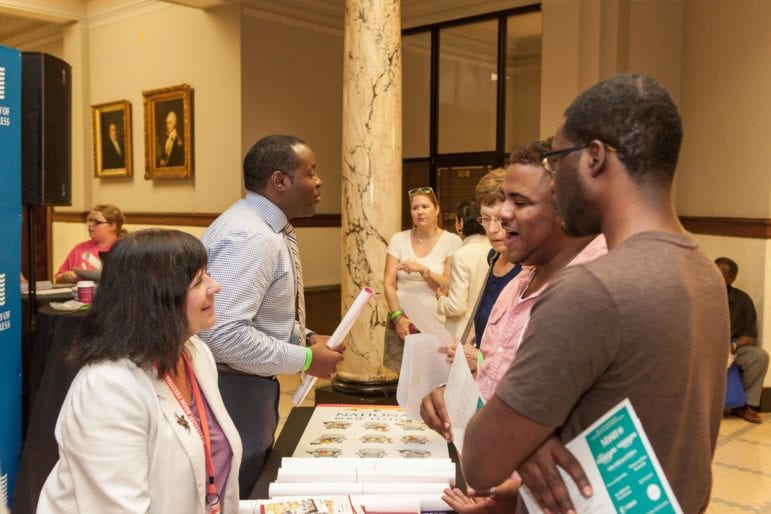 Patrons of the 2015 Mississippi Book Festival stop by the Library of Congress exhibit inside the Mississippi State Capitol.

Why write about Mississippi? Why read about it? Find out at book fest