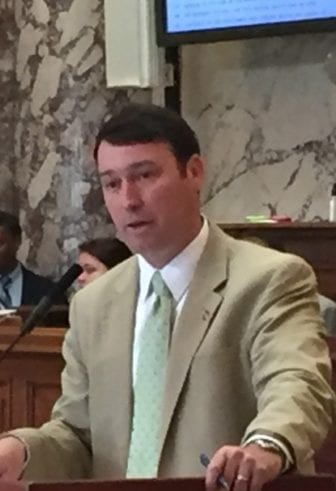 A group of Mississippi lawmakers is making moves to pass legislation that would intensify the penalties for those convicted of assaulting or murdering law enforcement officers.

State Sen. Philip Moran, R-Kiln, and Sen. Sean Tindell, R-Gulfport, announced on Wednesday they are drafting a bill seeking to do just that. The legal department in the Senate is working on it now, Moran said, and their intentions are to pre-file the bill ahead of the 2017 session, which begins in January.

The move comes on the heels of murders of police officers in Baton Rouge and Dallas following growing tension over shootings of black men by law enforcement officers.

“It would be a hate crime if it is specifically targeting law enforcement officers – that is by definition a hate crime, and one that should be provided tougher penalties and additional scrutiny,” Tindell said.

Under Mississippi’s current hate crime law, any felony or misdemeanor committed because of “the actual or perceived race, color, ancestry, ethnicity, religion, natural origin or gender” is subject to enhanced penalties.

Louisiana earlier this year passed a similar law expanding the state’s hate crime statute to cover law enforcement officers. It was the first to add police officers as a class protected under the law, The Washington Post reported.

Louisiana’s House Bill 953 amended state statute saying it is illegal for anyone to select a victim of a crime based on a list of characteristics, including race, age, sexual orientation or “because of actual or perceived membership or service in, or employment with, an organization, or because of actual or perceived employment as a law enforcement officer or firefighter …”

“What sparked it is the events that have taken place in the last few weeks – the outright murdering and attempted murders that have taken place on our law enforcement officials,” Moran said of the decision to move quickly on the bill. “There’s this feeling across America that is enough is enough and this has to stop. We’re certainly hoping this will at least shed some more light to it and get some folks’ attention.”

“I took a couple of days and looked into what it would entail. … It looks like this might be a good idea because for something less than murder like assault perpetrated against a police officer, it could double the penalties and serve as a deterrent,” Baria said.

Baria said he would be happy to support Moran’s bill if “it’s well drafted and does what is needed.”

Police officers could be protected class under hate crime law