In a opinion that cited scripture and Mississippi’s segregationist past, U.S. District Court Judge Carlton Reeves said House Bill 1523, signed by Gov. Phil Bryant in April, was another unfortunate example of Mississippi trying to write discrimination into its laws.

“Religious freedom was one of the building blocks of this great nation, and after the nation was torn apart, the guarantee of equal protection under law was used to stitch it back together. But HB 1523 does not honor that tradition of religion freedom, nor does it respect the equal dignity of all of Mississippi’s citizens,” Reeves wrote in his opinion.

For opponents of the law, Reeves’s ruling was a triumph over a bill that they believe used religion as a Trojan horse to sneak discrimination into state law.

“Our state legislature has no business passing a law that gives protections to one set of religious beliefs over another. When there is no separation of church and state, there is no freedom of religion,” Carol Burnett, a United Methodist minister in Biloxi and plaintiff in one of the lawsuits, said in a statement released after Judge Reeves’s opinion.

But supporters of House Bill 1523 are disheartened that a federal court has dealt a near-mortal blow to a law that they say is essential to protecting the First Amendment right to freedom of religion.

“I am disappointed in Judge Reeves’s ruling on House Bill 1523,”  Speaker of the House Philip Gunn, who was the author of the bill, said in a statement. “We felt like this was a good bill that focused on protecting religious beliefs, while also protecting the rights of the LGBT community.”

Both Gov. Phil Bryant and Lt. Gov. Tate Reeves, two of the bill’s most prominent advocates, said the state should stand by its law and appeal the ruling to the 5th U.S. Circuit Court of Appeals.

“The state’s attorneys should quickly appeal this outrageous ruling that undermines Mississippians’ freedom to practice their religious beliefs as guaranteed by the First Amendment,” Reeves said in a statement.

Bryant also issued a statement: “Like I said when I signed House Bill 1523, the law simply provides religious accommodations granted by many other states and federal law. I am disappointed Judge Reeves did not recognize that reality. I look forward to an aggressive appeal.”

Attorney General Jim Hood, the only Democrat holding statewide office, said he will appeal Reeves’s decision earlier this week saying circuit clerk’s cannot recuse themselves from issuing marriage licenses to gays because, as Hood noted, the clerks were never parties to the suit.

But Hood said he’s undecided about whether he will appeal the decision handed down Thursday night. He said he he has major reservations about the merits of the lawsuit — and the origins of the law.

“I can’t pick my clients, but I can speak for myself as a named defendant in this lawsuit. The fact is that the churchgoing public was duped into believing that HB 1523 protected religious freedoms,” Hood said in a statement.

“Our state leaders attempted to mislead pastors into believing that if this bill were not passed, they would have to preside over gay wedding ceremonies.  No court case has ever said a pastor did not have discretion to refuse to marry any couple for any reason.  I hate to see politicians continue to prey on people who pray, go to church, follow the law and help their fellow man.”

House Bill 1523 singles out three “sincerely held” religious beliefs as worthy of protection: that marriage is between one man and one woman; that people should not have sex outside such marriages; and that a person’s gender is set at birth. The law protects from litigation anyone who speaks out against gay marriage or transgender individuals because of these beliefs.

It was the second time Reeves ruled against HB 1523 this week. In a separate decision Monday, Reeves indicated that he would invalidate the part that allowed clerks to recuse themselves from issuing marriage licenses to same-sex couples. But that ruling didn’t address any other aspects of the law, which was set to go into effect July 1. Private business owners, such as caterers, and other state officials, such as public school counselors, were still allowed to refuse marriage-related services to gay, lesbian and transgender Mississippians.

Thursday’s ruling, however, invalidates every facet of House Bill 1523. The two lawsuits it addresses, Barber v. Bryant and Campaign for Southern Equality v. Bryant III, took aim at the whole law by arguing it violated the Establishment Clause of the First Amendment and the Equal Protection Clause of the Fourteenth Amendment. These prohibit government from favoring one religion over another and one group of citizens over another, respectively.

“(House Bill 1523) said that those three religious beliefs and no others get preeminence in Mississippi, and if you share one or more of them then you essentially get a free pass to do whatever the hell you want, no matter how discriminatory or offensive it is to your gay and lesbian neighbors,” said Roberta Kaplan, lead attorney on the Campaign for Southern Equality lawsuits.

“And because it has those elements, it is clearly, in our view and Judge Reeves’s view, a violation of this fundamental principle, one of the principles our country really was founded on,” Kaplan said. “It can’t preference one religion over another, it can’t take sides in religious debate, it needs to stay neutral. And that’s exactly what this statute does, it’s kind of a classic establishment clause violation.”

If there is no appeal, Judge Reeves’s ruling will mark the short, but controversial life of this law. Although the bill passed the Mississippi House and Senate with relatively little public scrutiny in late March, by the time it crossed the governor’s desk for his signature on April 5, #HB1523 had begun trending on Twitter as national media portrayed the bill as being “steeped in bigotry towards LGBT individuals.”

Over the next few weeks, more opponents of House Bill 1523 began to speak out. The Human Rights Campaign, which advocates for gay, lesbian, bisexual and transgender rights, compiled a list of companies critical of the law, while some Mississippians took their own forms of action. The Mississippi Picnic, a 37-year-old tradition held in New York’s Central Park, was cancelled over fear of protests and anger at the law’s passage. 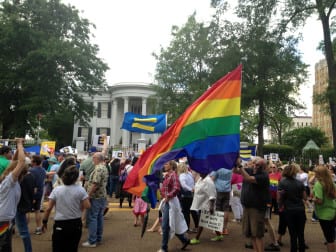 Approximately 300 people march in front of the Governor’s Mansion May 1 protesting House Bill 1523.

Concerned that the negative publicity could affect tourism, cities such as Natchez and Biloxi began to pass their own resolutions affirming a “commitment to diversity.”  On May 1, the HRC, along with allies such as the American Civil Liberties Union and Southern Poverty Law Center, staged a protest in front of the Governor’s Mansion. Chanting “no hate in our state,” more than 300 attendees implored Gov. Bryant to repeal the law.

But these requests went unanswered. The governor rarely spoke about the legislation, but when he did he stood by the law, like last month, when the conservative Family Research Council awarded Gov. Bryant its Samuel Adams Award for signing House Bill 1523.

“If it takes crucifixion, we will stand in line before abandoning our faith and our belief in our Lord and savior, Jesus Christ,” the governor said in his acceptance speech.

Other advocates of the “religious freedom” law said that the national attention — and fury — caught them off guard.

“If you notice, a lot of people that’s against the bill came out against it after it passed,” Sen. J.P. Wilemon, D-Belmont, said in April. Wilemon voted for a bill he said “fit” his beliefs.

“We didn’t hear a word about it until the bill passed. But it’s a lot easier to come out and say you’re against something (after it’s passed).”

As the national spotlight was trained on the controversy, behind the scenes opponents of the law were preparing for a different battle — in federal court. On May 9, the ACLU filed the first lawsuit challenging the law, arguing that the “religious exemption” stigmatized gay and lesbian Mississippians, treating them with a different set of standards. Last week, Judge Reeves denied their request for a preliminary injunction on the basis that the plaintiffs, who said they were seeking to marry in the next three years, were not in “immediate harm.”

One day later, the Campaign for Southern Equality filed a motion to reopen the 2014 lawsuit that overturned the state’s ban on gay marriage and asked Judge Reeves to apply his ruling in that case to this one. This was the first challenge to get a hearing, and as of Monday the first to invalidate part of the law, when Judge Reeves ordered that all 82 county clerks must issue marriage licenses to same-sex couples.

But the centerpiece of the fight against House Bill 1523 were the two lawsuits Judge Reeves ruled on Thursday, Barber v. Bryant and Campaign for Southern Equality v. Bryant III. Filed within days of each other just three weeks ago, these lawsuits were the first to use the First and Fourteenth Amendments to challenge what legal scholars have called a “blatantly unconstitutional” law.

“The Establishment Clause and Equal Protection — it’s an obvious violation,” said Matt Steffey, a constitutional law expert and Mississippi College of Law professor earlier this month. “It’s really a mishmash of constitution problems. I do not believe it will see the light of day.”

And while it didn’t, both its opponents and supporters agree that for a law that never took effect, it will leave a significant imprint on the state of Mississippi.

“It’s very interesting. It’s been an incredibly divisive bill,” said Rob McDuff, co-counsel on Barber with the Mississippi Center for Justice. “I think it has encouraged a greater level of discrimination against gay and lesbian Mississippians than existed already.”

“On the other hand, there was a tremendous outpouring of opposition to this bill by straight people, gay people, lesbian people, transgender people, throughout the state and that was surprising to me. And I think it’s encouraging in terms of our prospects for the future.”